Greenlight > Games > Soldak Entertainment's Workshop
Greenlight is being retired. For more information on how to submit games to steam, refer to this blog post.
This item has been removed from the community because it violates Steam Community & Content Guidelines. It is only visible to you. If you believe your item has been removed by mistake, please contact Steam Support.
This item is incompatible with Greenlight. Please see the instructions page for reasons why this item might not work within Greenlight.
Current visibility: Hidden
This item will only be visible to you, admins, and anyone marked as a creator.
Current visibility: Friends-only
This item will only be visible in searches to you, your friends, and admins.
Drox Operative
Description Discussions4 Announcements22 Comments423 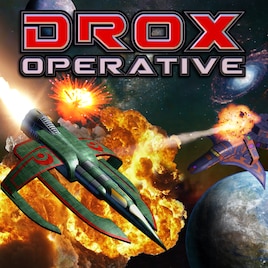 Soldak Entertainment
Offline
See all 30 collections (some may be hidden)

View Drox Operative in the store

Since the last official patch, the patch fixes a bunch of minor issues.

We now have a Drox Operative: Invasion of the Ancients demo and an updated Drox Operative demo available! If you haven't checked out Drox yet or haven't in a long time, now is a great time. The demo
is only 140MB, so there's no reason not to give it a try.

Before the Drox ruled the galaxy, before they were even sentient, there were older races now known as the Ancients. Using their Operatives, the Drox crushed and enslaved most of these races. The rest fled known space. When the Drox turned on their own Operatives, the Drox were utterly destroyed. Newer races emerged and thrived in the power void, never knowing the menace waited. Seizing their chance, the Ancients are invading to take their rightful place in the galaxy, as rulers! Thirsting for revenge, the Ancients can't harm the extinct Drox, but they can crush the next best thing, the Drox Operatives.

The Ancient enemies are back! Can you defend the Drox Operative Guild and younger races against the Invasion of the Ancients?

Eons ago the Drox ruled the galaxy through their mighty Operatives. These elite starship captains were trained to accomplish the impossible at whatever cost necessary. Whether employing stealth or brute force, they were always deadly. Using these Operatives, the Drox built a starlane system for quick travel amongst the stars, colonized and conquered millions of planets, and ruled the galaxy with an iron grip for over 100,000 years. Eventually realizing their Operatives were a threat, they attempted to assassinate all of them. They failed. The following Galactic Civil War was devastating.

Thousands of years later, the Drox are extinct, but the secretive Drox Operative guild lives on. They have learned their lesson though: loyalty to any one race is foolish. They now work for whoever can pay. And pay they do! Empires might span hundreds of planets and thousands of ships, but when a critical task arises, they still turn to an Operative.

In the new space race, the major races are scouting, colonizing, and expanding, trying to take over the galaxy by diplomacy, technology, war, or any other means their scheming minds can contemplate.

As a Drox Operative it's NOT your job to manage all of those annoying people, build thousands of buildings, play nice with your enemies, or balance the budget. It IS your job to pick the winning side and maybe even help them conquer the galaxy if you're being nice, more importantly though is to rake in as many credits as possible, well that and build the coolest, deadliest ship in the known universe. Not many screw with an Operative captaining a Dreadnaught!

Press:
Rock Paper Shotgun - "It’s the advancement of the genre that so many people have given up on searching for and Soldak have been providing it for years."

IncGamers - "This is the direction in which I want to see more aRPGs taken; marrying established conventions to a wider context and broader ideas."

RPG Codex - "I can heartily recommend this game to everyone who played and enjoyed any of the previous games by Soldak Entertainment."

Why has this game still not been recognized?
Ussu

Drakken Apr 16, 2014 @ 3:20am
This game is remembering me "Space Rangers", and i liked Space rangers..
I may buy this game a litle later since i have my hand full with games for now.

Soldak Entertainment  [author] Feb 20, 2014 @ 12:44pm
I'm not sure anyone will see this since we are now live on Steam, but I greatly appreciate all of the votes and kind words that helped us get Greenlit!

catwhowalksbyhimself Feb 11, 2014 @ 5:50pm
Finally! Should have been sooner, IMO, but glad that it's happening.

com truise Feb 11, 2014 @ 5:01am
Great news and congrats on the greenlight! This game is so unique & fun to play, it deserves a much wider audience.

Drox Operative has been Greenlit and is now listed in the Steam store. For the latest information, purchase options, and discussions for Drox Operative, please see it on the Steam Store or in the Steam Community.
Visit Store Page
For more details Visit Community Hub
For latest discussions
If you really, really want to, you can continue to the Greenlight page. Information on this page may be out of date, since all the action has moved to the areas noted above.