Store Page
Total War: WARHAMMER II>  Workshop > Iron's Workshop
This item has been removed from the community because it violates Steam Community & Content Guidelines. It is only visible to you. If you believe your item has been removed by mistake, please contact Steam Support.
This item is incompatible with Total War: WARHAMMER II. Please see the instructions page for reasons why this item might not work within Total War: WARHAMMER II.
Current visibility: Hidden
This item will only be visible to you, admins, and anyone marked as a creator.
Current visibility: Friends-only
This item will only be visible in searches to you, your friends, and admins. 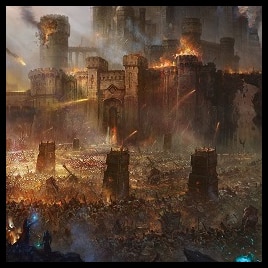 This item has been added to your Subscriptions. Some games will require you to relaunch them before the item will be downloaded.
In 1 collection by Iron
Warhammer 2

29 items
Description
This mod provides the following:
- City garrisons that provide an immersive reflection of the city's place and purpose in your empire, instead of cookie cutter copies in every city.
- A varied experience when assaulting or defending cities instead of fighting or commanding the same lineup of defenders in every battle.
- A Hero commander for every single garrison. (No army should be missing a commander in Warhammer. What are they thinking?)

This mod strips down the garrisons provided by the Settlement building chain for every faction to a smaller base of core troops, but almost every structure you build in your cities will provide garrison units of their own and upgraded building chains will provide better guardians. These defenders will represent the buildings they come with, perhaps hired guards for economic building chains and perhaps unique units in residence or in training for military structures.

Military infrastructure will provide the best garrisons while economic will provide the worst, and other buildings will be in between, so a city focused on troop recruitment and army support will logically be a tough target to assault, while cities focused on trade and industry will be more vulnerable to attack and require a watchful eye.

Naturally, cities with more building slots will grow to have larger garrisons, meaning that capital cities will obviously end up with better garrisons than other cites. To give the player more choice in this, the garrison structures for smaller cities (4 building slots), have been left as strong as they are in the base game so that players have the ability to make any city a well-defended stronghold if they are willing to dedicate 1 of their 4 valuable building slots to defense. The defense building chains in major cities now provide fewer, but more elite, units than the base game, and still upgrade walls and siege holdout time as normal.


FAQ
- Save game compatible
- I do not know about compatibility with other mods, just try it
- Greenskin garrison units that require certain technologies before they are available for recruitment will also not appear in their proper garrisons until those technologies are researched. Until the research has been finished, the structures will not list the missing unit. Example structures that will gain their missing units after the proper research are: Goblin Workshop, Sacred Spider Grounds, Squig Cages.
- Province capital walls have no more than 3 units by design while minor settlements have a larger amount of lower tier units. Province capital walls add elite units to the garrison instead of many core units, and province capital walls have less opportunity cost than minor settlement walls. This also prevents province capitals from going over the 20 unit limit.


Other Mods by Iron

Suggestions for a few changes in the mod
LockTheReliquary
< >
283 Comments

Stubborn Pirate Feb 27 @ 1:02pm
Eltharion doesn't seem to get garrison troops for his mistwalker buildings. Might be intentional just thought I'd check.

Archa0n Jan 29 @ 10:46am
@Iron Think I found the another building that might missing unit or two for a garrison. It's a landmark "Pfeildorf Wine Market" in, well, Pfeildorf in Solland province.

Iron  [author] Jan 17 @ 8:26am
@Archaon yeah, I dont recall that unique port so you are probably correct. Adding it to the list

Archa0n Jan 16 @ 1:04pm
It looks like landmark available for everyone, not just dark elves, so possibly everyone got no garrison from that port.

Archa0n Jan 16 @ 1:02pm
Found another possible building with no garrison. A unique port at Dragon Fang Mount, where Malus starts.

Archa0n Jan 13 @ 9:26am
Not sure if someone already mentioned it, probably did, but T5 dwarf ports possibly got no garrisons, while T3 got 2xQuarrellers. Maybe it's just like with with arachnarok spider for orcs and T5 port garrison is there, but require some other building for it to "show up"?
< >