Greenlight > Games > Astral Projection's Workshop
Greenlight is being retired. For more information on how to submit games to steam, refer to this blog post.
This item has been removed from the community because it violates Steam Community & Content Guidelines. It is only visible to you. If you believe your item has been removed by mistake, please contact Steam Support.
This item is incompatible with Greenlight. Please see the instructions page for reasons why this item might not work within Greenlight.
Current visibility: Hidden
This item will only be visible to you, admins, and anyone marked as a creator.
Current visibility: Friends-only
This item will only be visible in searches to you, your friends, and admins.
Galactic Arms Race
Description Discussions8 Announcements10 Comments719 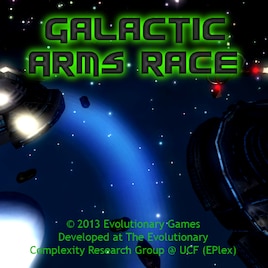 The game is currently ready to release except for a pricing bug in the store that we inadvertenly stumbled upon. Awaiting Valve to address the issue then the game will be live, finally. ;)

- if you find a new verified bug in the game, you get 2 Steam Product Codes to sell, trade, give away, or whatever
- report bugs in the Steam forum or by emailing gar@eecs.ucf.edu
- first to report the bug gets the bounty

Players pilot a GunShip and battle aliens, pirates, and other villanous enemies, to gain levels, skills, and most importantly, discover unique and potentially more powerful weapon systems to outfit their GunShips. Through the unique cgNEAT content-generation technology, new weapons are constantly created by the game automatically.

A key objective of this game is to explore the potential for automated content generation technology to intelligently create content for games. In GAR, all player weapons are generated by the cgNEAT algorithm based on weapon usage statistics. However, cgNEAT does not simply respawn weapons that people like. Rather, it creates new weapons that elaborate on the ones that have been popular in the past. You can read more details about how weapons are evolved on the research page.

GAR combines elements of old-school space shooters like Star Control, action-RPGs like Diablo, and open-world space adventure games like Freelancer. The graphics are fully 3D but in top-down or "2.5D" mode. The chase camera and movement interface is similar to many online RPGs such as WoW. Earn ranks and credits by completing missions and destroying enemies. Use the credits earned to upgrade and customize your gun ship.

The game progresses through different and increasingly challenging solar systems. Throughout the galaxy are various factions, both friendly and hostile.

GAR game modes include (1) single player campaign mode, (2) instant-action system defense mode, and (3) multiplayer mode for up to 32 players with both coop and PVP. You can run your own Galactic Arms Race galaxy by downloading the standalone server. A simple windows GUI makes it easy to administrate your galaxy.
< >
719 Comments

Foxhack Jun 5, 2014 @ 11:51am
Cool! Thanks for confirming that. And that's easy to fix! Just have them add the new app id to the old one that was activated with the CD key.

You should make a post about that in the game forums, by the way! Make sure people know this so there's no drama. :)

Astral Projection  [author] Jun 5, 2014 @ 11:49am
Uh yeah, we are gonna try to work that out with Valve. They gave us a new App ID when the game got Greenlighted. Gonna see if migrating the keys we gave out over to the new App ID is possible.

But, it is the exact same game no difference. It kinda sucks though because I don't think the achieves will be public for the test version. ;(

Astral Projection  [author] May 23, 2014 @ 6:39am
@KinWayloW - game is ready to release. There's some type of glitch with our Steamworks store front that Valve is fixing. Not sure what the deal is, but shouldn't take too long ...
< >

Galactic Arms Race has been Greenlit and is now listed in the Steam store. For the latest information, purchase options, and discussions for Galactic Arms Race, please see it on the Steam Store or in the Steam Community.
Visit Store Page
For more details Visit Community Hub
For latest discussions
If you really, really want to, you can continue to the Greenlight page. Information on this page may be out of date, since all the action has moved to the areas noted above.