Greenlight > Games > Strife's Workshop
Greenlight is being retired. For more information on how to submit games to steam, refer to this blog post.
This item has been removed from the community because it violates Steam Community & Content Guidelines. It is only visible to you. If you believe your item has been removed by mistake, please contact Steam Support.
This item is incompatible with Greenlight. Please see the instructions page for reasons why this item might not work within Greenlight.
Current visibility: Hidden
This item will only be visible to you, admins, and anyone marked as a creator.
Current visibility: Friends-only
This item will only be visible in searches to you, your friends, and admins.
Freedom Planet
Description Discussions26 Announcements15 Comments1298 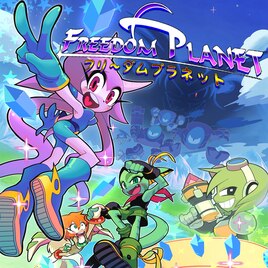 Strife
Offline
See all 149 collections (some may be hidden)
Kickstarter

View Freedom Planet in the store

Now that Freedom Planet is officially coming to Steam next year, we have created an official group page with all of the nifty features that other Steam games have. If you're excited about the game, please consider joining!

We have been hard at work integrating the game with Steam's interface, and so far it's looking good. In addition to Achievements, Steam users will also have access to Leaderboards for both the best times in each stage and the largest number of crystals collected. We are also looking into commissioning some artwork for Steam's trading card system.

Steam gave developers everywhere a pleasant surprise when they Greenlit a massive number of games at once, and guess what? Freedom Planet was one of them! We must extend a massive Thank You to everyone who helped push us into the Top 100! We couldn't have done it without you.

Another bit of good news that is Multimedia Fusion 2, the software we're using to create the game, has also been Greenlit, which means that they should be providing additional support for us to make sure that Achievements and other Steamy features work.

The 5th stage Jade Creek is halfway done, but we're holding off on the other half for now since it involves some plot-significant events. In the meantime, we have jumped ahead to to the 6th stage in line, Thermal Base. This underwater base mixes a ton of different elements together that are divided into different sectors. Players will need to unlock new sectors by collecting keycards from minibosses. Aside from that, the enemies are much trickier to deal with, and this is the first time that players will go toe-to-toe with Lord Brevon's troopers.

After Thermal Base, we have just three more stages to go in the main storyline, so we're getting there! About
Freedom Planet is a stylish platform adventure that pits a ridiculously fast dragon girl and her friends against an alien invasion force. Its retro-styled graphics, tight gameplay and charming characters make it feel as though you're playing through the golden days of the Sega Saturn or Playstation 1. The game features voice talents from around the web such as Sean Chiplock, Edwyn Tiong and Dawn Michelle Bennett, as well as sound designs from Akash Thakkar and gorgeous music composed by both Woofle and the game's producer Strife. Freedom Planet may only have a demo so far, but it has already tickled plenty of itches with its straight-to-the-point platforming action.

I see no reason why you shouldn't check out the demo right away.
~ Tony Ponce, Destructoid

What makes us different?
There's no shortage of platform games on the market, and a lot of them are fun experiences. So, what does Freedom Planet do differently from the vast ocean of indie platformers out there?

We jump in quickly with an equal mix of high speed action, platforming, and exploration. Most platform games focus mainly on one of these three elements, but with our 360-degree physics engine, we believe there is a lot of potential to mix them all into the same package. Imagine barreling down a road while being chased by a giant death laser, at which point you run up a wall and end up on several different routes depending on which direction you take and whether or not you decided to jump. Or, how about a room with ceiling crushers where you can either blast through them to cut down on time or chill on a bench and wait until the coast is clear? The kind of experience we're aiming for is one in which almost any action you take leads to something interesting.

Another notable difference Freedom Planet has is something we wish was more common in video games: Female heroes that are quirky and endearing. Each of the game's three playable characters - Sash Lilac, Carol Tea, and Milla Basset - have their own distinct ways of overcoming obstacles and discovering secrets.

The Story
The ruthless warlord known as Lord Brevon has crash landed on the world of Avalice. His surviving crew learns of three nearby kingdoms - the water city of Shuigang, the forest metropolis of Shang Mu, and the sky nation of Shang Tu - that are powered by an artifact known as the Kingdom Stone. Brevon sets in motion a sinister plan to manipulate the three kingdoms into attacking each other, knowing that when they are weakened, he can take the stone and use it to repair his dreadnought.

Meanwhile, two young girls, Lilac and Carol, are on their way to the annual pilgrimage to the Kingdom Stone - not to pay tribute, but to steal money from the rich so that they can continue to live by themselves in their treehouse. Along the way, they notice an airplane falling from the sky! They race across the valley to rescue the pilot, Torque the Shellduck. Little do they know that Torque is the only one who knows about Brevon's plan, and he cannot stop him alone...

DemonKiller Jan 2, 2015 @ 2:44pm
this is like a sonic.It is no secret.it is even voluntary.this type of drawing that is called pixel art.it's old school nostalgia.I'm not too much for the game clones but if it is a good clone I see no inconvenience.

Freedom Planet has been Greenlit and is now listed in the Steam store. For the latest information, purchase options, and discussions for Freedom Planet, please see it on the Steam Store or in the Steam Community.
Visit Store Page
For more details Visit Community Hub
For latest discussions
If you really, really want to, you can continue to the Greenlight page. Information on this page may be out of date, since all the action has moved to the areas noted above.