Store Page
RimWorld>  Workshop > roolo's Workshop
This item has been removed from the community because it violates Steam Community & Content Guidelines. It is only visible to you. If you believe your item has been removed by mistake, please contact Steam Support.
This item is incompatible with RimWorld. Please see the instructions page for reasons why this item might not work within RimWorld.
Current visibility: Hidden
This item will only be visible to you, admins, and anyone marked as a creator.
Current visibility: Friends-only
This item will only be visible in searches to you, your friends, and admins. 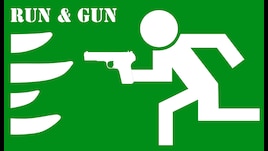 This item has been added to your Subscriptions. Some games will require you to relaunch them before the item will be downloaded.
In 1 collection by roolo
Roolo's mods

9 items
Description
Your colonists can never be a true Rambo if they cannot gun while they are running. Therefore, this mod adds a mode that, when enabled, allows drafted colonists and NPC pawns to shoot while moving at the cost of an accuracy and movement penalty . These penalties can be modified in the mod settings of this mod.

Changelog, manual download and older releases[github.com]
Overpowered?
Seriously, I get this a lot. But please, take a look at the mod settings, you can make RunAndGun as useless or as OP as you want. This makes saying that this mod is overpowered is as silly as saying your television is too loud because you never figured out how to tweak the volume. Also, don't forget enemies also run and gun. At its default settings RunAndGun may make the early game easier as it makes kiting easier. But during later games it makes large raids much more chaotic and harder to handle.

Some things to take into account
- NPC pawns are also capable of Running and Gunning. This can be disabled in the mod settings if that is too intimidating for you.
- Fire at will should be enabled. Firing manually will cause the pawn to stop running.
- Run&Gun mode can only be enabled when the pawn is drafted, and is carrying a ranged weapon in its hands.
- The movement penalty is only applied at the moment the pawn is actually shooting or cooling down after shooting. So don't bother disabling Run&Gun every time you just want your pawn to walk somewhere.
- The accuracy penalty is only applied when pawns with RunAndGun enabled are actually moving, so don't bother disabling RunAndGun every time a pawn stands still while shooting.
- The movement penalty depends on the heavyness of a weapon. A weapon can either be heavy or light. Light weapons get a lower movement penalty compared to heavy ones. What is considered a heavy/light weapon can be configured in the mod settings.
- Enemy pawns will also run and gun while fleeing. However, the chance that they do this can be configured in the mod settings.
- By default, RunAndGun can be activated with any weapon. RunAndGun can be forbidden for certain weapons in the mod settings though.

B18 VERSION
The B18 version can be found here:
https://github.com/rheirman/RunAndGun/releases/tag/v0.18.3.4

Known issues
All issues communicated to me that I could reproduce are solved as far as I know. This does not necessarily mean no issues exist. Please let me know if you find any issues. I want them gone as bad as you.

Dependencies
This mod depends on Hugslib, so make sure that mod loads before this mod does.

Compatibility of saves and other mods
- Is compatible with existing saves.
- Works very well with Giddy-up! Battle mounts, as it allows pawns to shoot while riding.
- No known compatibility issues with other mods. Please let me know if you find any.

Upcoming Features
I would like to implement the following features but do not promise anything. The list is ordered by priority (highest priority on top).

-Allow the AI to use RunAndGun, can be turned off in the mod options
-Option in the mod settings that can toggle if enemy pawns can fire while they are fleeing
-Make the movement penalty dependent on the gun that is being used (suggested by: Not Birthday Boy (Alfons)).
-Adding a mod option that allows users to forbid RunAndGun for certain weapons.
-Extra movement penalty when pawns are shooting while running backwards.
-Making the movement and accuracy penalty dependent on the shooting skill while allowing users to configure this.
-Allowing melee weapons to be used while running.

Credits
- Pardeike a.k.a. Brrainz for creating Harmony on which this mod relies so much.
- UnlimitedHugs for creating Hugslib, and saving me a lot of time.
- The translators for making this mod accessible for a larger audience and doing a great job.
- Anyone else providing feedback and support!

Contributing
-Translations are very welcome. You can make a pull request on github if you want to add in translations, or you can contact me by sending a friend request.
-If you developed a mod adding animals, you can contact me so we can make a patch that ensures that the default mod options (forbidding animals and setting drawing priorities) are configured well for your mod.
- If you really like my mods, please consider buying me a coffee. Instead of buying a coffee, I might buy my girlfriend a treat if I get too absorbed in modding to her taste again. But hey, that is also in your favour :).

No longer active as modder
I'm currently no longer active as modder. I'm developing my own game now and I have an almost full time job, so I don't have time to keep maintaining my mods. Since there's no indication of any new versions of Rimworld in the near future, this shouldn't be a problem for most players. However, newly released mods could be incompatible.

If you want to maintain this mod or expand it, please contact me.

Please read back comments if you have questions, and help each other when you know the answer to questions other people have.
Popular Discussions View All (2)

Heart of Mud 2 hours ago
thanks for your mod roolo

[Oath] Gaminnewf 3 hours ago
Thanks for updating! The game felt empty without it!

Nyoj 3 hours ago
Great !!! i cant play rimworld without this mod anymore

Ossian 3 hours ago
Hello. Thanks for your great mod. Can you please add an option so the RunAndGun can be set to on by default?

roolo  [author] 4 hours ago
I did some tests, and the 1.1 version seems to still work for 1.2 (like some people suggested). I updated the mod so that 1.2 is officially marked as supported.

Nitram99 18 hours ago
When checking around some more it seems like its "Ore Yields" mod that causes problem with your mod. Apperently many mods get messed up with "Ore Yields" mods installed after the 1.2 version update of the game.

Nitram99 18 hours ago
It seems like the mod "Ore Yields" conflicts with your mod. When both are active the mod doesn't show up in the list of mods to change settings for in the Mod Settings button. I this issue even show up when I only have HugsLib correctly listed and installed and those two mods. And for some wierd reason my pawns sometimes just face north and do nothing when trying to haul something with both these mods installed.
< >