Store Page
American Truck Simulator>  Workshop > Keeper1st's Workshop
This item has been removed from the community because it violates Steam Community & Content Guidelines. It is only visible to you. If you believe your item has been removed by mistake, please contact Steam Support.
This item is incompatible with American Truck Simulator. Please see the instructions page for reasons why this item might not work within American Truck Simulator.
Current visibility: Hidden
This item will only be visible to you, admins, and anyone marked as a creator.
Current visibility: Friends-only
This item will only be visible in searches to you, your friends, and admins. 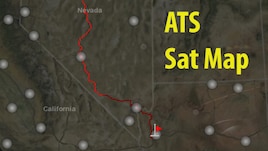 Keeper1st
Online
See all 129 collections (some may be hidden)

This item has been added to your Subscriptions. Some games will require you to relaunch them before the item will be downloaded.
Description
This mod is a set of textures that cause the game to display a satellite terrain map with borders instead of the blank map with borders.

I spent a couple hours warping and tweaking a map image on top of the default, to get all the borders throughout the United States lining up as closely as possible. Less care was taken for areas outside the United States (and the map image used had no borders outside the U.S.), but they're nevertheless pretty good, so even using map mods should be enjoyable with this except in cases where the map mod makers have required a differently oriented map image. (Apparently this is the case with Mexico and Canada mods out there. Users have made custom mapdata files to get them to work with these images, which are aligned identically to the game's default map that already covers all of North America, so there's no real reason the map mod makers should require their own map orientations, but for some reason they do.)

To see the accuracy of the border alignments, look at this animation showing the default ATS map alternating with this mod's map: http://www.keeper1st.com/ats/atsmapanim.gif -- notice that this is not simply a case of slapping the game's border lines on a topographic map and hoping for the best, but having a map with borders already applied and lining them up precisely, e.g. see how the U.S.-Canada border on the northern edge of Minnesota is more detailed than the game's map. The bend in the border between California and Nevada is not aligned because SCS's map had it too far south to begin with, probably because of the issue mentioned below. These images put it topographically in the correct position.

There are a few issues because the in-game map is not entirely realistic. For example, when you zoom in you'll notice some roads in southern California appear to go into the Pacific Ocean, and the loop around Lake Tahoe by Carson City appears to be nowhere near Lake Tahoe. These situations are probably why SCS never included topographical maps themselves -- that and the fact that city placements often are far from realistic, e.g. Santa Cruz.

In order to keep the drawing of routes, city points and state names easily visible in the Freight Market view, the zoomed-out image was made more transparent. This means that, in the World Map view, the terrain appears darker (actually more transparent) when zoomed out all the way, then brightens when you zoom in.
< >
87 Comments

GT182 Apr 14 @ 12:59pm
I found the problem after it taking a day to download to my ATS. It's now activated and works. If anyone is having a problem while using the newest Project East mod, other than me, it must be place above the Project East mods being used... and that includes the Montana Expansion pack. The SCS updates and DLC maps won't cause problems for it. It's just Project East causing the problem.

Keeper1st  [author] Apr 13 @ 8:20pm
If a map mod changes the way maps are drawn, it could very well cause this to stop functioning. I haven't played the game in over a year other than to verify mods still work, but as there wasn't a major game update it shouldn't have stopped working only yesterday.

GT182 Apr 13 @ 9:01am
This mod stopped working in my ATS yesterday. Is that because of an update? I've had no problems until now, and have been using is since it 1st came out. Could Project East 0.4.7 and the Montana Expansion be the cause? It has worked ok with this mod before.

Keeper1st  [author] Feb 2 @ 11:36am
Someone made something like this for ETS2 -- not sure if it's on the Workshop or not. I modified theirs for my own install, to reduce contrast to keep the game-drawn lines well visible, but otherwise it works OK last I checked, which admittedly was quite some time ago.

Keeper1st  [author] Dec 21, 2019 @ 8:17am
Should be unless they changed the way the map is drawn. All of North America is already planned out in the game, so these textures replace parts that aren't even in the game yet, but will be as they are released.

Keeper1st  [author] Nov 9, 2019 @ 8:28am
I think those have a static background image which would make putting in a topographic map impossible.