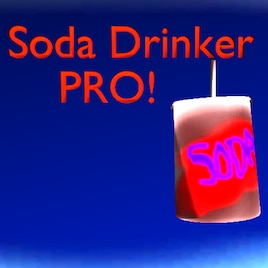 Soda Drinker Pro
Online
See all 5 collections (some may be hidden)
Thanks for your support!

We have been hard at work creating new worlds to explore as you experience simulated soda, but now you can help decide where those worlds will take place via custom made Soda drinking simulations!

By purchasing a custom made Soda drinking simulation level you are not only supporting the world of Soda drinking simulation, but also expanding the worlds in with people can truly experience simulated soda. Your level will be included in the next version of Soda Drinker Pro, you will also be listed in the credits of the game. You will also receive a free copy of the full version with all the new levels when it's released (estimated release date Sept 2013). The only rules are your custom level idea can't be anything that's copyrighted, or racist/hateful. Other than that there are no rules. You tell us where you want to drink a soda, and we'll create it.

Hi Everyone!
Just thought I'd let you know tomorrow May 1 I'll be doing an AMA on reddit at 3:30 pm est. It should be pretty fun if you want to check it out!

A little before 3:30 I'll post the link to the thread on Twitter @sodadrinkerpro if you want the link too.

Hope you can make it!

Thanks to everyone for checking out the game and voting for it too, you all rule!

Read More
Description
Release date: Early 2013
If soda Drinker Pro is Greenlit
100 Levels of Soda Drinking Experience
Will be Released!
Soda Drinker Pro is the leader in the (FPS) First Person Soda genre, drenching the player in a bubbly keg of soda goodness.
Think back to the days when virtual reality only existed in the Lawnmower Man.
If you wanted to experience an alternative reality you had to strap a pair of heavy goggles to your head just so you could play ping pong with a robot.
Those times have changed. You can now experience what you really want in your simulated experiences.

Soda Drinker Pro mixes the accuracy of Microsoft Flight Simulator with the soda of soda, leaving the player no longer thirsty and trapped in a beautiful world where they can experience every aspect of soda.
Tightly engineered controls allow the player to decide when to bring the soda cup to mouth, and when to sip.
Soda Drinker Pro even gives the player the much-anticipated ability to walk to the top of a hill and drink a soda at whatever speed they wish.
Anything is possible in soda drinker pro, and soda is possible.

Recent Press:
"If only there was a way to sip a refreshing cup of soda at the beach, in a park or in space without all the risk. Now you can, with Soda Drinker Pro, an exciting indie game poised to take the FPS (First-Person Soda) genre by storm."
- Mashable

"It Will Probably Change Your Life"
- Complex Magazine

Thank you for making this, this is just perfect!
- {LINK REMOVED}Indie-Impressions.com

"As you play Soda Drinker Pro, you go from thinking "WTF?" to a gradual acceptance of this unnatural world you've stepped into. I half expect to bump into

"Sounds like a lot of fun!"
- Wall Street Journal Live

You Need Soda Drinker Pro in Your Life!
- Indie Statik

"The true genius of this game lies in its plot. Finally something that isn't absurd, but rather a story we can all relate to. The main character was extremely like-able. I have not been this attached to a character that doesn't even talk since Portal. Simply amazing. 5/5. game of the mother F$@K#n year!"

"Soda Drinker PRO!, the finest soda-drinking simulation ever, is here and nothing will ever be the same"

"The world is totally open-ended. You can walk to the left or the right. You can even go front and back. All you have to do to win is drink your soda. Few

"The drinking game you must play"
- Airborn Gamer

"Humanity has accomplished a great deal in its relatively brief time on this planet. So it's refreshing to see we've even managed to wield technology so

advanced that we can properly simulate the act of walking around and drinking a soda."
- Phoenix Newtimes

Soda Drinker Pro  [author] Dec 29, 2016 @ 7:55pm
Thanks so much @Wowey! I was watching the stream today too, it's neat I've been a subscriber to the channel for a while so when I saw the notification in my email and saw the thumb from the game I was like WOAH! That was a fun stream! Thanks for tuning in and checking out the game, I super appreciate it!

Totdahl Dec 29, 2016 @ 1:51pm
GTLive just livestreamed this game, and I'm sold - this game is actually amazing. Never expected this. I would actually pay for this. Not to spoil it for anyone, but this soda drinker simulation has much more than meets the eye.


..I'll greenlight it if you put in achievements.