Store Page
Total War: WARHAMMER II>  Workshop > Mixu's Workshop
This item has been removed from the community because it violates Steam Community & Content Guidelines. It is only visible to you. If you believe your item has been removed by mistake, please contact Steam Support.
This item is incompatible with Total War: WARHAMMER II. Please see the instructions page for reasons why this item might not work within Total War: WARHAMMER II.
Current visibility: Hidden
This item will only be visible to you, admins, and anyone marked as a creator.
Current visibility: Friends-only
This item will only be visible in searches to you, your friends, and admins. 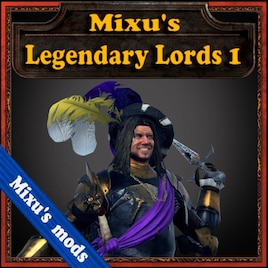 This item has been added to your Subscriptions. Some games will require you to relaunch them before the item will be downloaded.
In 1 collection by Mixu
Mixu's mods for warhammer 2

Characters will still be spawned without the unlocker, so you will only need the unlocker if you wish to start as them.

How to play as them?:
You'll need an unlocker, use my unlocker or Crynsos'


Compatibility with overhaul mods:
The mod will require a submod for major overhaul mods, you can usually find one if you just search it from the workshop.

This mod is compatible with the CTT - Boyz will be Boyz overhaul.
https://steamcommunity.com/workshop/filedetails/?id=1214959308

Submods:
Submods are obviously okay, same thing with translation mods.
Both of those types of mods should still require the original mod instead of including the entire mod, it is a "sub" mod after all.
There is no reason to include the entire mod, if you're making a submod.

F.A.Q
Mod no worky, plz fix
1. Use Kaedrin's mod manager aka KMM
2a. Disable other script mods, one of them may have broken scripts.
2b. If there's an actual bug, join the discord and we'll get it fixed.

I can't see X lord on the campaign map
It's caused by a script break:
1. Disable other script mods, one of them may have broken scripts.
2a. You might be suffering from "too much stuff happening at the same time" bug, try disabling a few big mods.
2b. There's an MCT option called "Perfomance mode", try enabling that.

I can't play as one of these lords
You need a unlocker for that, use mine or Crynsos'

Huge thanks to everyone who has helped making this mod!


Contact me / Bug Reports:
I rarely read comments here in steam, so it would be easier for everyone involved if you reported bugs n other stuff in
Da Modding Den discord, link to the discord here[discord.gg]