Greenlight > Concepts > ND's Workshop
Greenlight is being retired. For more information on how to submit games to steam, refer to this blog post.
This item has been removed from the community because it violates Steam Community & Content Guidelines. It is only visible to you. If you believe your item has been removed by mistake, please contact Steam Support.
This item is incompatible with Greenlight. Please see the instructions page for reasons why this item might not work within Greenlight.
Current visibility: Hidden
This item will only be visible to you, admins, and anyone marked as a creator.
Current visibility: Friends-only
This item will only be visible in searches to you, your friends, and admins.
Hellas
Description Discussions0 Announcements3 Comments83 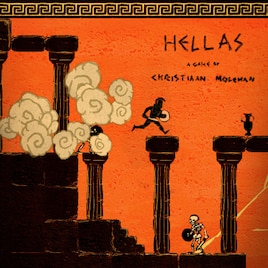 - destroy sacrifices to collect them

- VS: players drop helmet on death

There's also a new demo build, which includes some of the features in the video (though not the lion): http://forums.tigsource.com/index.php?topic=21485.0

- shield blocks from both sides

- vases leave a puddle of red wine when broken

- ZAP does 2x damage instead of instakill, costs 3 sacrifices

- increased max sacrifices you can carry to 5

- some changes to the Versus level

- other tweaks and fixes

Hellas is a platform/action game about Greek mythology that takes place on the surface of a black-figure vase. Explore the ancient myths and fight legendary monsters, or each other, with the help of the gods.

Think of lines in ancient texts like Zeus gave him strength or Athena guided his spear and take those completely literally. Play as a Greek hero and offer sacrifice to the gods in exchange for their favour. This is an attempt to recreate these famous stories as a game.

At this point the game has one single/co-op arena (basically a test level) and split-screen Versus.
Versus is played with two players: P1 on keyboard + mouse, P2 on gamepad... OR both players on gamepad.

I started working on this in July 2011 and have been making slow but steady progress since then. I've also kept a devlog on TIGSource since September 2011 where I post regular videos of the latest updates and various early art and other things as the game takes shape.

ND  [author] Mar 19, 2016 @ 3:21am
@Rishiness Progress continues slowly. Check twitter (@greekvasegame) or YouTube for the latest, or the TIGSource devlog.

Chef Boyardee Mar 18, 2016 @ 9:57pm
Is progress still continuing on this? It seems interesting to say the least

ND  [author] Dec 30, 2014 @ 6:52am
@PokemonTrainerWaluigi: Probably nothing that elaborate... but more subtle things, like going all the way around a vase and ending up in the same spot (which is already in the demo). A lot of that stuff isn't set in stone yet though so can't really promise anything specific.

PokemonTrainerWaluigi Dec 30, 2014 @ 3:46am
What in one level the vase is rolling down something and that makes the level a scrolling stage?

Mazereau Dec 22, 2014 @ 2:08am
Playing on a vase, what a great idea ! (Let you in the future thinking about the use of 2,5D or FEZ-like gameplay in order to follow the curve of the vase)
Could definitly be the next must-have platformer ! Good luck !