Store Page
rFactor 2>  Workshop > Postipate92's Workshop
This item has been removed from the community because it violates Steam Community & Content Guidelines. It is only visible to you. If you believe your item has been removed by mistake, please contact Steam Support.
This item is incompatible with rFactor 2. Please see the instructions page for reasons why this item might not work within rFactor 2.
Current visibility: Hidden
This item will only be visible to you, admins, and anyone marked as a creator.
Current visibility: Friends-only
This item will only be visible in searches to you, your friends, and admins. 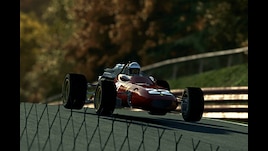 Postipate92
Offline
See all 33 collections (some may be hidden)

This item has been added to your Subscriptions. Some games will require you to relaunch them before the item will be downloaded.
Description
Update 1.2
Log:
-There was missing lines in rear suspension! Added :)
-New tires
-Added Shifter option what required clutch or rev matching! Very cool. (thanks for tip thunder bullet)
-Minor tweaks to audio side.
-Many many more tweaks that don't matter to anyone.

In general what you need to know:
Braking distances are longer
Need to have less speed in corners
Bit more top speed
Car is more steady under acceleration

Car will be now more steady under braking, but the distances are longer. Keep that in mind while racing ;)


Huge thanks for people who has joined the Ari's server. Has been sooo much fun to drive with you guys.
In future we will make small league series with these cars ;) So lets practice more!


Scratch made Ferrari 312/67 By Chief Wiggum and Postipate

PLEASE!!! READ LINK BELOW BEFORE DOWNLOADING!

After you have read the .pdf above you should join server:
-Ferrari_312/67_Official-

In 1966 season F1 regulations changed to allow naturally aspirated 3.0L engine. 1.5L turbo engines were also allowed, but no team used them untill Renault in late 70's. Ferrari made first 312/66 (312=3-litre, 12-cylinder) engine car for 1966 season, but the engine was rather heavy and low on power and especially on torque.
For start of 1967 season Ferrari made 312/67 version which had less weight (around 548 kg) and was one of the lightest car of the grid in 1967. Compared to last year car the car had some improvements. Chassis was around 50kg lighter and it had more horsepower and torque. Compared to other cars in 1967, it was still one of the less powered cars on grid and had lower torque than the competition.
This rF2 version is simulating the car in all good and bad way very accurately. Compared to BT20, the car is noticeable more powerful (about 90 bhp more) than BT20, but the handling isn’t the most precise. Cars chassis is bit rear heavy (40 kg heavier engine than in BT20), and the car don’t use engine as stressed member. Fuel tank is located at front, so notice that heavy fuel load will change car balance more to front.
This car is based on early Ferrari 312/67 which was 36-valve V-12 engine. Later of that year at Monza there was also version with more powerful 48-valve V-12 engine (about 410 bhp @ 10500 rpm)


HAPPY SIM RACING!
ps. If you have bad FPS, try to use medium of Full settings for your and opponent car

Donate to Postipate and Chief Wiggum if you like our work:
Paypal link:
https://www.paypal.me/postiandchief
< >
66 Comments

shovas Aug 5, 2018 @ 6:13pm
What a beast! The ferociousness starts with the sound then sits you back down with raw acceleration. Beautiful work. Insta-favourite.

Modders like him are what make me really hope S397 is able to effectively implement the third-party paid mod platform that they've been hinting at. It would be a real pleasure to be able to easily buy Posti and others like a beer for his continued efforts!

Jon Finlay Dec 30, 2017 @ 7:15pm
After I did a clean reset of my PC I was unsure whether I'd return to rFactor due to its addictive nature. But this car did it for me. An absolutely fantastic reproductation of the legendary Ferrari 312/67, both in terms of the model of the car itself and the physics. I personally prefer this to the Brabham BT20, and I've spoken to Postipate92 a few times via PM and he is 100% commited to realism, and I read that Chief Wigan spent four months modelling this car. But to fully appreciate it, you have to drive it at Belgium '66, no other track really does it justice. Pure exhilaration and I really hope others who appreciate this car make a donation. rFactor 2 is infamous for sub-standard mods, but this car exceeds expectations and surpasses even the official content.

Jon Finlay Dec 30, 2017 @ 7:15pm
I'm really hoping for more of the same, historic cars from the '60s. It's by no means an easy car to drive, but no car of that era was, and the challenge is the differential between arcade and sim, and thankfully this car falls firmly in the latter. If you enjoyed GPL, then you will absolutely love this car, especially at Spa '66. Little surpise it's number 1 in the most popular workshop downloads. Let's hope Studio 357 take heed of its popularity and focus more on sixties cars and tracks instead of its cringeworthy Formula Electric "cars"!