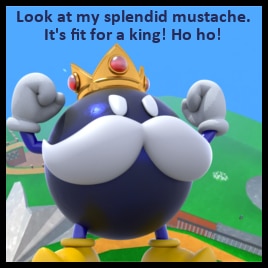 Scutlet
Offline
See all 47 collections (some may be hidden)
You need DLC to use this item.

This item has been added to your Subscriptions. Some games will require you to relaunch them before the item will be downloaded.
Description
Look at my splendid mustache. It's fit for a king! Ho ho! Your mustache makes you look like the peasant you are. What a sad little thing.
~King Bob-omb

UU: Chuckya (Replaces the Cannon):
A Siege Unit that really shines in terms of Utility rather than raw Damage.
After it attacks an Enemy Unit, it throws away an adjacent Enemy Unit at the end of your turn, dealing Damage to that Unit per travelled Tile and increasing if the Unit lands on a Land-Tile.
The thrown Unit will also receive a Movement Penalty the next turn if it lands on a Land-Tile. If stationed on a Hill, it can throw Enemies further away.

UB: Bob-omb Factory (Replaces the Factory):
Bob-ombs spawned in this City deal double their Damage when Exploding.
Increases the Production of Bob-omb Battlefield''s Unique Units by 50%, and is cheaper to Maintain and Produce.
Requires 3 Sources of Coal instead of 1.

Bob-omb's acquired through the UA:
A Civilian that replaces no existing Unit. Cannot be trained or bought, and is instead granted whenever Bob-omb Battlefield trains a Unit in one of their Cities. Two are granted instead if this is a Unique Unit, or if a Unique Building is constructed. Buying a (Unique) Unit or Unique Building does not spawn a Bob-omb.
Bob-ombs are suicidal Units that deal damage to adjacent Units by Exploding. Has limited visibility and gains the ''Short Fuse'' Promotion. Costs no Maintenance.
Short Fuse (promotion): Whenever any Enemy Unit enters a tile adjacent to this Unit, this Unit will lit its Fuse. 3 Turns later, this Unit will Explode, dealing 10 Damage to adjacent enemy Units.
If another Bob-omb happens to explode next to this Unit, this Unit will also Explode instantly, dealing 15 damage to adjacent Enemy Units.

Leader and Playstyle:
Bob-omb Battlefield is led by King Bob-omb. King Bob-omb is an easy-to-befriend Leader and a Loyal Ally. He won't be afraid to go to war, and is protective over City States. King Bob-omb likes leaders with splendid Mustaches like his. Bob-omb Battlefield has a tendency to start near Hills.
King Bob-omb shines in the mid-game Industrial Era, where he can finally utilize his Coal Bonus from his UA and where unlocks his Unique Building.
It ensures that he can build his Unique Unit, the Chuckya, faster which is a great Unit in terms of Utility and breaking through Enemy Defenses. It also makes sure that Bob-ombs spawned in that City deal increased Damage, which can quickly add up in terms of Damage once you have a few of them.
Bob-omb Battlefield is guaranteed to be a major powerhouse in terms of military strength in this era, so get ready to blow up warmongering foes with large Military Strength. Use your Bob-ombs defensively early, as you have relatively few bonuses pre-Industrial era.

Mod Compatibility:
- Compatible with DLL Mods, since this mod does not use one.
- Requires the Brave New World (BNW) DLC

Buxfixes:
No bugs reported or found yet

Possible Future Plans:
Add in Floaty text for the Short Fuse Promotions
Add in Specific Leader Diplomacy Lines towards other Mario/Nintendo civs in the workshop (similarly as in Typhlomence's Koopa Troop)

Credits
Nintendo: Most of the images, War theme, and unit selection sounds.
Typhlomence: Port of the Bob-omb model and UniqueDiplomacyUtils (and his Koopa Troop mod, on which the custom diplomacy lines were based.)
Firaxis: Many promotion Icons were based upon Firaxis's icons from Civ V
The Mario Wiki: Most of the information used in the Civilopedia entries.
Mario Fan Games Galaxy (Trasher specifically): Ripping the Unit selection sounds from SM64.
Whoward69: Custom DiploModifiers in VMC
Qumu: Bob-omb Battlefield Remix (Peace theme)
Coding, Editing, and Design by Troller0001
< >
13 Comments

Scutlet  [author] Apr 19, 2021 @ 5:56am
King Bob-omb can still build every other unit in the game (just like any other modded civ), with the exception of the Cannon (as the Chuckya replaces that).
The only unique models are for the Bob-omb units and the Chuckya. There's no unique models for all the other units as the scope of that would be way too massive.

Sherlock Halms Apr 18, 2021 @ 7:18pm
I LOVE IT but does he still able to produce normal units like swordsmen, nukes, planes and etc? wish it was full rework.

Scutlet  [author] Mar 25, 2021 @ 8:24am
( a bit late, I haven't logged into Steam for a while )
While I've not done the rig for the Bob-omb myself (that was Typhlomence), I did work on another rig that turned out pretty nicely for a first attempt (but is not in any released mod at the time of writing). This thread [forums.civfanatics.com] on CFC (part III: Converting from Civ IV) describes a rigging process quite nicely (although for an older version of Blender) even if you're not rigging a civ 4 unit (just skip over all the nifscope stuff in there).
You can shoot me a message on CFC or in the Velpline Modding Discord if you need further help

IVSTINIANVS Mar 5, 2021 @ 1:33am
Wow! You did it, I thought the project was dead, so the news came as a surprise, a welcome one! I'm planning to add 2 new civs to the game, too (probably gumba civ and the subspace army from ssbb) which should contain 3d models, too. So if you could tell me how to add 3d unit models to the game or give some tips, I would appreciate it a lot!
Anyways, have a nice day!

Scutlet  [author] Jan 12, 2021 @ 3:13am
This mod has been updated! The Bob-ombs and Chuckya now have an actual 3D model. Special thanks to Typhlomence who has ported the Bob-omb model over to civ V for the World accoriding to Modders (WatM) event!

(The Chuckya is a simple reskin of Typhlomence's Bob-omb model)

Scutlet  [author] Oct 26, 2017 @ 6:28am
I know there's a Mushroom Kingdom Graphics mod out there which places Goomba Unit-graphics in the game (for Barbarian Units), so I'm probably gonna end up looking in there as a base/reference. I've not played with it myself so I don't know how it actually looks like in-game, but from the showcase art it looks REALLY good. (Luckily for me, Goomba's share quite a few similair features to Bob-ombs. E.g. no arms or knees, and they're pretty round)
Don't expect much though till next week for sure, as I've got exams coming up which I'd like to pass

Kaizoku_Panic Oct 24, 2017 @ 11:41am
There are a few nice guides on how to utilize blender for that. The problem is that you'd need to use a certain skeleton and animation base for your fsxml files (like the lancer or spearman, whatever) and that'd be pretty hard for these uniques. But again, if you manage to pull it off, major kudos to you

@Kaizoku_Panic, finding a model isn't that difficult (quite a few models that were ripped from games like SM64/SMG are available online). Moving it into civ5 is probably what is gonna give me trouble, so I'll see if I get that done, if ever. You can of course expect a comment in this comment section if such a thing gets added

And of course thanks for your kind words