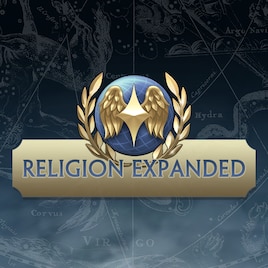 p0kiehl
Offline
See all 6544 collections (some may be hidden)

Additionally, the text of nearly every original Belief in the game has been updated to fix typos, be clearer, and make better use of existing font icons.

Religions Limit (Configurable in the Game Set-Up Menu)
PLEASE READ
This mod adds a slider in the game set-up menu to pick how many religions will be available in the game.
I highly recommend using Tomatekh's Historical Religionsto get the full experience.

New Pantheons
* Requires Gathering Storm (this Belief is a restoration of the original Oral Tradition ability). Additionally, Goddess of Festivals changed to +1 Food from Plantations.

Also, if Gathering Storm is active, Tithe is changed to: "+2 Gold for every 4 followers of this Religion."

Special Thanks
This mod would not have been possible without the enormous help of ChimpanG, who patiently taught me everything about editing 3D assets and making them appear in the game and encouraged me.

Other thanks go to:

SailorCat, for designing the beautiful logo for the mod, helping me test the mod and take screenshots, and bouncing ideas off of. SailorCat also wrote the Atashkadeh Civilopedia entry.

SeelingCat, for helping me name many beliefs and bouncing ideas off of.

Chrisy15, for creating the code that dynamically alters the amount of religions that can be founded.

Sukritact, for helping me fix asset errors and saving this mod twice.

Zebenji, for the French language translation.

Additional thanks to JFD, Tranquility, and others.

Want even more beliefs? Check out Ancient Egyptian Pantheons!, another mod I made that is fully compatible with Religion Expanded. It adds 10 new Pantheons.
Popular Discussions View All (7)

the mod is great, I like it a lot, everything works, but:

These pantheons are absurdly powerful:


Is there a way to remove them or at least to weaken them somewhat?

Endicott Sep 15 @ 3:06am
Hi everyone. This is a Great Mod but one thing I am missing is how are you supposed to go beyond 12 religions when only 12 Great prophets can be recruited? In my game now, with 32 civilizations, there are 12 religions founded, the religions say available 12/16, but no more Great Prophets. I was almost there with the Revelation Policy Card and would have made it easily to number 13 or 14. How can you found a religion after you run out of Great Prophets?

gheller93 Sep 10 @ 6:15am
Will you ever update religious community to match the current bonuses? Max +3 gold vs +8 seems kinda useless now

Рlαγζr 🐵 Jul 18 @ 3:04pm
I'm thinking this mod has stopped working as I have like a bagillion faith (500), a holy site, shrine, temple, not to mention others and no prophet. Yet Ragnar, the guy with only 1 city left who is taking too long to die because of lack of tiles to attack from gets a prophet to stand there on the 1 tile that he owns. Like what the hell? And I'm like #5 in faith so it's not like all the vanilla religion slots should be used up yet. Tell me if you don't get prophets during war or something lame like that.

H.Humpel Jul 14 @ 5:26pm
Hi p0kiehl et al,
your mod has been translated by Junky into German and the translation is now part of the German translations for Civilization VI mods mod pack.
We would be more than happy if you could refer to the language translation in your mod description.

metronome Jul 4 @ 5:26pm
Ok, thank you for the clarification.

p0kiehl  [author] Jul 2 @ 4:56am
No. As a Follower Belief it’s applied at the city level, just like the original Work Ethic which it was based off of (the current “Fruits of Labor”
belief)

metronome Jul 1 @ 8:41pm
Does the belief "Festival Processions" provide a 1% bonus per citizen to ALL CULTURE earned by a Civ? Simplified, does a total population of 100 citizens that worship that Religion yield a 100% increase in Culture per turn for the Founder of that Religion?

AwesomeDavid Jun 27 @ 6:48am
It seems that when starting a game in an era other than the ancient era, the game doesn't allow you to form as many religions as normal and this mod doesn't change that
< >