Greenlight > Games > Gaijin Entertainment's Workshop
Greenlight is being retired. For more information on how to submit games to steam, refer to this blog post.
This item has been removed from the community because it violates Steam Community & Content Guidelines. It is only visible to you. If you believe your item has been removed by mistake, please contact Steam Support.
This item is incompatible with Greenlight. Please see the instructions page for reasons why this item might not work within Greenlight.
Current visibility: Hidden
This item will only be visible to you, admins, and anyone marked as a creator.
Current visibility: Friends-only
This item will only be visible in searches to you, your friends, and admins.
War Thunder
Description Discussions57 Announcements3 Comments2578 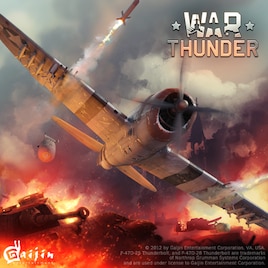 Gaijin Entertainment
Offline
See all 408 collections (some may be hidden)

View War Thunder in the store

War Thunder advanced through Steam Greenlight and was listed among brand-new titles to be offered via Steam services.

We are very grateful to War Thunder community and prepared a special present for you. From Feb. 27 16:00 GMT till 20:00 GMT next day Feb. 28 you’ll get +50% to experience gain for all aircraft of all nations in all game modes — Arcade, Historic and Full-Real Battles!

Pilots!
Recently the game has entered Open Beta for all English-speaking European and North America countries.
Also we have updated the game to 1.27 version.
1.27 introduces new locations, and a coolest new feature - controlling a plane after critical damages. Now, if your pilot is still conscious, you can control your aircraft even if it is one-winged or on fire!
In addition to that, we have added support of low-end videocards and integrated video (laptops). The minimum system requirements had dropped almost to toasters!

Read More
Description
Release date: 2013
War Thunder is an MMO combat game dedicated to World War II military aviation, armored vehicles, and fleets. Take part in all of the major combat battles, fighting with real players all over the world!

Following numerous requests from the War Thunder community we decided to take part in Steam Greenlight to bring the game to more players who value massive online combat action, realistic and dynamic gameplay and hi-end graphics.

You can play the game and make your own impression now!
Download it from {LINK REMOVED}http://warthunder.com/en/registration?r=greenlight


During the Beta Test more than 500 000 players had participated in more than 60 million fly-outs, spending tens of million of hours in the game; and the game has received more than thousand of updates, constantly adding new features and increasing quality of the game.

War Thunder offers a highly detailed and personalized aviation experience, giving players access to hundreds models of planes with detailed cockpits, dozens of upgradeable weapons, and flying skills that can be honed and improved with each mission. The massive historical battles featured in War Thunder cannot be fought by aviation alone, so the game will also expose players to combat on land and at sea.
Now, at the current stage of development all ground and naval forces are controlled by AI but later during the beta we are going to make them available for players as well as aircrafts.

War Thunder in its beta test features varied PvP-experiences set in full-scale combat missions. From fast, reckless and amazingly easy-to-start dog-fights in Arcade, to tactical and more challenging missions in Historical battles and completely genuine flight simulation experience in Realistic mode – every pilot will definitely get what they find most exciting and what they ask from a WWII flight-sim.
Multiple settings options allow advanced virtual pilots and beginners to enjoy playing the game together.
War Thunder also presents rich PvE-content: dynamic campaigns, solo missions, mission editor, and much more for single-player and cooperative gameplay.
The number of playable aircraft is now more than 200 and it will at least double by the release. Add to that all planes’ cockpits fully-identical to their real-life prototypes and dozens of armored vehicles and ships participating the action on huge painstakingly recreated locations of WWII theaters of war.
And for maximum immersion: beautiful hi-end graphics, authentic sound effects for all engines and guns, and beautiful music – we are doing our best to help our pilots feel like they are indeed fighting a war!

Community and gamers feedback are very important to us and so we have a lot of community related features in the game (and we will add more!).
Here are some examples of gameplay movies created by community, using replay feature:
http://youtu.be/mwbm6xSXabM
http://youtu.be/8ypABVvKGTA
http://youtu.be/0r9hsOqEv4o
http://www.youtube.com/watch?v=hItyYdQxABQ

See you soon in the skies of War Thunder and thank you for voting for us on GreenLight!
Try now on {LINK REMOVED}http://warthunder.com/en/registration?r=greenlight
< >
2,578 Comments

Mr Nic Dec 7, 2016 @ 9:29pm
hey can you friend me i have some questoins about the game that i need some help with todace

Gelathius Jan 23, 2016 @ 3:05pm
I wonder if we will be able to use ships since in the logo they have a ship and now we have tanks and getting more

SP1TF1RE Sep 28, 2015 @ 1:59pm
Great game! Highly recommend this to any historical aircraft buff! Graphics are fantastic and if you tire of aircraft battles there is always tanks or vice versa

War Thunder has been Greenlit and is now listed in the Steam store. For the latest information, purchase options, and discussions for War Thunder, please see it on the Steam Store or in the Steam Community.
Visit Store Page
For more details Visit Community Hub
For latest discussions
If you really, really want to, you can continue to the Greenlight page. Information on this page may be out of date, since all the action has moved to the areas noted above.