Store Page
Total War: WARHAMMER II>  Workshop > Zarkis's Workshop
This item has been removed from the community because it violates Steam Community & Content Guidelines. It is only visible to you. If you believe your item has been removed by mistake, please contact Steam Support.
This item is incompatible with Total War: WARHAMMER II. Please see the instructions page for reasons why this item might not work within Total War: WARHAMMER II.
Current visibility: Hidden
This item will only be visible to you, admins, and anyone marked as a creator.
Current visibility: Friends-only
This item will only be visible in searches to you, your friends, and admins. 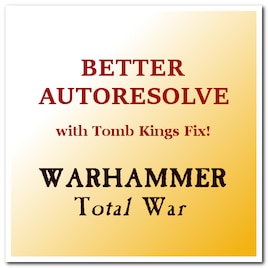 Zarkis
Offline
See all 4910 collections (some may be hidden)

This item has been added to your Subscriptions. Some games will require you to relaunch them before the item will be downloaded.
Description
IMPORTANT NOTICE
Since CA fixed a lot of issues with autoresolve in recent patches, I consider this mod as kind of outdated. You can still use it if you like it, but I don't think it is mandatory anymore.

CONTENTS
This mod makes the outcome of battles more similar to actually played battles but at a somewhat higher cost in terms of casualities. Therefore you are not forced to play battles you will win by a high margin anyway just because the AI gets a ton of extra bonuses against you especially on higher difficulties. Playing manually is still recommended when you want to minimize your losses.
This mod will also fix sea battles by taking away all those AI bonuses that allow inferior AI fleets to beat you. However, be carefull if you have an army with a lot of mounted troops since they are at a disadvantage at sea.

WHAT I CAN'T DO
There are several issues with auto resolve that can't be moded:

COMPATIBILITY
You don't need this mod if you play with SFO2 (it's already integrated). Works for WH2 and ME. Can be installed and uninstalled at any time. The mod is compatible with any unit mod.

DONATIONS
Buy me a beer for all the effort! Use the send money feature of PAYPAL[www.paypal.com] with this email: zarkis@online.de

Check out my other mods with many well thought out and balanced changes to campaign mechanics. And don't forget to like. :)
< >
441 Comments

Pimpin Pippin Nov 3 @ 8:22am
The last patch for total warhammer 2 is officially out, so please if you ever wanted to officially update your mods now is the ideal time :)

Jeslis Jul 4 @ 1:43pm
@Espiritviril; I used to think this was the case, but I'm pretty sure its just the AI has issues.

I stopped using this mod as much in my skaven playthroughs as this mod favors melee stacks more heavily.

When NOT using this mod; as Chaos with a 19 stack of Chaos Knights, Grimgor (with a waagh) and another lord (total 80 units) will attack my single lord, with an autoresolve bar that is only 20% red,and he will LOSE.

So its not just this mod causing wonky 'ai choice to attack' issues.

Espritviril``(in army for 6 mont Jul 4 @ 5:30am
First of all, I love this mod. It makes the game so much better by more sensible auto-resolves.. But I think that AI does not consider these new values, only the original ones when attacking. I see AI attacking me and other AI factions then they just get wiped. I think the AI thinks he is strong with vanilla auto-resolve modifiers so it attacks. But with this mod resolve, they get stomped and wiped. So AI often suicides itself thinking he is gonna win..

Wish there could be a way to change that but I guess its too hard to mod it..

Another issue is greenskins are so overpowered with this mod, I see them 1v2 all the time and winning every siege battle while attacking even when they are outnumbered.. They don't have waagh or anything just normal one stack. I think this mod makes their auto resolve too strong aswell.

Sadly I love this mod for myself but AI balance is so weird with it..

Pimpin Pippin May 21 @ 10:29am
Can someone familiar with data files please explain what does "autoresolver_ensured_unit_loss_damage_multiplier" affect?

I understand the words but i dont understand what it actually does.
Its set to 0 by default in CA files.

Pimpin Pippin May 19 @ 4:53am
As VCoast with this mod my mortars and cannons get barely 10 kills.
I dont know why is that so but it makes no sense that against low tier infantry spam VCoast artillery gets almost no kills.
When i manually play each artillery gets easily 100++ kills.

Lobuno Apr 21 @ 9:57pm
I don't think SFO integrates this mod, as described. Auto battle results are VERY different when I use this mod with SFO and when not.
< >