Store Page
Total War: WARHAMMER II>  Workshop > Cataph's Workshop
This item has been removed from the community because it violates Steam Community & Content Guidelines. It is only visible to you. If you believe your item has been removed by mistake, please contact Steam Support.
This item is incompatible with Total War: WARHAMMER II. Please see the instructions page for reasons why this item might not work within Total War: WARHAMMER II.
Current visibility: Hidden
This item will only be visible to you, admins, and anyone marked as a creator.
Current visibility: Friends-only
This item will only be visible in searches to you, your friends, and admins. 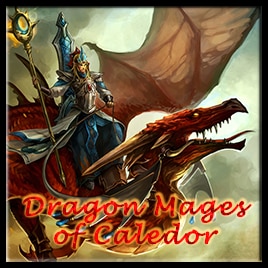 This item has been added to your Subscriptions. Some games will require you to relaunch them before the item will be downloaded.
In 1 collection by Cataph
Cataph's stable collection - WH2

49 items
Description
OH OH OH!
We begin our adventure on WH2 modding - that is not porting stuff already done for WH1, I mean - by adding a new Hero for the High Elves, as per title.

The Dragon Mages are princes of Caledor that are known not for original names, but for a pre-destined, sudden and impetuous affinity towards dragons and, just as predictably, Fire Magic. The Winds tend to stick to those with a kin temperament, and Caledorians are fiery enough to be favoured of Aqshy.

On the Tabletop, Dragon Mages were a beefy Hero choice with a pre-installed Sun Dragon mount and the option - hear hear - to buy dirt-cheap dragon armour, the same enchanted suit worn by Dragon Princes. Which conferred them unrivalled protection among casters, short of Chaos Sorcs and Vampires.


As for us, Dragon Mages are Nobles, so they can hunt for Influence or attack people and armies, and follow the same recruitment rules. But they're also - you don't say - fire wizards, so that's bound to count for something. Ah, and of course, they can get to ride a Sun Dragon.

Features:
- Fire Magic (starts with Sword of Rhuin).
- Starts out in robe.
- Can acquire Dragon Armour (heavy armour and special saves).
- Can acquire a barded dragon prince steed (added to fill the gap to...).
- Sun Dragon! at level 20 in campaign or for sizable sums in custom battle.
- Can take Reckless, a suicidal version of Arcane Conduit.
- Three variants and new Ward of Addaioth (replaces Loec/Hoeth).- Removes the sun dragon mount from the conventional fire mage UNLESS she's from Imrik's or Caledor factions.[www.patreon.com]

In both custom battle and campaign.
This is made for vanilla, compatible with most mods BUT not with any overhaul like Radious or SFO without specific submods. It IS automatically compatible with Boyz will be Boyz though.

Yes, the dragon armour locks down the armour ancillary slot. No cheating.

Note: the character's height is now based on Litharion's resize, so it's 15% less than vanilla giant heroes.

Have fun with your pyromaniac noble!

Usual thanks to all PFM and RPFM creators and helpers; to Marthenil for rediscovering the porthole settings.bin and to Crynsos for helping improve the process.

FOLLOW VIA PATREON BLOG![www.patreon.com]
Public posts include content details and chit-chat so no reason to miss on that!
Also, FEEL FREE TO JOIN THE DISCORD SERVER[discord.gg], intimate and growing modding plaza!

(the word 'Dragon' appears 15 times in this page.)

Darkflame Dec 28, 2020 @ 12:43pm
Hey Cataph I love this mod its one of my overall favorites! Any chance in the future seeing a dragon mage lord added to the roster?

Not sure about anyone else but I've really been hoping for "dragon dragon dragon". So glad to see it added.

Cataph  [author] Dec 4, 2020 @ 10:54am
- Dragonmage is now recruited from the dragon chain. Whatever didn’t work the other two times I tried this is now fine. Whatev.
- Still a noble but it fits them. The other tab is too crowded, plus probably still issues with female defaults.
- Fire Mage can get a Sun Dragon again, but only if they are recruited by Caledor or Imrik’s factions.
- dragon dragon dragon.
- Flipped the can_brace flips.

Lordmitch2 Nov 24, 2020 @ 10:10am
I think it would look better if the helmet is the same color as the armor. I find it annoying to have green armor and a red helmet as avelorn.

Lordmitch2 Nov 23, 2020 @ 4:54pm
Why does one of the variants always have a red helmet but different color armor such as green or blue when paying different factions? I feel the colors clash.