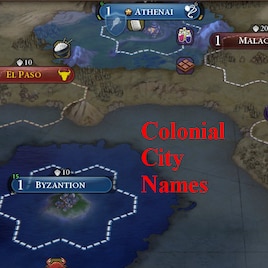 This item has been added to your Subscriptions. Some games will require you to relaunch them before the item will be downloaded.
In 1 collection by Chrisy15
Chrisy15's Misc Mods

3 items
Description
Adds Colony names for some Civs which will be used when settling on new Continents.

For example, when England settles a City on the same continent as London it will use a normal name; however, settling on a new Continent may cause the City to be renamed to Cape Town, or Jamestown, etc.

If you are not using various DLC, please say if you have any Colonies which have missing names; I have begun to cover for missing names, but it is possible that I have missed a few. Please provide the full name: "My city is called LOC something" isn't gonna cut it...

Credits:
Chrisy15: Code, Concept
SeelingCat, JFD, Whoever did CID's Colony Lists: City lists
JFD: Well, original idea I guess
SeelingCat: Forcing me to actually do it by giving me a ton of city lists :p
< >
36 Comments

Chrisy15  [author] Mar 13, 2018 @ 2:59pm
Many issues in that log, none clearly linked to Songhai; foreign key fails on CCN don't make sense since the CCN table doesn't use foreign key references for this exact reason, so maybe some other mod is creating the table incorrectly and giving it foreign key restraints or else you're using some kind of outdated version.

Chrisy15  [author] Mar 12, 2018 @ 4:31pm
How's it incompatible? If there just aren't colony names for Songhai, then that's just because Chimp didn't write any in; if there's specific errors, then I'll need details of them in order to do anything about it...