Greenlight > Games > Nyu Media's Workshop
Greenlight is being retired. For more information on how to submit games to steam, refer to this blog post.
This item has been removed from the community because it violates Steam Community & Content Guidelines. It is only visible to you. If you believe your item has been removed by mistake, please contact Steam Support.
This item is incompatible with Greenlight. Please see the instructions page for reasons why this item might not work within Greenlight.
Current visibility: Hidden
This item will only be visible to you, admins, and anyone marked as a creator.
Current visibility: Friends-only
This item will only be visible in searches to you, your friends, and admins.
Croixleur
Description Discussions16 Announcements14 Comments546 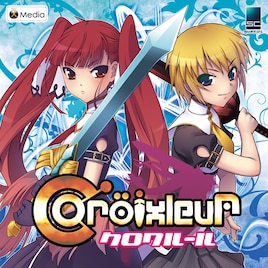 Nyu Media
Offline
See all 220 collections (some may be hidden)

View Croixleur in the store

Your is moe-infused twitchy arcade action goodness is now available here on Steam!

Anyone wondering about free Steam keys, please visit the stickied thread at the Croixleur Sigma discussion board here: http://steamcommunity.com/app/250640/discussions/0/540739405831638750/

A huge and hearty THANK YOU to everyone who supported Croixleur at Steam Greenlight. We've worked hard to exceed expectations for this release and we hope like it! If you do, please help spread the word! =)

Steam won't show the trailer until the game releases, but y'all can have an early preview right here:
https://www.youtube.com/watch?v=n0RCe47wTkc

FOR YOUR CONSIDERATION
Croixleur is a high-speed, hack-and-slash arcade action game by Japanese indie developer souvenir circ. Gameplay is reminiscent of the the Devil May Cry series' Bloody Palace mode as our protagonist, Lucrezia Visconti, battles her way through floors of ongoing monsters.
We released the very first English-localization of the game, which also features new, enhanced graphics on January 24th and a trial version is available now at http://croixleur.com - please check it out and vote YES for Croixleur to help us distribute this game on Steam!

Overview:
Tonight, in the Queen's realm of Ilance, two prodigies representing the Knight and Aristocrat factions will do battle in ‘the Adjuvant Trial’. This ritual, which has been held since the founding of the nation, decides which faction will hold military and political authority, and protect the Queen, the living symbol of the realm.
The fate of the nation is at stake as these two girls set aside their childhood friendship and undergo a trial in which there can be only one victor.

Story Mode:
Fight your way through the Adjuvant Trial to beat your rival Fran and claim victory for the Aristocrat's academy of Besier!
Defeat all the monsters on a floor to open a portal to the next stage. Multiple routes and endings await, depending on your performance!

Score Attack Mode:
Defeat as many enemies as possible within a 3 minute time limit and rack up the highest score you can!
The game ends when time runs out or when your HP reach zero.

Survival Mode:
Battle for survival against a never-ending swarm of monsters and score as many points as possible can before you are defeated!
The game ends when your HP reach zero.

Collect XP from fallen monsters to level up, discover new weapons with unique special attacks and collect coins which are exchanged for special attacks! Use your speed and skill to pound the oncoming monsters and advance to victory!

We are exploring implementing online support for leaderboards and Steam compatibility for the in-game achievements and hope to be able to promise these as added features if / when the game passes Steam Greenlight.

Release Details
Japanese games are at a huge disadvantage in Steam Greenlight, even at the best of times and we need YOUR support for Croixleur to successfully pass! Please vote YES for Croixleur on Greenlight! In Croixleur is available NOW, directly from http://croixleur.com and via GamersGate, Desura, and other distributors to follow.

** Once Croixleur passes Greenlight, we will provide Steam codes to anyone who purchase Croixleur through any other distributor!

On behalf of everyone at Nyu Media and souvenir circ., THANK YOU!

Synocure Jun 20, 2015 @ 1:43pm
This reminds me of Rozen Maiden ALiBAT in its playstyle. Great indie game. Please get this released!

Croixleur has been Greenlit and is now listed in the Steam store. For the latest information, purchase options, and discussions for Croixleur, please see it on the Steam Store or in the Steam Community.
Visit Store Page
For more details Visit Community Hub
For latest discussions
If you really, really want to, you can continue to the Greenlight page. Information on this page may be out of date, since all the action has moved to the areas noted above.