Greenlight > Games > Signs of Life's Workshop
Greenlight is being retired. For more information on how to submit games to steam, refer to this blog post.
This item has been removed from the community because it violates Steam Community & Content Guidelines. It is only visible to you. If you believe your item has been removed by mistake, please contact Steam Support.
This item is incompatible with Greenlight. Please see the instructions page for reasons why this item might not work within Greenlight.
Current visibility: Hidden
This item will only be visible to you, admins, and anyone marked as a creator.
Current visibility: Friends-only
This item will only be visible in searches to you, your friends, and admins.
Signs of Life
Description Discussions12 Announcements25 Comments1019 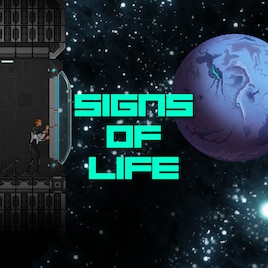 View Signs of Life in the store

Hey guys, we have some exciting news! Signs of Life is launching on Early Access on January 27th, and we can’t wait for you folks to get your hands on the game. We’ve been doing some small scale testing over the last month or so, which has provided us with enormously useful feedback. We feel like we’ve got a relatively stable, fun, satisfying experience, with plenty of room to grow in the future while we complete the game. I hope you’ll join us in shaping Signs of Life into something really special =)

Also, here are some sweet gifs of things we’ve been working on recently:

I posted another update on our site, check it out[playsignsoflife.com] if you want to see some cool stuff we've been working on.

Read More
Description
Release date: Early 2014
Signs of Life is a sci-fi survival sandbox platformer with a combination of procedurally generated and hand-crafted content. You'll explore mysterious locations, Mine blocks for resources, and meet strange (and some familiar) creatures, some of which don't even want to kill you and eat your corpse. Along the way, you'll be able to craft armor, weapons, gadgets and more to assist you in surviving in an inhospitable environment.

Story
Sensing that an apocalyptic war was imminent, the United Nations executed a last ditch plan to save what they could of the human race. 2 crafts were launched, a massive colony ship called the Hephaestus and a smaller, faster scout ship called the Hermes. The destination was a recently discovered earth-like planet with the potential to harbor life located roughly 18 light years away. The Hermes reached the planet first in order to establish a presence in anticipation of the arrival of the Hephaestus.

4 years later, as the Hephaestus approached its destination a faint signal was detected from a nearby asteroid. Against their better judgement, the crew of the Hephaestus decided to investigate, and in doing so set in motion a chain of events that would ultimately lead to their destruction.

The good news is, you managed to survive by hitching a ride on a small escape pod just in the nick of time. The bad news is, everyone you knew and loved is dead, you have nothing but the clothes on your back, a standard issue multi-function wrist laser and a faulty artificial intelligence companion named AGIS. Oh, and the human race is probably doomed.

Features
Current State of Development
We are still very much in development, and we would like you to join us in shaping the game from here on out =)
< >
1,019 Comments

DannerG Apr 21, 2014 @ 2:35pm
@Signs of life: i finally got the game but as i open it, it imediately said Signs of Life has stopped working. it might be a problem with my pc but i hope its not because then i cant play the game

Signs of Life  [author] Apr 6, 2014 @ 3:52pm
@TF3gamer: I believe the glitch you're talking about has been fixed, but if you see it again let me know. Sorry you missed the launch discount XD I'm sure it will be on sale again, but I imagine that doesn't help ya right now.

DannerG Apr 5, 2014 @ 9:03pm
btw i was watching a youtube vid and there was a small glitch where the guys old wood sword and scissors got into a basic smelter. its in early access so that probably makes sense

DannerG Apr 5, 2014 @ 9:00pm
good point. i didnt think about the inventory but atleast if u get a touchpad working for it i have a ps4 so thumbs up

Signs of Life  [author] Apr 5, 2014 @ 7:36pm
@TF3gamer: We'd like to try getting the steam controller working with Signs of Life at some point, but I am a bit worried that the inventory management might not work very well with a controller. The touch pads may work alright though, but I haven't tried one yet so I'm just speculating.
< >

Signs of Life has been Greenlit and is now listed in the Steam store. For the latest information, purchase options, and discussions for Signs of Life, please see it on the Steam Store or in the Steam Community.
Visit Store Page
For more details Visit Community Hub
For latest discussions
If you really, really want to, you can continue to the Greenlight page. Information on this page may be out of date, since all the action has moved to the areas noted above.