Store Page
Tabletop Simulator>  Workshop > error's Workshop
This item has been removed from the community because it violates Steam Community & Content Guidelines. It is only visible to you. If you believe your item has been removed by mistake, please contact Steam Support.
This item is incompatible with Tabletop Simulator. Please see the instructions page for reasons why this item might not work within Tabletop Simulator.
Current visibility: Hidden
This item will only be visible to you, admins, and anyone marked as a creator.
Current visibility: Friends-only
This item will only be visible in searches to you, your friends, and admins. 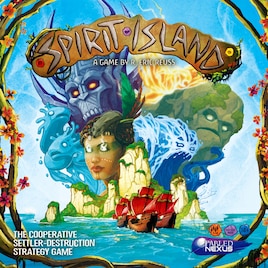 This item has been added to your Subscriptions. Some games will require you to relaunch them before the item will be downloaded.
In 2 collections by error
Solitaire Games

In the most distant reaches of the world, magic still exists, embodied by spirits of the land, of the sky, and of every natural thing. As the great powers of Europe stretch their colonial empires further and further, they will inevitably lay claim to a place where spirits still hold power - and when they do, the land itself will fight back alongside the islanders who live there.

Spirit Island is a complex and thematic cooperative game about defending your island home from colonizing Invaders. Players are different spirits of the land, each with its own unique elemental powers. Every turn, players simultaneously choose which of their power cards to play, paying energy to do so. Using combinations of power cards that match a spirit's elemental affinities can grant free bonus effects. Faster powers take effect immediately, before the Invaders spread and ravage, but other magics are slower, requiring forethought and planning to use effectively. In the Spirit phase, spirits gain energy, and choose how / whether to Grow: to reclaim used power cards, to seek for new power, or to spread presence into new areas of the island.

The Invaders expand across the island map in a semi-predictable fashion. Each turn they explore into some lands (portions of the island); the next turn, they build in those lands, forming settlements and cities. The turn after that, they ravage there, bringing blight to the land and attacking any native islanders present.

The islanders fight back against the Invaders when attacked, and lend the spirits some other aid, but may not always do so exactly as you'd hoped. Some Powers work through the islanders, helping them (eg) drive out the Invaders or clean the land of blight.

The game escalates as it progresses: spirits spread their presence to new parts of the island and seek out new and more potent powers, while the Invaders step up their colonization efforts. Each turn represents 1-3 years of alternate-history.

At game start, winning requires destroying every last settlement and city on the board - but as you frighten the Invaders more and more, victory becomes easier: they'll run away even if some number of settlements or cities remain. Defeat comes if any spirit is destroyed, if the island is overrun by blight, or if the Invader deck is depleted before achieving victory.

The game includes different adversaries to fight against (eg: a French Plantation Colony, or a Remote British Colony). Each changes play in different ways, and offers a different path of difficulty boosts to keep the game challenging as you gain skill.

A big thanks to @Vorg for his custom models of the City, Town, and Blight, and too @JJ.Sch for his Explorer! They look fantastic.
< >
53 Comments

Zubon Feb 15, 2019 @ 2:49pm
This is really great, thanks. I have played dozens of games using this set, which is far more convenient for solo than getting out the box. It even lets me teach friends how to play remotely before group games.

Colcoction Feb 5, 2019 @ 10:21am
Thanks for making this! For some reason it took me a few tries to successfully load the game without crashing, but once it finally worked (for no particular reason that I am aware of) it stayed working.

One bug report: When loading a save, the Fear card deck gets all messed up. It's like the system doesn't understand how the Terror Level cards are supposed to act as dividers in the deck, so it reorders them incorrectly.

jffdougan Jan 11, 2019 @ 5:17pm
@dramaru: The Progression decks only exist for the low-complexity spirits in order to help simplify a first game or two, while most of the basic mechanics are being learned. For any game with medium complexity spirits, and any time you're ready to do so with the low-complexity ones, when you gain a power card, draw 4 from the deck, choose one to keep, and discard the others. If the power you gained was a Major Power, then you must also Forget (permanently discard) a power you already own, whether in your hand or in your discard pile.

Dramaru Dec 30, 2018 @ 12:17pm
huge problems: i wanted to use one of the spirits beside the starting 4. where do i get the additional power cards? they are not distributed at the beginning

Kelann08 Jul 4, 2018 @ 11:02pm
Wonderful mod, thank you! Have you considered adding any scripting to the setup, particularly for the island boards?

Lilipea Jun 29, 2018 @ 11:00am
Spirit Island is an amazing game, I love it and I appreciate someone making it available on tabletop but we are having a problem while playing this simulation in VR. The auto-orient feature that orients cards and pieces to the "right" direction when you pick them up turns everything upsidedown. Is there any way to fix this?

Lena Jun 17, 2018 @ 6:23am
Player hands spawn underneath the board so if you drag a card to far down in the screen so that it gets put in your hand it falls of the board instead.
< >