Greenlight > Games > OTLGS's Workshop
Greenlight is being retired. For more information on how to submit games to steam, refer to this blog post.
This item has been removed from the community because it violates Steam Community & Content Guidelines. It is only visible to you. If you believe your item has been removed by mistake, please contact Steam Support.
This item is incompatible with Greenlight. Please see the instructions page for reasons why this item might not work within Greenlight.
Current visibility: Hidden
This item will only be visible to you, admins, and anyone marked as a creator.
Current visibility: Friends-only
This item will only be visible in searches to you, your friends, and admins.
Boo Bunny Plague
Description Discussions1 Announcements10 Comments338 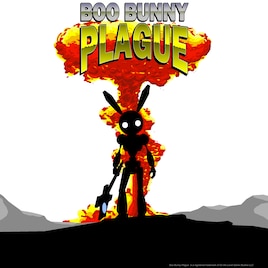 Pexle
Offline
See all 15 collections (some may be hidden)

On The Level Game Studio's store page is up and running with new content at this link:

The new trailer features a song not in the game created by Bunny and more gameplay! There are also new screenshots to check out.

We will also be showing the game at PAX Prime for those of you in Seattle Aug 29 - Sept 1!

Thanks for your support, and if you want to see more, please head over to http://onthelevelgames.com or bookface at https://www.facebook.com/OnTheLevelGameStudios

Thanks to you all we have now been greenlit! Look for further info to come! In the meantime, please feel free to follow us at onthelevelgames.com or our fadebook page at facebook.com/onthelevelgames.

Behold! - An animated Musical adventure through dimensions of time and space-time space! Join the robot Bunny, brought to artificial life and debatable intelligence by a Gates-Compatible virus, as he unravels a plot of treachery and deceit perpetrated by none other than THE ULTIMATE VILLAIN of the KNOWN UNIVERSE, and Earth! Armed with only his friends, Gunny, Faye and Ganesha by his side and a Slayer-worthy guitar in his hand, Bunny sets out to save the universe - if only to destroy it personally at a later date. Did I phrase that right? Because “destroy it robotically” just doesn’t… okay nevermind!

Boo Bunny Plague is a comedy action adventure game taking place across multiple dimensions and featuring a storyline with musical numbers. Yes, that's right! It IS a Musical...with plenty of blood and gore to lighten the mood!

Single player action/adventure through a planned 7 levels of fun and mayhem.

Pexle  [author] Sep 4, 2014 @ 10:33am
Boo Bunny Plague is now LIVE on Steam here !! The Deluxe version comes with a DC Comic written by Tim Seeley with art by Jon Sommariva, and a 31 song soundtrack!!

Pexle  [author] Aug 11, 2014 @ 8:36am
Much appreciated space ^ carrot! Won't be long now. Sept 4th is our scheduled release date right here on Steam! The Deluxe version will also include a digital comic book in partnership with DC Comics, and a 31 track soundtrack with liner notes from our audio director, Bunny.

MotoDestructo  [author] Jul 18, 2014 @ 9:45am
Thanks Fortysevens! Odd is one of our favorite words... just look at it's little vowel and double consonants existence... it looks, well... just odd!

Boo Bunny Plague has been Greenlit and is now listed in the Steam store. For the latest information, purchase options, and discussions for Boo Bunny Plague, please see it on the Steam Store or in the Steam Community.
Visit Store Page
For more details Visit Community Hub
For latest discussions
If you really, really want to, you can continue to the Greenlight page. Information on this page may be out of date, since all the action has moved to the areas noted above.