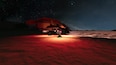 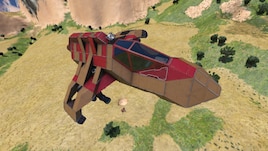 This item has been added to your Subscriptions. Some games will require you to relaunch them before the item will be downloaded.
Description
Another one of my older XWA designs rethought and redone. More info on the original can be found here: http://www.bluephantom.de/ships/dhilanisentinel.html

Background
The Dhilani Sentinel is a light and agile atmospheric fighter used by the Dhilani Empire as a fast patrol craft or scout on occupied worlds. Its speed, agility and an armament consisting of 2 gattling guns and a pair of missile launchers make it an dangerous foe to face. Further more a forward mounted camera allow for precision aiming. This, combined with an array of underhull lights and seach lights enable it to be deployed for nighttime assaults as well.

Not much more to say here, only that I had a load of fun testing it out and skimming through the narrowst of canyons.
Reactors and weapons can be refilled by a pair of access containers on top of the ship.
All relevant features are linked to the hotbar so the ship is ready for combat.

That's pretty much it. Now go out there and have fun!