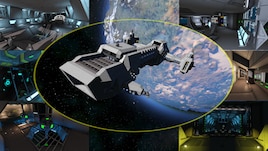 This item has been added to your Subscriptions. Some games will require you to relaunch them before the item will be downloaded.
Description
Background:
Derived from an armed freighter the Raptor-class Frigate is a medium capital ship used by Khetarian corporate militia as well as concern officials as a mobile base of operations to protect their most valuable assets in pirate infested sectors. Incorporating a host of offensive and defensive weaponry for area superiority its large forward hangar offers space for fighters or supply craft.

Raptor Frigates are to be regarded a hybrid between a frigate and a destroyer. While their slender shape seems disadvantageous under direct assault, it also reduces their overall profile, compensating for only moderate shielding. On the offensive the spread-out weapon layout allows for a wide firing arc for a majority of the ship's weapons.

This design, like several others of mine has been translated and slightly re-imagined from a model I made for X-Wing Alliance years ago, a link to which can be found here: http://www.bluephantom.de/ships/raptor.html
With a length of 175m this model is about 30% the size of its original model in order to make it more playable and less performance-consuming.

Features:
- atmosphere-capable and mostly survival-ready. (Parachutes are a post-finish addition so they're not connected to the conveyor system)
- Hangar bay & external refueling connector
- fully funcitonal red-alert and lockdown system, which can be toggled on and off. (Really happy how that turned out)
In addition to this, I have implemented a kill switch which will self-destruct the engine section, whereas the front section will remail pressurized and maneuverable, capable of making it to the nearest planet. (Hint: Above the Ship diagnostics display)
I HIGHLY recommend using this in combination with the DraygoKorvan's Jump Drive Critical Explosion mod ( http://steamcommunity.com/sharedfiles/filedetails/?id=646089317 ), as this will completely annihilate the rear half and pretty much cut it clean off at the blast doors.

As usual with my ships, it's completely mod-free, safe for a few scripts for displays and doors:
- Automatic LCDs 2 by MMaster's
- Phils_Ship_Diagnostics by Ph1L1P
- Whip's Artificial Horizon Script by Whiplash141
- 3D Ship projection by Georgik
- Floor plan Script by Alysius
- Automatic Door Close by Mexican Dave
I have left a few spare timers and program blocks, if need be.

A note regarding Performance:
As this model uses quite a few timers and scripts, you may, upon spawning, experience a bit of a hiccup and slowdown until everything has loaded up properly. This'll take about 10-15 seconds. After that it should run smoothly again.