Store Page
XCOM 2>  Workshop > krj12's Workshop
This item has been removed from the community because it violates Steam Community & Content Guidelines. It is only visible to you. If you believe your item has been removed by mistake, please contact Steam Support.
This item is incompatible with XCOM 2. Please see the instructions page for reasons why this item might not work within XCOM 2.
Current visibility: Hidden
This item will only be visible to you, admins, and anyone marked as a creator.
Current visibility: Friends-only
This item will only be visible in searches to you, your friends, and admins. 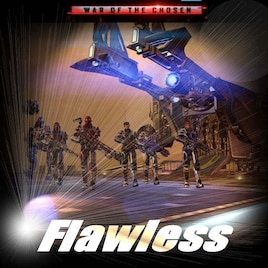 krj12
Offline
See all 5298 collections (some may be hidden)

This item has been added to your Subscriptions. Some games will require you to relaunch them before the item will be downloaded.
Description
Original version can be found at:
http://steamcommunity.com/sharedfiles/filedetails/?id=729580495


Currently, if you complete a mission with no fatalities and no damage received, you receive
a Flawless rating ( i.e., a pat on the back for a job well done).

This mod gives the player an additional reward, above and beyond the usual reward for the
mission in the form of Resources, Common Items, and Rare Items.

This mod has also integrated the Achievement System mod logic, and supports a number
of achievements related to completing a mission with a flawless rating.

CONFIGURABLE LOOT TABLES
You can change the values in
Steam\SteamApps\workshop\content\268500\1127174933\Config\XcomFlawless.ini.

ResourceLootTable - specifies a list of resources you can receive.

There must be at least one item in the list. No spaces allowed.
The sequence numbers must be continuous from 0 to the max index.


ItemLootTable - specifies a list of common items you can receive.


RareItemLootTable - specifies a list of rare items you can receive.

ChanceForItemLoot- specifies the percentage chance
of getting an item reward. Default 20.

ChanceForRareItemLoot- specifies the percentage chance
of getting a rare item reward. Default 5.

Adding an Item to the Loot Table
Most template names can be found in
Steam\SteamApps\common\XCOM 2\Development\SrcOrig\XComGame\Classes
in files beginning with "X2ItemDefault". I make no guarantees
that all templates will work, so modify at your own risk.
Templates from other mods will *probably* work, but again
try at your own risk.

NOTE: Do not completely remove any of the loot tables or ...
"Bad Things May Happen" (tm). The code will not correctly handle
missing lists, it needs at least 1 item present.

To completely turn off item rewards, you will need to set both
ChanceForItemLoot and ChanceForRareItemLoot to zero.

ACHIEVEMENTS
This mod has been changed to support Achievements. To enable
achievements, you will need to download the "Mod Achievement System" at:
http://steamcommunity.com/sharedfiles/filedetails/?id=729577219

This other mod is not required to run Flawless - just to enable
the achievement portion.

NOTE: I have not been able to get the Achievements to work
correctly with an existing campaign. You may need to start a new
campaign. Any issues with achievements will need to be directed
to the author of the Mod Achievement System.

TERROR MISSION REWARDS
This mod now gives a random Rookie as a reward for doing well on a terror mission.
You start out with a 20 percent chance of getting this reward if you save the minimum 6 people.
Every person beyond that adds to your percent chance, all the way up to 100% if you save everyone.
An associated achievement has also been added for when you recieve a Rookie reward.

REWARD MESSAGES
A sequence of reward messages can be found in
Steam\SteamApps\workshop\content\268500\1127174933\Localization\WotcFlawless.int.
They are specified in an array called
RewardVerbiage[x].

Each message has a prefix of the form [IMAGENAME] to specify which image will appear with the message,
see the comments in the WotcFlawless.int localization file for details.

ABILITY POINT REWARD
Set this value to N to turn off the ability point reward.
GiveAbilityPointRewardFlag=Y

Set this value to specify the range of ability points that can be awarded. ( in this case between 2 to 4 points can be awarded )
AbilityPointReward=2,4


IMPORTANT:
Be sure to make a backup of your config file after you make changes.
I anticipate having to make additional changes to either loot
table entries or logic, and republishing will overwrite any changes
you've made.
Credits
Images for the reward messages provided by neIVIesis. Much thanks for his idea on implementing this change
and working on the images.

Dragon32 19 hours ago
@Vullcan
IIRC it's chance to roll on the table.

Dragon32 Apr 23 @ 9:39am
@๖Vσsƙii
But Intel is already one of the rewards you can get for a Flawless mission.

๖Vσsƙii Apr 23 @ 8:48am
Hi is it possible to add Intel Package (POI) along with the rewards? I don't like using More POI as it feels unbalanced

Suggestion: Allow an option to allow flawless ratings even if SPARKs are damaged. They're kind of meant to be tanks, so it seems actually like a good thing if the enemy is shooting at them instead of your guys.

Nemesis Jul 28, 2020 @ 11:43am
Definitely one of the best flavour mods I have ever played with on Xcom2, thank you for the information on how to configure the values as well~!