Store Page
Garry's Mod>  Workshop > Zach88889's Workshop
This item has been removed from the community because it violates Steam Community & Content Guidelines. It is only visible to you. If you believe your item has been removed by mistake, please contact Steam Support.
This item is incompatible with Garry's Mod. Please see the instructions page for reasons why this item might not work within Garry's Mod.
Current visibility: Hidden
This item will only be visible to you, admins, and anyone marked as a creator.
Current visibility: Friends-only
This item will only be visible in searches to you, your friends, and admins. 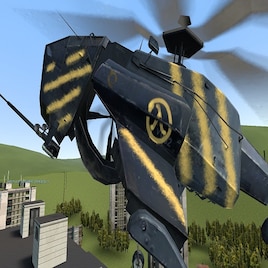 This item has been added to your Subscriptions. Some games will require you to relaunch them before the item will be downloaded.
Description
"Let's even the odds a little!"


Well, I have worked on this for a long time but it is finally here.
DOES NOT RESKIN the HUNTER CHOPPER, it is a SEPERATE NPC.

This Mod Includes :
- 1 Lambda Chopper
- Located in Humans + Resistance Category
- Custom Lambda Texture.
- It is friendly to Rebels, you, Alyx, Barney, Dog, Eli, Kleiner, Magnusson ( Even though we all hate him ), the turrets from the Resistance Turrets Mod, Mossman, and Citizens
- Is hostile to Combine and Combine are hostile to it.
- Is neutral to Hunter Choppers however ( Wanted to make it hostile to them but just didn't. )
- Acts like the Default Hunter Chopper.

Credits :
- Zach88889 :
Scripting the NPC.
- X34X35 :
Supporting me to make the mod.
- The Developer of the Half Life 2 Mod Uncertainty Principles :
The textures for the chopper. And making a
good mod.

Disclaimer :
As of 9/3/17 any mods that I find uploaded to the workshop with my code in it, that I did not give permission to be made, it will be reported and taken down.
Popular Discussions View All (3)

CharmyTheCharizard Aug 4 @ 9:29am
The Rebels probably held them hostage in the backseat.

Vegas Aug 4 @ 1:51am
i shot this helicopter 3 times (because im an a-hole) and a combine guy fell out. illuminati confirmed?