Store Page
Starbound>  Workshop > SomethingRetarded's Workshop
This item has been removed from the community because it violates Steam Community & Content Guidelines. It is only visible to you. If you believe your item has been removed by mistake, please contact Steam Support.
This item is incompatible with Starbound. Please see the instructions page for reasons why this item might not work within Starbound.
Current visibility: Hidden
This item will only be visible to you, admins, and anyone marked as a creator.
Current visibility: Friends-only
This item will only be visible in searches to you, your friends, and admins. 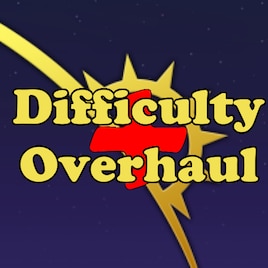 SomethingRetarded
Offline
See all 1350 collections (some may be hidden)

This item has been added to your Subscriptions. Some games will require you to relaunch them before the item will be downloaded.
Description
This an overhaul to both Starbound’s overall difficulty as well as Difficulty+. It takes my favorite parts of Difficulty+ and Difficulty+ Nightmare Edition, their add-ons, and what I learned when making B.Y.O.S Megapack and combines it all into one mod.
Difficulty Overhaul requires a new character (unless you previously made this character with Difficulty+ Nightmare Edition).

What Difficulty Overhaul Is
Difficulty Overhaul is the latest version of Difficulty+, which significantly changes Starbound in the most compatible way possible to make the game harder and more consistent. It doesn’t change difficulty by changing what happens when you die or rather or not you must eat. Instead, the stats of every weapon, piece of armor, monster, and NPC are changed irrelevant if they are from vanilla or a mod. By rebalancing all these stats to make the player relatively weaker in health while on par in damage the game becomes harder while keeping combat fast paced and fun[dwarffortresswiki.org].

Some other features of Difficulty Overhaul include:

Consistent?
In vanilla Starbound, if you have all the right equipment for a tier, combat will be easier in that tier than what it was in the previous tier. From tier to tier, the player’s health, damage, and defense increase faster than it does for NPCs and fauna. Difficulty Overhaul fixes that.

ICE spirit May 29 @ 8:40am
I'm so sorry, but it seems like the game, especially FU is not made for that amount of damage. It makes the game almost impossible. It's also possible that I just suck at fighting in Starbound

To bad, because thats exactly what i just did

Lakuna Apr 26, 2020 @ 12:53pm
I don't know if this mod is still in active development, but I've noticed an issue where high defense values make me invincible to anything that doesn't ignore armor (i.e. lava and status effects). I've singled out this mod as the issue, although I do have plenty of others installed.

Xaliber Apr 10, 2020 @ 8:46pm
Hey, SomethingRetarded! I'm helping maintain Supper's Combat Overhaul right now, and would love to make your mod compatible with it. I need your help though: to make this mod loads after Supper's.

I only need you to modify your include line in _metadata (like you did with FU):

Could you please do that? It'd help me and many users immensely. Thanks a lot in advance!

Fagio di Fapo Dec 29, 2019 @ 1:52pm
The lack of invulnerability frames makes fire traps and others an instakill. Is that the indended behaviour?