Store Page
Arma 3>  Workshop > Aplion's Workshop
This item has been removed from the community because it violates Steam Community & Content Guidelines. It is only visible to you. If you believe your item has been removed by mistake, please contact Steam Support.
This item is incompatible with Arma 3. Please see the instructions page for reasons why this item might not work within Arma 3.
Current visibility: Hidden
This item will only be visible to you, admins, and anyone marked as a creator.
Current visibility: Friends-only
This item will only be visible in searches to you, your friends, and admins. 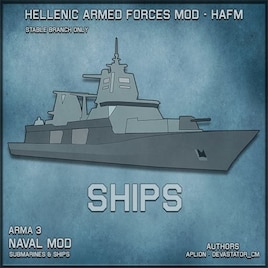 This item has been added to your Subscriptions. Some games will require you to relaunch them before the item will be downloaded.
In 1 collection by Aplion
HAFM NAVY (Ships & Submarines) Collection

4 items
Description
After long period of efforts finally HAFM Naval mod came to a point that I and my friend Devastator_cm dreamed.

Version 2.0 practically is a totally new mod replacing the previous 1.5 version (in case both versions will be used at same time there will be incompatibility issue).

Bringing new ships, weapons, actions and capabilities, as much as possible like in the real life without breaking the game fun was our goal. We believe that we approached it by the best possible way so far.

This mod is coming after the successful Submarines mod, in order to complete another aspect of Naval warfare in ArmA 3.

Ships mod consists by six new Ships plus two from the old mod and are fully workable (not static).

Also a variety of weapons - missiles - torpedoes - cruise missiles - countermeasures, together with defense systems, are included in order to make things more realistic.

So these Ships will also include:

- Active Radar Console (same as submarines but for shorter distances)
- Anti Ship Weapons Console (Torpedoes - CIWS - Missiles)
- Anti Missile Defense Console (CIWS - Missiles)
- Torpedoes Console (for Ships and Submarines)
- Countermeasures for incoming torpedoes (same as Submarines have)
- Cruise Missile Console (for deep strikes)
- Artillery Weapon (Artillery Cannon)
- Boats for leaving/entering the Ships (mainly for missions)
- Helicopter Landing (half-scripted - almost all helicopters can be land - unload cargo into Ship - load cargo from Ship - leave landing deck - etc)
- AI logic (in case ships are controlled solely by AIs, will perform evasive maneuvers and auto-defend or fire against targets)
- TFAR compatibility
- Replenishment Ship, with options to rearm - refuel - repair any same side Ship will be close to it (by the meaning of some minimum distance)
- Flags on ships (user can choose default flag texture or add his own through eden attributes)

Finally, in order to support mission makers and ensure compatibility for missions that have been build using the old mod version, there is an Optional part/addon
which mission makers can use in order to be able to rework their missions in ArmA 3 editor, updating with new ships
(with this addon any old mission can be loaded in editor and old ships will auto-replaced by new ones).

Ofcourse, a detailed operations manual is coming with that mod, explaining the most parts of it as well as a text file with classnames.

Special Thanks to Bohemia Interactive for the ArmA 3 game.


Required addons/mods for either Submarines or Ships:

Helper addon for mission makers for missions made with older version - optional: https://steamcommunity.com/sharedfiles/filedetails/?id=1523395341

Copyright 2018 [Aplion, Devastator_cm] This item is not authorized for re-uploading on Steam, except by its own authors.
Popular Discussions View All (6)

Fats May 18 @ 9:56am
Cant manage to fire anti ship missiles in ships, I tried using the gps guidance, entered de 6 digit coordinates clicked fire but nothing appears to happen. Other weapons like cruise missiles work fine. Am I missing something?

There is a mod called something like Better AI driving, you might want to try. Also, have you tried different formations like column? And have them in Aware or safe while driving.

Dragonlord Tux May 14 @ 11:16am
Don't know if this can ever be remedied but handing control of the ship over to the AI is just an absolute nightmare, especially on modded maps. They just swerve left and right constantly and is never able to keep a straight line. God the AI in this game never fails to impress me.

151 May 9 @ 12:12am
Is it true that only the oto melara gun is able to target aerial contacts and perform direct fire? And it would be great if we could have he-vt shells.

AceFalken Apr 20 @ 8:19pm
Hi, im trying to use this mod and cant seem to get anti ship missiles to work properly and tried to look at the user manual but unfortunately the link to that is dead

IAMspEeDex Apr 16 @ 2:01am
can only the command control everything? all other seats are basically useless for me(talking about the custom weapons/sonar etc)

Hux Apr 4 @ 11:04am
I'm running Zen(enhanced zeus) and I see all ships. Can spawn them with crew or without.