Store Page
Arma 3>  Workshop > Firewill's Workshop
This item has been removed from the community because it violates Steam Community & Content Guidelines. It is only visible to you. If you believe your item has been removed by mistake, please contact Steam Support.
This item is incompatible with Arma 3. Please see the instructions page for reasons why this item might not work within Arma 3.
Current visibility: Hidden
This item will only be visible to you, admins, and anyone marked as a creator.
Current visibility: Friends-only
This item will only be visible in searches to you, your friends, and admins. 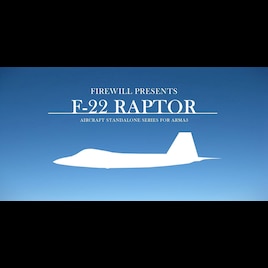 Firewill
Online
See all 2671 collections (some may be hidden)

The Lockheed Martin F-22 Raptor is a fifth-generation, single-seat, twin-engine, all-weather stealth tactical fighter aircraft developed for the United States Air Force (USAF). The result of the USAF's Advanced Tactical Fighter program, the aircraft was designed primarily as an air superiority fighter, but also has ground attack, electronic warfare, and signal intelligence capabilities. The prime contractor, Lockheed Martin, built most of the F-22's airframe and weapons systems and did its final assembly, while Boeing provided the wings, aft fuselage, avionics integration, and training systems.

The aircraft was variously designated F-22 and F/A-22 before it formally entered service in December 2005 as the F-22A. After a protracted development and despite operational issues, the USAF considers the F-22 critical to its tactical air power, and says that the aircraft is unmatched by any known or projected fighter. The Raptor's combination of stealth, aerodynamic performance, and situational awareness gives the aircraft unprecedented air combat capabilities.

The high cost of the aircraft, a lack of clear air-to-air missions due to delays in Russian and Chinese fighter programs, a ban on exports, and development of the more versatile F-35 led to the end of F-22 production. A final procurement tally of 187 operational production aircraft was established in 2009, and the last F-22 was delivered to the USAF in 2012.

input the "Missile Carrier For Rearming" in map. it is can found Empty->FIR objects category.
if f-22 is near missile carrier and zero speed, Open Dialog action is will be activated.
press the action and configure your aircraft whatever you want.
Loadout menu is provide of select the loadout, change the skin, refuel and rearm. also loadout preset is supported.

ECM System is Jamming for Enemy Radar-Based Missile. F-22 have internal, passive electronic countermeasure system so if aircraft keep alive, system is keep working until engine off or crash.
(jamming fail is 10% for gaming balance.)

**Replace the Pilot**
want to replace the pilot from FIR Pilot Crew Pack, just select the type in Combo box attribute in F-22

John Spartan & saul - allow for use afterburner , Ejection Script.
(Specially, John Spartan was help for my SEAD System. Thank you!)


your support is can be make keep working more!
Patreon[www.patreon.com]
Paypal[www.paypal.com]
Popular Discussions View All (2)

The raptor taking dmg on take off.
justy
< >
177 Comments

lamborgh323 Jul 18 @ 10:36pm
Hi, I am really enjoying your mods and your works are fascinating and wonderful!
I just have a little question, on my Arma 3, this F-22 has some decals? or some marks on plane, but on your screenshot, it doesn't have it.

The third screenshot does not have any marks but I have things like the last screenshot. How can I have a clean model like third and second screenshot?

Jackie_boi Jun 30 @ 1:14am
@Nordic Warrior the vanilla AAF jet is the Gripen

Spectre Jun 1 @ 10:14am
Firewill, can you decrease agility a bit to prevent situations when f-22 explodes on start or landing gear brokes? (+to make it easier to fly and yes I know that raptor is a VERY agile jet fighter but it can do very unreal maneuvers, for ex. Um some weird spinning).