Greenlight > Games > Sinister Design's Workshop
Greenlight is being retired. For more information on how to submit games to steam, refer to this blog post.
This item has been removed from the community because it violates Steam Community & Content Guidelines. It is only visible to you. If you believe your item has been removed by mistake, please contact Steam Support.
This item is incompatible with Greenlight. Please see the instructions page for reasons why this item might not work within Greenlight.
Current visibility: Hidden
This item will only be visible to you, admins, and anyone marked as a creator.
Current visibility: Friends-only
This item will only be visible in searches to you, your friends, and admins.
Telepath Tactics
Description Discussions1 Announcements9 Comments390 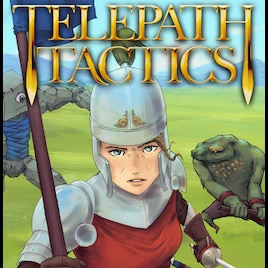 View Telepath Tactics in the store

Hey guys! I've done some scouting, and it turns out that mid-April is the place to be as far as game releases go. I've explained my reasoning here[sinisterdesign.net]. In the meantime, mark April 16, 2015 on your calendars--that's the day Telepath Tactics drops! :)

Hello, tactics fans! I've posted a new update[sinisterdesign.net] about the game. We're coming up fast on the release date; there's only a little more than a month left to go. I'll be sending out press copies soon, then--assuming nothing goes horribly wrong--releasing Telepath Tactics in mid-March.

Read More
Description
Release date: April 16, 2015
IT'S OUT! COME VISIT THE GAME'S PAGE!
Telepath Tactics is a turn-based tactical RPG set in a fantasy steampunk universe. In the grand tradition of Fire Emblem, Final Fantasy Tactics, and Disgaea, Telepath Tactics gives you an ever-expanding army of unique characters as you battle nefarious shadowling slavers. Battles feature destructible battlefields, environmental hazards you can shove enemies into, elevation effects, support for up to 6 armies on the field at once, and the ability to build bridges and barricades.

Telepath Tactics will contain a single player campaign, a 2-to-6 player local multiplayer mode, extensive mod support, and a robust map editor for creating your own battles and campaigns; it is being developed for Windows, Mac and Linux.

Telepath Tactics takes place in a fantasy-steampunk universe that averts most of the tropes you're used to from these sorts of games. Magic doesn't exist: instead, there is psionics and steam-powered technology reliant on a volatile, crystalline substance called vibra. Cavaliers don't ride horses: they ride giant, armored praying mantises. There are no elves, no dwarves, no goblins, no dragons: it's just humans and a few other, entirely original sentient races (such as the shadowlings, disembodied floating heads that quite literally feed on human suffering).

Telepath Tactics takes a highly deterministic approach to combat mechanics. Attack damage is 100% predictable, and attacks always hit unless there is some intervening factor (such as the attacker having been blinded, or the target having some special defensive status effect). In this regard, it is very much a game of skill akin to chess—chance will seldom determine the outcome of a battle.

Telepath Tactics borrows liberally from the best tactics games around to provide a wide variety of available strategies. Throw enemies off of cliffs; push enemies into water or lava; fling friends across gaps; set your enemies on fire; freeze them; blind them; cripple them; stun them; use hit-and-run tactics with cavalry and bowmen; teleport; grab item drops; stick your ranged units on the high ground to boost their effectiveness; the list goes on and on.

Telepath Tactics also brings fresh new environmental manipulation mechanics to the table. Push boulders, barrels and tables in the way to block off certain routes; build bridges to create new routes across water or lava; build barricades to brunt an incoming attack; destroy walls, doors and bridges to open up or close off routes of attack; shoot through open windows; place down explosive charges to create a trap for an unwary opponent. Telepath Tactics supports all of this and more.

The game also comes with a full-featured map editor to make creating new battles fast and simple. Create your own, or download someone else's: Telepath Tactics supports all of the above.
Popular Discussions View All (1)

5ilvara 💫 Apr 25, 2015 @ 5:04pm
You should update the status of the project or those interested since the Greenlight will not know that they can buy it now.

Bladelaw Mar 7, 2015 @ 4:16pm
Tried this at PAX East. I'm sold on the mod ability and the included Map editor. I'm not much of a designer but I hope a community springs up to bring a bunch of quality maps to extend the single player experience.

Recent playtests suggest that the main campaign will take most players about 40 hours to complete, though I think it could be done in as few as 20 if you know the game's systems well and you're very good.

Moonleaf Feb 12, 2015 @ 2:39pm
when it comes out from earlyaccess? I just waiting that. because i looking for *long* campaign of games like this. just campaign of this version is long enough?

Prisedecarrelage Jan 15, 2015 @ 4:16am
Ho nice, thanks ! Charaters don't auto die anymore, but there is a new bug, and i posted explaination and log on forum. Have a good day

If you encounter a bug, the best thing you can do is nab the log file from Documents > My Games > Telepath Tactics > Logs (the filename should show the date and time when the bug occurred). Then post the log with a description of the bug on the bug report forum: http://sinisterdesign.net/forum/index.php?board=37.0

Telepath Tactics has been Greenlit and is now listed in the Steam store. For the latest information, purchase options, and discussions for Telepath Tactics, please see it on the Steam Store or in the Steam Community.
Visit Store Page
For more details Visit Community Hub
For latest discussions
If you really, really want to, you can continue to the Greenlight page. Information on this page may be out of date, since all the action has moved to the areas noted above.