Store Page
ARK: Survival Evolved>  Workshop > We are Captains of the Sky's Workshop
This item has been removed from the community because it violates Steam Community & Content Guidelines. It is only visible to you. If you believe your item has been removed by mistake, please contact Steam Support.
This item is incompatible with ARK: Survival Evolved. Please see the instructions page for reasons why this item might not work within ARK: Survival Evolved.
Current visibility: Hidden
This item will only be visible to you, admins, and anyone marked as a creator.
Current visibility: Friends-only
This item will only be visible in searches to you, your friends, and admins. 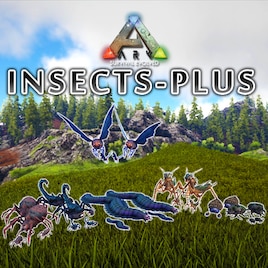 This item has been added to your Subscriptions. Some games will require you to relaunch them before the item will be downloaded.
In 1 collection by We are Captains of the Sky
Ark+

47 items
Description
Notice: This mod is now discontinued until further notice. I feel that some of the largest features have now been implemented directly by Wildcard (namely the insect breeding) so for the future this mod will likely not have any further updates. Thank you to everyone for your kind words and support up until this point, I hope I'll get around to making a new mod in the future that adds more meaningful content to Ark.

NEW!:
- Reduced Scorpion Tail Sting's Torpidity: Max Torpor Amount is now 200 (Was 300, Vanilla is 100), Melee Damage Multiplier is now 4 (Was 5, Vanilla is 3) and have changed the Torpor's build-up duration to match Vanilla (10 seconds)
- Disabled Fall Damage for Karkinos
- Keen Eye: Now has a crosshair when throwing creatures (hold C) or when jumping (hold Space)!
- Disabled Wild Karkinos Aggro to untamed fish
- Shoulder Pet: Meganerua can now be shoulder mounted by players!
- Onycs can now be tamed with Blood Packs which are now their most effective food!

Comment pictures/videos of your raised babies/adults and I'll feature them up here on the page!

New Resources & General Features
- New resources: Venom and Anti-Venom which are produced by the creatures and can be used as substitutes for Narcotics & Stimulants!
- All Insects, Diplopods, Gastropods & Arachnids can now breed and are guaranteed twins, with a 50% chance of triplets!
- All Arthropods (except Karkinos) & Achatina are now twice as likely to develop mutations and can have up to twice as many total mutations as other creatures!
- New unique abilities and attacks for all creatures included!
- Breedable Achatina, Araneo, Dung Beetles, Mantis, Pulmonoscorpius, Lymantria, Karkinos, Onyc, Coelacanth, Sabertooth Salmon, Piranha, Trilobite & Aberrant Versions!
- Tameable & Breedable Jug Bugs, Eurypterids, Leeches, Lampreys, Ammonites, Cnidaria & Meganeura

Plus: Several brand new creatures with unique life-cycles and uses!

Thank you so much to the Ark Modding Discord, they've been a massive help and I can't understate enough what a wealth of knowledge is in that chat. If you're an aspiring modder and want to get involved, come check it out![discord.gg] Especially big thanks to [Biggums[/b] for helping me get the functionality for the Dung Beetles working in my mod and helping me really get to grips with the Graph Editor!
Popular Discussions View All (19)

PINNED: What do you want me to work on next?
We are Captains of the Sky

BugBeam Dec 16, 2021 @ 5:08pm
Spiders and scorpions are arachnids and snails are molluscs.
However, they are all invertebrates.

HC_Warriorplayer Sep 15, 2021 @ 12:26am
@Serb the bees are the only thing missing for me in those mods though you still get amazing quality, plenty of content and in their discords you can even see the progress :)

HC_Warriorplayer Sep 14, 2021 @ 1:55am
@Serb look into the mod No Untameables, the mod athor is doing a great job with that, making untameable creatures tameable and giving them useful abilities, some even habe unique taming mechanics :)

Serb Sep 13, 2021 @ 3:34pm
such a shame its dead, by far my fav mod, and now that its done never gonna see teameable creatures that were left out of the insect update like ammonite/Jug Bug/etc again

HC_Warriorplayer Jun 23, 2021 @ 1:02am
@yaboiaj Kraken's Better Dinos allows that too, I recommend you that mod