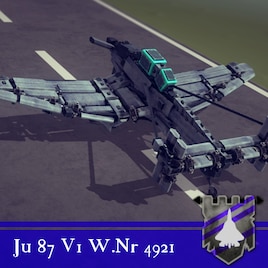 66 items
Description
Ju 87 V1 W.Nr.c 4921 is the earliest prototype of Ju87 Stuka without less non-essential parts. It was the first prototype that took off.

The Ju 87 V1 distinct feature was its twin tail, but it was removed after crashed on 24 January 1936 and changed to a single vertical stabilizer tail design. To withstand strong forces during a dive, heavy plating was fitted, along with brackets riveted to the frame and longeron, to the fuselage. Other early additions included the installation of hydraulic dive brakes that were fitted under the leading edge and could rotate 90°.

I'm not proud of this release, compared to the other Stuka. It was too small for my usual comfortable size, so it looks extra blocky. But the others convinced me to release it anyway so here it is.

Ross P. Aug 23, 2017 @ 11:21pm
The pitching is very responsive, great for loops! It's also pretty durable, withstanding my rough first attempt at a landing without any damage. I'm not sure about the choice of rear landing gear though. I'd have to do some experiments to make sure, but I think the angled caster is causing it to veer to one side or the other when taking off. Still a cool plane though!