Store Page
ARK: Survival Evolved>  Workshop > hogscraper's Workshop
This item has been removed from the community because it violates Steam Community & Content Guidelines. It is only visible to you. If you believe your item has been removed by mistake, please contact Steam Support.
This item is incompatible with ARK: Survival Evolved. Please see the instructions page for reasons why this item might not work within ARK: Survival Evolved.
Current visibility: Hidden
This item will only be visible to you, admins, and anyone marked as a creator.
Current visibility: Friends-only
This item will only be visible in searches to you, your friends, and admins. 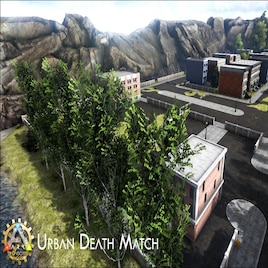 hogscraper
Offline
See all 81 collections (some may be hidden)

This item has been added to your Subscriptions. Some games will require you to relaunch them before the item will be downloaded.
Description
Mod ID: 1107180668

Upcoming and Past Patch Notes

This mod is currently being developed and is a map extension for The Island. It adds multiple areas outside of the map's South-Eastern bounds and requires a player with admin ability to set up features like Team Death Match. This mod is stable enough for testing but there are going to be glitches. All items I am creating for this mod can be placed anywhere, including outside the level bounds, but they can only be spawned by admins.

In order to setup TDM, an admin will need to spawn and place the six items at the bottom of this description and will need to guide the match start and outcome:

The Control Panel
Arena Entrances 1-4 (Need a minimum of two different ones to start, can be any team)
Arena Exit Pad (Optional)

TDM is designed for a maximum of four teams of six players. While I test this functionality I am open to other arrangements and this number can change.

Each spawn area, as well as the center of town next to the store, has an Arena Exit Pillar. Interacting with this item will allow a player to be removed from their current team and they will be teleported to the default exit location as indicated in the Control Panel. The default location is on the southern shore of the South-Eastern-most island of the main map.

The Control Panel also has other functions that can used to tailor your events and they are covered in another stickied thread here in the discussions.

All wild dinos left in the arena will be destroyed on server restart. Tamed dinos are ignored.

Medium sized urban location added to The Island as a map extension. This allows for no conflicts with other mods or game modes.

Ark placeables can be placed in the arena and I have added in a valley to the new arena. This allows travel to the location on foot. It is blocked off but the debris can be removed via Control Panel.

Team Death Match mode that uses admin placed pieces to ensure no conflicts with other workshop items that change server values or modify in game content.

Scavenger Mode spawns lootable items around the arena, adds a chance for loot in certain storage containers and spawns dinos in the arena as well. Currently only difficulty level 1 is enabled.

All trees in this new area can be harvested for wood. All bushes but one type have been modified to allow harvesting of berries.

Commodities exchange - Turn your excess trade goods in for tokens that can be spent on weapons, armor, ammo or consumables. Tokens are also awarded for dino kills in the arena and for human kills during Death Match events.

Survival Mode - Head to the warehouse for a fight to the death! Earn tokens by killing dinos and exchange them for weapons, armor and ammo at the stores! Each round has a sixty second down time and the number of dino spawns increase each round.

Custom Arena Death Match - 4 unique columns that can be placed anywhere in the world. Placing them in order, 1,2,3 then 4 builds unpassable barriers and seals that area off while also building a large structure in the center of the area. Please follow the below link for Control Pane;/General Mod Usage for more information!

Still working on aligning some of the house pieces and foliage. Please report anything you find that looks off in the Feedback/Suggestions thread.

More game modes for use in the Arena.

Stickied Posts:
How to use the Control Panel/General Mod Usage

How to set up optional Ini Values for the mod

ATTENTION USERS!
This is a map extension with added functionality. Because the landscape I created was designed to work with The Island you may have issues attempting to run this on any other map. The Custom Arena Death Match will be compatible with all maps after this Sunday's patch.

If you have any other maps you are curious about, please let me know in the comments and I will try to test those out for you.

I have created a Discord channel and would like to invite everyone who has questions or ideas to check it out!
https://discord.gg/mgQWFbg

Egon_Freeman Aug 22, 2019 @ 1:59pm
So... Would you consider making this compatible with Valguero? I know there's a dungeon in there already, but I'd love to have a little bit of a "human city" tucked away somewhere... someplace where I could build stuff, no less!

GamerGirl Aug 15, 2019 @ 6:25pm
OMG this should be its own map so players could actually "live" in the city in the houses and such! This would be so F-ing cool! PVP players could do ark PubG style and PVE players could have a sims meet Ark feel ! Can you just imagine??? <3

hogscraper  [author] Mar 31, 2019 @ 9:29pm
3/31/19 Newest patch is live. Had some issues with the uploads so I will update this with a link to this month's notes when I get home from work tomorrow. Thank you all for your support!

hogscraper  [author] Dec 13, 2018 @ 10:57am
To anyone that has tried finding them, the latest update seems to have messed up the mod description again. I have updated that info! Thank you to everyone!

1. Using reset arena has had some work picking up mistakes when using the Control Panel. If someone had set the default exit location to the Exit Pad or the Team Entrances then Reset Arena it would crash the server if either of those items had been deleted after making that choice or it would choose (0,0,0) as the exit location, (which is the middle of the map in that forest). I made it so that if someone chooses the pad or entrance as the exit point then deletes those items it will fall back to the default exit location, (on the small island to the East of arena's entrance pathway).

hogscraper  [author] Nov 27, 2018 @ 8:26pm
2. When you Reset Arena it is supposed to delete all of the already spawned dinos. I changed that code around and it's doing a much better job deleting them but there seems to be an issue where any sort of server lag is leaving them behind. Nearly all of them are being deleted but I'm still working on why one or two are not. After I made this change I had no issues with them attacking players before and after server reset.

3. Something changed in the parent used to create the park benches so I went through the code and made adjustments so that they are functioning properly. Seating and unboarding are working correctly during testing.

hogscraper  [author] Nov 27, 2018 @ 8:26pm
4. I haven't been able to replicate this issue. Are you using any sort of admin program that might be loading an ini on top of everything else? I do know that the game seems to update these files every time it runs but I can't seem to replicate it not loading on my end.

The changes I've made will be released with this month's patch. Even if you're no longer using the mod, thank you very much for reporting those errors! Everything I can get that makes the mod run better is appreciated!
< >