Store Page
Tabletop Simulator >  Workshop > Xveers's Workshop
This item has been removed from the community because it violates Steam Community & Content Guidelines. It is only visible to you. If you believe your item has been removed by mistake, please contact Steam Support.
This item is incompatible with Tabletop Simulator. Please see the instructions page for reasons why this item might not work within Tabletop Simulator.
Current visibility: Hidden
This item will only be visible to you, admins, and anyone marked as a creator.
Current visibility: Friends-only
This item will only be visible in searches to you, your friends, and admins. 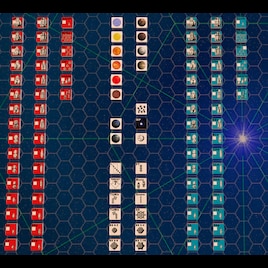 Xveers
Online
See the collection (may be hidden)

This item has been added to your Subscriptions. Some games will require you to relaunch them before the item will be downloaded.
Description
This was uploaded to give everyone a nice selection of chits to play space combat games. You have a full selection of ships from Escort up to Superdreadnought and beyond, in two seperate colours. Each class also has an Advanced version if you wish to use it. Also inculded are a few chits to mark asteroids, planets, and stationary bases.


This was created using chits from Starfire 4th Edition ( http://www.starfiredesign.com/ ).
Quickstart rules for the most recent version of Starfire can be found at http://www.wargamevault.com/product/213075/Quick-Start-Rules.

Thanks to Krenshala for providing an improved hex map for improved readability!

Version 1.2
- Fixed board to load from cloud

These look amazing by the way, really nice capture of the chits.

Xveers  [author] Aug 8, 2017 @ 12:13am
Hello Praetor!
Damn, that would do it alright. I had no idea that the upload wouldn't even manage to do THAT right. I would have thought the upload process would have actually done that. I mean, one would assume that uploading the mod would actually upload some of the key parts OF the mod, right?
Figures. There's a bunch of little things that bug me about Tabletop, and I guess that gets to be added to the list.

Anyhow, that's defiently a fixable thing at least! I'll get that done tomorrow. I'll have to redo all the links and upload them.


i think it cant find the textures, best guess ive got as to the problem is that maybe when the textures were selected you might have not set them to upload to cloud?, But thats just a random guess.


i'd greatly appreciate it if this was fixed, i love things like this.
< >