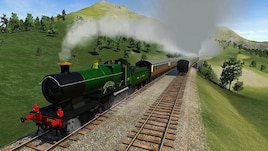 JK
Offline
See all 194 collections (some may be hidden)

This item has been added to your Subscriptions. Some games will require you to relaunch them before the item will be downloaded.
Description
GWR 4-4-0 3700 'City'.
Available: 1902-1927.

GWR 4-4-0 3700 'City' class. Designed for express passenger trains, 20 were built between 1902 and 1909, with all being withdrawn by May 1931. In 1904 City of Truro achieved a speed of 100mph, although it was not an officially authenticated record, like that achieved by Flying Scotsman in 1934. In light of its famed speed and as the 2000th locomotive built at Swindon, when it was retried in 1931, it was donated to the LNER and displayed in their museum in York. It has been preserved in working order to this day.

GWR Toplight coaches to match the top speed of the engine:
http://steamcommunity.com/sharedfiles/filedetails/?id=971564183

Track to support the top speed of the engine is recommended:
http://steamcommunity.com/sharedfiles/filedetails/?id=1101681375

Bocaan Aug 8, 2017 @ 2:50am
ok man im going to make a GWR DLC Mod with your stuff pal hope your ok with it im going to remake the GWR map with all your GWR stuff but again thats up to you....... i havent talked much as real life has gotten hellish (its the birthday season my family is fracking huge man! from july to september there is literally 20-25 birthdays lol)

afallentree Aug 7, 2017 @ 8:41am
Excellent work JK. as a big GWR fan (along with southern bullieds) I patiently await your next GWR mod.