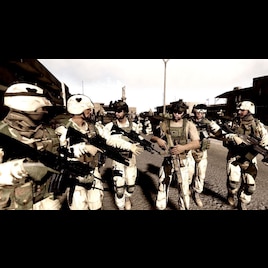 Features:
- Units, primarily US Army and USMC, from 2001 to 2007, wearing appropriate uniforms and gear for each year
- units are mostly available in woodland and desert variants (except for later US Army, wearing universal camo pattern, of course)
- Specific US Army Units, including 101AB and their regiments, 3ID, 25 and 2IDs, all wearing their proper uniforms and unique helmets, found in "Groups" section in editor or zeus. (their helmets are hidden from the arsenal to avoid intense clutter)
- Generic Special Forces Units, from 2001s to 2005 era
- Adapter for users of RH Accessories pack is available, inside the "optionale" folder found in the mod's directory (@simc_uaf_08_rhs).
using RH Optics will give more period accurate attachments not found in RHS, primarily PEQ2s and Aimpoint M2s, also TA01 ACOGs

-----
Do not attempt to monetize this addon! I did not get paid to make this so neither will and/or should anyone get some money from this