Store Page
XCOM 2>  Workshop > RefinedTurtleFlesh's Workshop
This item has been removed from the community because it violates Steam Community & Content Guidelines. It is only visible to you. If you believe your item has been removed by mistake, please contact Steam Support.
This item is incompatible with XCOM 2. Please see the instructions page for reasons why this item might not work within XCOM 2.
Current visibility: Hidden
This item will only be visible to you, admins, and anyone marked as a creator.
Current visibility: Friends-only
This item will only be visible in searches to you, your friends, and admins. 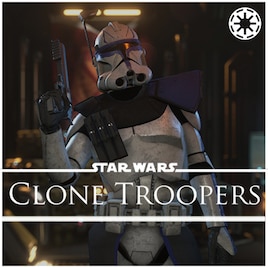 Count Grimhart
Offline
See all 1258 collections (some may be hidden)

Current Vers 2.2.0:
Thank you Tommy-Trials for creating a showcase trailer for this specific steam workshop upload! Be sure to check out his channel.

(10/9/2017) Update 2.1.1:
-Fixed the missing Kama issue with Commander Bly
-Re-added the metal latch on the Kamas
-Added a Kama version for Gree Torso

- Rigging Improvements! (Goodbye Clipping! Or most of it. Hopefully.)
- No more undersuits going through legs
- Updated the Helmet visor, giving them a black glassy look.


Added items:
- Commander Gree Customizations
- Commander Blu Customizations
- Unused Version of the macrobinoculars (Popular Request)
- Added more gear options! Not alot though
- Added 41st Scout Troopers! Massive thanks to Count Grimhart for sitting with me throughout for this one.

For now, Im done with Clones stuff, (Mod size nearing 1GB) I might be back, but don't expect it to be soon.
Im off to either pursue my own personal project or maybe port over something else, we'll see.

Working on a WOTC version at the moment.

The assets used here orignated from the upcoming Battlefront 2 games, All assets belongs to EA and Star Wars is rightfuly owned by Disney. The assets here are for non-commerical uses and Im not earning or accepting a single cent from this mod.

Although I do not have the exact date of when these updates will be lives, I do roughly have a list of what will be coming.

- Female clones (Lite Version)
- Due to the massive amount of work I need to do for the females, im only going to add some customizations and not all of them.

The list could change anytime, its purpose here is to show you what to expect roughly.

Q: Will there ever be a female clones made avaliable?
A: Currently, the answer is no, due to the massive amount of work I have to do for both Male and Female, perhaps when im motivated I'll get on it.


Q: Will you do the commando armor?
A: If I got a dollar for eveytime someone asked me that, I'd have myself 3 up sized McDonald's meal. The simple answer is no, I don't even have the time to update this mod due to life, so please stop asking, I literally see one commando request everyday or two.

Q: What is the planned updates?
A: Check out the creative discussion or any of the pinned thread, my aim is to get as many lore-wise clone in this mod as long as it's within my abilities.

Q: Will this be updated for WOTC?
A: Yes, eventually, but I have alot of things on my plate at the moment.

Q: Can I use this mod to make my own custom clones or pluck one of the assets for my own mods?
A: Generally, I'd like it if you ask me first, or at the very least credit the proper people. But what can I do to stop you?
I'm just a bunch of sentences in a description.

Count GrimHart:
For creating most of the upcoming/already clone textures, I can't stress enough that without him, this mod would be a mucky mess of failures.

EA (Electronic Arts): For creating the Assets
Majora and SpartanMyth: For creating the Respective Clone battlelion texture included in this mod.
Venator: For creating Commander Cody's Assets
CorraAshu: For extracting the Assets for us to use.
Sundownsyndrome: For allowing me to use the model.
Claus: Used his scarf assets, and perhaps more in the future.
Me: Porting and rigging the assets into XCOM 2 to make it useable.

Yuul B. Alwright Mar 6 @ 3:54pm
Finally i can now have the perfect excuse for miss a 85% shot nearly to the enemy

Evil Saga Feb 6 @ 7:39pm
Hi! I got the extra mod indicated here, i have activated all mods in the start screen, but when I am in the Character Pool, I see the pieces listed there but I cannot see them on my character. For example, arm pieces... my arms are invisible now. Am I missing something?

Thorgim_CrotchBearer Sep 19, 2020 @ 8:18am
@(NPC) u need to activate them in the game when when u open it, there should be an option in the start up menu to active them under the workshop section

BringndaHurtte Jul 10, 2020 @ 4:50pm
For some reason i can only get the mod on one character than i cant make it appear on any others did anyone else have this issue?