Greenlight > Games > S4G4N's Workshop
Greenlight is being retired. For more information on how to submit games to steam, refer to this blog post.
This item has been removed from the community because it violates Steam Community & Content Guidelines. It is only visible to you. If you believe your item has been removed by mistake, please contact Steam Support.
This item is incompatible with Greenlight. Please see the instructions page for reasons why this item might not work within Greenlight.
Current visibility: Hidden
This item will only be visible to you, admins, and anyone marked as a creator.
Current visibility: Friends-only
This item will only be visible in searches to you, your friends, and admins.
Toxic Bunny HD
Description Discussions1 Announcements8 Comments292 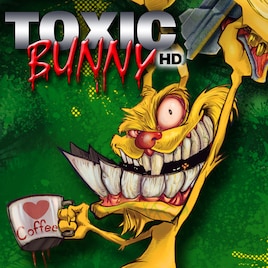 Reaper
Offline
See all 27 collections (some may be hidden)

Store page
Recent Announcements View All (8)
We are GREENLIT
May 28, 2014 - Belshamo

Thanks to all for your support we so thrilled to be green lit. Its going to be hamster launchers for everyone!!!

Hello to all those of you that have shown interest in Toxic Bunny HD. We are pleased to announce that we are on the new Indie Royal Bundle with a bunch of other great games in the greenlight queue.

Check it out and support your indie friends whilte scoring a bunce of awsome games.

Toxic Bunny is what would happen if the Looney Toons & Monty Python were heavily armed and thrown into a blender with the best (and worst) movies of the 90's and turned the results into a retro platform game.

Find out what happens when an almost normal rabbit gets into a really bad mood. Follow Toxic as he tries to find the person responsible for interrupting his coffee break, brainwashing all his friends and covering the planet with decaffeinated goo.

Just some of the things you’ll get up to:


What people are already saying:

Originally posted by Nick:
Hey - that game drank my coffee!

Originally posted by The Society For Hamster Equality:
We demand this game be banned.

Originally posted by Brian:
This game is very silly, I would like to register a complaint.

Ok, ok, here is what professional people are saying:

Originally posted by www.itfgaming.com:
.. this title is highly recommended and will keep you busy for quite a while to come.

Originally posted by www.el33tonline.com:
I would recommend Toxic Bunny HD to any gamer that appreciates high speed action and loads of humour in their games.

theSiege Feb 20, 2019 @ 1:57am
Hello, hoping someone can explain to me as to why we have a store page on steam for this but I'm not able to purchase or add to my library in anyway?
I was pretty excited when I found this and was so ready to purchase, and to my disappointment I can't seem to. Can only add to my wishlist

Belshamo  [author] Jun 19, 2014 @ 7:13am
Hey Snoopster we could get taht picture for you, email us at info@celestial-games.com would be a pleasure.

Reaper  [author] May 19, 2014 @ 11:56pm
Hi The Lunatic25, The game already has gamepad support. You can bind your gamepad buttons in menu->configure->controls

Toxic Bunny HD has been Greenlit and is now listed in the Steam store. For the latest information, purchase options, and discussions for Toxic Bunny HD, please see it on the Steam Store or in the Steam Community.
Visit Store Page
For more details Visit Community Hub
For latest discussions
If you really, really want to, you can continue to the Greenlight page. Information on this page may be out of date, since all the action has moved to the areas noted above.