Greenlight > Games > sɹɐʎA xɘlA's Workshop
Greenlight is being retired. For more information on how to submit games to steam, refer to this blog post.
This item has been removed from the community because it violates Steam Community & Content Guidelines. It is only visible to you. If you believe your item has been removed by mistake, please contact Steam Support.
This item is incompatible with Greenlight. Please see the instructions page for reasons why this item might not work within Greenlight.
Current visibility: Hidden
This item will only be visible to you, admins, and anyone marked as a creator.
Current visibility: Friends-only
This item will only be visible in searches to you, your friends, and admins.
Zigfrak
Description Discussions3 Announcements19 Comments293 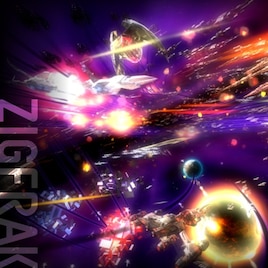 Rusty Sniper
Offline
See all 42 collections (some may be hidden)

View Zigfrak in the store

We're launching on Steam tomorrow! Activation codes will be making their way to distributors shortly afterwards. To check on code status for whichever distributor you purchased Zigfrak at, please see this handy dashboard:

Thanks once again for helping us get on Steam!

Just a quick update on our Steam progress -- we're preparing the storefront, and working on a first pass at Steamworks integration. Significantly, Zigfrak's save system is being re-tooled to play nicely with Steam Cloud. We're tentatively shooting for a launch in December, and will keep you posted.

If there are any Steamworks features that you would like to see supported by Zigfrak, please chime in!

News regarding keys will be made available when the release is looking more concrete.

Read More
Description
Release date: November 2012
We're Greenlit! Thanks to everyone who made it happen.
Zigfrak is a space-based action RPG, featuring missions, exploration, and crafting. With an emphasis on loot and over-the-top items, it's not a traditional space sim. Enemy ships explode like loot piñatas, spewing forth useful pickups.

The game employs subtle humor to poke light at a dark situation -- a human civil war on a galactic scale, complicated by the invasion of technologically superior aliens. During the campaign, players encounter clues and artifacts which could reveal ancient secrets of humanity.

Zigfrak is available for PC, Mac, and Linux at http://zigfrak.com/
Popular Discussions View All (3)

Any update coming up? :D
Anti-Fun

Zigfrak has been Greenlit and is now listed in the Steam store. For the latest information, purchase options, and discussions for Zigfrak, please see it on the Steam Store or in the Steam Community.
Visit Store Page
For more details Visit Community Hub
For latest discussions
If you really, really want to, you can continue to the Greenlight page. Information on this page may be out of date, since all the action has moved to the areas noted above.