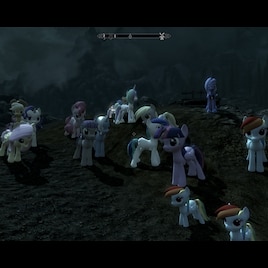 Sekai
Offline
See all 249 collections (some may be hidden)

This item has been added to your Subscriptions. Some games will require you to relaunch them before the item will be downloaded.
Description
**Alternate models with facegen data are available, but only on Nexus as it comes as an addon that requires Crimes Against Nature.

Due to issues with Steam and Creation Kit, this mod can no longer be updated properly from this page. Go here for the newest version, unsubscribe from this page and subscribe to the new page:

Or get it from the Nexus:

This mod has also been converted for Skyrim SE, though it currently has some stuff (polymorphs, Spike, pony dragon summons) not working properly.


***Pony race is NOT available in the character creation menu, it is accessed by polymorph spells located in a chest the Bannered Mare in Whiterun, across from the main entrance and up the ladder.

The latest update to this mod replaces most of the .wav files with .fuz files, which are much smaller, and the entire mod is now under 100mb, so the extra voice pack should no longer be necessary. However, if the sound does not work, you can still get the .wavs from Nexus. Version 5.6.1 (not the current version, which also has .fuz) has them, find it in the optional files. I'll leave the extra sound pack up for now on Steam in case this doesn't work.

CASTING SPELLS (except lesser powers) WHILE TRANSFORMED WILL NOT WORK AND WILL CRASH THE GAME.

This mod was originally an upgraded version of the existing pony horse mod by zdzichorowerzysta and demon pony Shadowmere mod by whalecakes, fixing the crash to desktop issue, adding unique pony mounts, conjuration spells to summon them, perks to enable multiple summons at once. Now includes voice packs for all of them and flying pony (dragon) summons, and allows you to be a pony by means of polymorph spells (located in the Bannered Mare in Whiterun, across and up the stairs from the main entrance) without losing all of the functionality that you do as a vampire or werewolf. Also adds two difficult high level encounters with their own spell drops

5/21/16: Added Sunset Shimmer and Moondancer summon and mount (near Whiterun)

12/22/14: Added Trixie and Maud companions/polymorphs/summons/mounts, Vinyl mount, removed all abilities from mounts (I had them before companions were part of the mod, between having the companions and some complaints that they were OP, it's no longer necessary) returned dragon default speed to normal, Spike will need an optional file from Nexus to move fast again (which will make all dragons move very fast while on the ground). All new mounts are at Whiterun stables.

There are still limitations while transformed; cannot cast normal spells, sneak, use bows (at least, you can't fire them), and some other things, but you can do far more than as a werewolf or vampire..

All companions all can be found across the bridge north of Riverwood. They are stronger than the summons. They can wear armor, and giving them unarmed damage enchanted gear will increase their melee damage. Applejack does not have spell procs but hits harder and has more hp than the rest. Most horse audio has been disabled or replaced to prevent Pinkie from making excess Sega noises.

Mounts can be found at the various city stables. Rainbow Dash is at the base of Mt. Hrothgar, Celestia and Luna are up Mt. Hrothgar, right outside the Greybeard castle.

Rideable flying dragon pony mod is now up, details and download are on Nexus as Steam doesn't allow add-on files and it requires Dragonborn DLC.
http://skyrim.nexusmods.com/mods/26677

Casting normal spells while transformed does not currently work. Downloading SkyTweak and its hotkey casting optional mod linked below will work, though it will require SkyUI and SKSE, as well as manually rebinding each spell to the key you want.
http://skyrim.nexusmods.com/mods/33395/

*REQUIRES MOST RECENT VERSION OF SKYRIM, does not require Dawnguard or Dragonborn.


There are two high level boss encounters. Pinkamena is at Hanvar's Rest (north of Dustman's Cairn). Nightmare Moon is far south of Windhelm.

Ponies/custom models from mods in general may be invisible for some people (not counting the two invisible horses in the opening sequence, that is a bug specific to this mod), it is usually a conflict with the texture settings, there are several things that can cause it but first try this quick fix in skyrim.ini:
https://www.youtube.com/watch?v=0VTZKKTBjpc

____
There are several unique persistent ponies with special abilities in the game, which have been flagged essential and cannot die (they can still be knocked out temporarily like followers, though). They are 50% the size of the original models. Summoned versions are 25% size. They can be found at the stables throughout Skyrim and along the path up Mt. Hrothgar.

All of their spells are cast-on-hit and will go off only on a melee attack, as I have not yet learned how to make nonhumans cast normally.
____

INSTALLATION:
Just subscribe to the mod in Steam. If downloading from Nexus, use Nexus Mod Manager or unzip into Skyrim directory.


Prior to editing/making this mod, I had no experiencing modding at all and very little with messing with textures and meshes, so if there's some bug or issue with it or something I may have missed, let me know and I'll see if I can fix it.

V4+ of this mod uses a modified version of the script in Jared Bangerter's guide to making shapeshifting spells
http://jaredbangerter.hubpages.com/hub/How-to-Create-New-Shape-Shifting-Spells-In-Skyrim

Characters and many sounds from MLP:FIM

The Oneiroratherix Jan 3 @ 11:01am
Time to kill every horse in Skyrim!

Sekai  [author] Nov 1, 2017 @ 7:17pm
Never tried it but they shouldn't be immune. As far as I can find it's a specific immunity flag, and I don't think Dragonborn was even out when I added them.