Store Page
Serious Sam 3: BFE >  Workshop > Finzy's Workshop
This item has been removed from the community because it violates Steam Community & Content Guidelines. It is only visible to you. If you believe your item has been removed by mistake, please contact Steam Support.
This item is incompatible with Serious Sam 3: BFE. Please see the instructions page for reasons why this item might not work within Serious Sam 3: BFE.
Current visibility: Hidden
This item will only be visible to you, admins, and anyone marked as a creator.
Current visibility: Friends-only
This item will only be visible in searches to you, your friends, and admins. 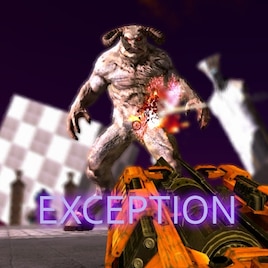 Finzy
Offline
See all 106 collections (some may be hidden)

This item has been added to your Subscriptions. Some games will require you to relaunch them before the item will be downloaded.
Description
THE FOLLOWING RESOURCES ARE NEEDED FOR THIS TO WORK!:

Serious Sam 2 Sounds Resource Pack[www.dropbox.com]
(Extract this .gro file to Content/SeriousSam3. The original SS2 sounds pack is no longer on workshop so you'll have to get it this way.)

There is a demo of the complete version available! (It's also updated with most up to date stuff, including an ending boss fight):
http://steamcommunity.com/sharedfiles/filedetails/?id=946984611


Enter the mind of Serious Sam himself in this exceptional mappack inspired by
Inception and Psychonauts!

Mental has hacked into Netricsa using technology to manipulate a person's dreams, trapping Sam inside his own mind and militarizing his mind against himself. To wake up, Sam must perform an Exception, and fix Netricsa by convincing her to get back to her senses.

This near final beta version of the mappack includes four playable levels, Dream Collapses, Madness Begins, The City of the End and The Peak of Insanity, each being set in surrealistic landscapes, either made of checkerboard cubes and various odd geometrical shapes, or a gigantic bathroom with a warzone of soldiers, giant machine guns mounted on carrots, destroyed helicopters and tanks, a burning gigantic cityscape, or a mental apocalypse! All levels are fully playable to completion with the exception of Peak of Insanity, which is still missing a final boss fight and some additions.

Recommended to be played on Normal difficulty unless you're an experienced Sam player.

Recently updated with a small bugfix update with following changes:

- Added subtitles for Dream Collapses and Madness Begins (for most things, anyway)
- Fixed players not being teleported after the intro cutscene in Dream Collapses
- Fixed some jump skips in Madness Begins
- Added new Sam voicelines for City of the End.
- Hotfix no longer needed.

- Added 2 new levels, The City of the End and The Peak of Insanity
- Added a new introduction scene to Dream Collapses
- Added a new unlockable credits level
- Added new player models for characters that are featured throughout the levels
- Added transitions between certain levels.
- Fixed a bug in Madness Begins where enemies would remain alive at the bottom of the room (added an abyss killer).

STUFF STILL MISSING FROM THIS RELEASE:

- A final battle
- Some tweaks and bugfixes to the latter 2 levels - they are effectively in beta
- Subtitles for Dream Collapses and Madness Begins (will be added for the final release).
- Updated Sephiroth model (still uses the old one but probably replaced by SFL's "Sexyroth").
- Additional multiplayer enemies (if playing in co-op, using higher enemy strenght settings is recommended)

Old players: If you downloaded any previous betas of Exception from outside the Workshop, please delete them before installing this one!

First map on coop, I teleport to the next area in the beginning, my freind doesnt.
blourt
< >
128 Comments

Finzy  [author] Sep 30, 2016 @ 9:00am
That'd be a lot to list for now, have you tried looking at the credits? I'll see if I can post a list someplace later. Also, I'm finally working on giving this a fully finished update now (with a new level and additions)!

DaoSt-e-a-M Sep 30, 2016 @ 5:11am
I'm trying to find the ambient soundtrack of the levels, but found just one. Maybe you can help with the names of the soundtrack? Pleace!!! They are so cool.