Store Page
Portal 2>  Workshop > Tanzeel Kazi's Workshop
This item has been removed from the community because it violates Steam Community & Content Guidelines. It is only visible to you. If you believe your item has been removed by mistake, please contact Steam Support.
This item is incompatible with Portal 2. Please see the instructions page for reasons why this item might not work within Portal 2.
Current visibility: Hidden
This item will only be visible to you, admins, and anyone marked as a creator.
Current visibility: Friends-only
This item will only be visible in searches to you, your friends, and admins. 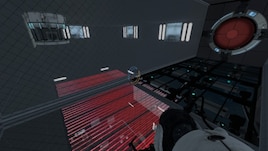 Tanzeel Kazi
Offline
See the collection (may be hidden)

This item has been added to your Subscriptions. Some games will require you to relaunch them before the item will be downloaded.
Description
Take a leap of faithplate! :)

If you feel stuck at some point, this map has hint overlays (small square flat white thingies) on the floors and walls placed at strategic points across the map. Use them and look up and around. You will find them helpful.

This is my 2nd map which started as a PeTI map but the way I intended this map to be played meant I had to use hammer. This map is a mix of PeTI & Hammer and hence there are some weird artefacts hidden away in the map.


@chimera201 Thanks for trying to help me out with the custom elevator videos.

Revision 3 [15-Nov-2012 @ 10:46pm]:
- Fixed the issue with the laser in the second room. Earlier the laser
remained off after player respawn rendering the puzzle unsolvable. This does
not happen now.

- Built map in both HDR and LDR. The map appears brighter in HDR mode.

- Added cubemaps at a few spots in the large rooms.


Revision 2 [13-Nov-2012 @ 11:12am]:
- Fixed possible glitch in second room by using floor button instead of the
pedestal one. Also created some player clips which should prevent the player
from moving around too much and spoiling the near-death surprise.

- Moved turret "Thank you" trigger closer to the fizzler field. I did this
because some of my friends said they destroyed the turret using portals before
the trigger was activated.