Greenlight > Games > fsaenz's Workshop
Greenlight is being retired. For more information on how to submit games to steam, refer to this blog post.
This item has been removed from the community because it violates Steam Community & Content Guidelines. It is only visible to you. If you believe your item has been removed by mistake, please contact Steam Support.
This item is incompatible with Greenlight. Please see the instructions page for reasons why this item might not work within Greenlight.
Current visibility: Hidden
This item will only be visible to you, admins, and anyone marked as a creator.
Current visibility: Friends-only
This item will only be visible in searches to you, your friends, and admins.
Reversion: A Sci-Fi Adventure Game
Description Discussions6 Announcements13 Comments534 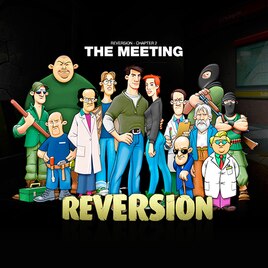 fsaenz
Offline
See all 77 collections (some may be hidden)

View Reversion: A Sci-Fi Adventure Game in the store

We are proud to announce that the first chapter of Reversion is now released on Steam!
http://store.steampowered.com/app/270570/

# Reversion is available in a new deal, this time thanks to IndieGameStand!
Pay what you want and get Reversion 1 and Reversion 2! :)

You wake up in a hospital with no memories... You are in Buenos Aires in year 2035 and the city is under the control of a military organization. Suddenly, you realize that your life is in danger and that you need to escape as soon as possible. What are you going to do?

Reversion is science-fiction Point&Click Adventure Game developed by the indie 3f interactive. Inspired by classics of the genre from Lucas Arts, Sierra or yet Pendulo Studios, 3f interactive thought its game for the fans of old school adventure games.

You will be propelled to a desolate future, robbed of your memories and looking desperately for a clue to understanding your predicament.

Play as Christian and find his way back to his memories, through numerous puzzles and dialogues with intriguing characters. Team up with Victoria, a mysterious girl also held in the hospital, and escape from this hell. Along your way out, discover who you are and what happened before you woke up 20 years later to maybe, change the future…

Plunge yourself in this fascinating adventure and reverse the disastrous events that led the city to ruins.

Take your chance to change the history; it’s time for Reversion.

What platforms is Reversion available on?
Both Reversion Chapter 1 and Chapter 2 are currently available on Windows and Linux.
We are also working on Mac ports for Both chapters.

How Many Chapters are you going to develop?
The game will have 3 Chapters, and the third and last one is under development without a clear release date. We hope it will be finished by early 2014.

I already own the game, will I get it on Steam if you’re Greenlit?
Yes! We are going to give keys for our existing customers at no extra cost.

Search for us in the bottom of the page. Right next to other great games like "The Cat Lady" and "Rambo: Last Blood" :)
Popular Discussions View All (6)

meldme Jul 8, 2014 @ 9:46am
Just wanted to ask the devs if 'Reversion Chapter 2' Steam keys will be made available to people who purchased either 'Groupees Build a Greenlight 2' or Indiegamestand 'Reversions'. Cheers! :)

Reversion: A Sci-Fi Adventure Game has been Greenlit and is now listed in the Steam store. For the latest information, purchase options, and discussions for Reversion: A Sci-Fi Adventure Game, please see it on the Steam Store or in the Steam Community.
Visit Store Page
For more details Visit Community Hub
For latest discussions
If you really, really want to, you can continue to the Greenlight page. Information on this page may be out of date, since all the action has moved to the areas noted above.