Store Page
Garry's Mod>  Workshop > Zaubermuffin's Workshop
This item has been removed from the community because it violates Steam Community & Content Guidelines. It is only visible to you. If you believe your item has been removed by mistake, please contact Steam Support.
This item is incompatible with Garry's Mod. Please see the instructions page for reasons why this item might not work within Garry's Mod.
Current visibility: Hidden
This item will only be visible to you, admins, and anyone marked as a creator.
Current visibility: Friends-only
This item will only be visible in searches to you, your friends, and admins. 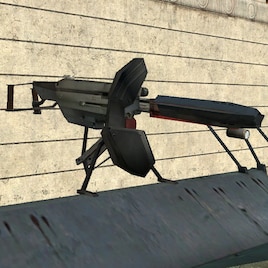 Zaubermuffin
Offline
See all 42321 collections (some may be hidden)

This item has been added to your Subscriptions. Some games will require you to relaunch them before the item will be downloaded.
Description
Who could forget the famous emplacement gun from Half-Life 2? Because the mapped ones seem to have broken in GMod, I decided to realize them as a SENT.

Features
Spawning
This SENT can only be spawned on top of a clamp (models/props_combine/combine_barricade_short01a.mdl). In case you aren't aiming at a clamp while spawning it, it will spawn a clamp for you - and automatically attach itself to it. Simply go to Entities, Half-Life 2 and select the Emplacement Gun.

Usage
To use it, simply get close to it and press your +use bind (i.e. E). While it is possible to operate it while standing in front of it, it is not recommended to do so. While handling it you can still walk around, crouch and jump as usual - however, if you get too far away, it will return into standby mode. To fire, simply click and hold your +attack bind (i.e. left mouse button), to toggle the searchlight use your flashlight/impulse 100 (i.e. F) bind. It will stay on if you leave, which makes it an excellent but deadly spotlight. To use the world no collide, rightclick it while pressing C and select "Turn world collision off". You can then move the clamp around as you please - perfect in combination with the color and weld tool.

Known bugs and list of things that won't happen
There are a few things that aren't exactly as I want them to be, however, due to limited knowledge of GMod/the Source Engine or a lack of motivation to do so, they aren't exactly fixable by me. If you find other bugs or know how to fix them, feel free to comment/SF me.

ПΛПО Dragoon Jul 18 @ 4:47pm
@hoppy_beats this mod has emplacement guns that npcs can use. https://steamcommunity.com/sharedfiles/filedetails/?id=962822928
Also thanks for making this mod!

SaikouSider Jul 16 @ 5:05pm
its in entities and in half life 2 default entities

hoppy_beats Jul 12 @ 10:42am
does anyone know a mod were theres npcs with a Emplacement gun?

dogedacwutedawg Apr 24 @ 10:41am
@Zaubermuffin That's still horrifying though. Even if we reduced the muzzle egress of the bullets by 10 degrees, a TWENTY DEGREE spray angle pattern for a machine gun means your gun would only be good for suppression.

Zaubermuffin  [author] Apr 24 @ 10:34am
It's just an estimation and probably exaggeration on my behalf. I just remember that the bullets definitely left the muzzle in an angle that probably involved a decent amount of paranormal activtiy.

AwesomeGraczGie47 Apr 23 @ 12:33pm
i understand, thanks for reply and for providing me with your point of view, cheers man!
< >