Store Page
Garry's Mod>  Workshop > RandomTBush's Workshop
This item has been removed from the community because it violates Steam Community & Content Guidelines. It is only visible to you. If you believe your item has been removed by mistake, please contact Steam Support.
This item is incompatible with Garry's Mod. Please see the instructions page for reasons why this item might not work within Garry's Mod.
Current visibility: Hidden
This item will only be visible to you, admins, and anyone marked as a creator.
Current visibility: Friends-only
This item will only be visible in searches to you, your friends, and admins. 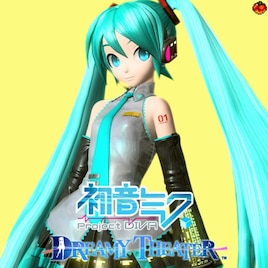 This item has been added to your Subscriptions. Some games will require you to relaunch them before the item will be downloaded.
In 1 collection by RandomTBush
Apoc and RTB's GMod Model Ports

120 items
Description
Type of addon: Ragdoll, props and Player Model
----------
Link to Source Filmmaker addons[pastebin.com]
(Extract to your Steam's SteamApps/common/SourceFilmmaker/game/usermod/ folder)
----------
This is a model pack that contains Hatsune Miku (the most well-known Vocaloid), ported from the PlayStation 3 game Project Diva: Dreamy Theater since there were a few people wanting an ''official'' Miku model. And also a few extra things like a pair of microphones, a leek and a mini Hachune figurine. Also includes a player model for some dumb reason, ignore the first two spawnlist entries for the addon with the icon in the corner if you want to use the proper ragdolls.

Don't bother asking me to port anything else from this game, the script used to import said models is all sorts of broken and it took me way too long to port as it is.
----------
Source:
----------
Contents:
----------
Recommended:
Easy Bodygroup Tool (Miku has a few bodygroups.)
----------
Thanks:
chrrox - Creator of the model-importing script used for this port
----------
Disclaimer:
Hatsune Miku is ©Crypton Future Media / Sega.
These model ports are NOT allowed to be posted on the Source Filmmaker Workshop unless I, RandomTBush, do so myself. If you see someone else uploading my content, report them!
----------
READ THIS BEFORE YOU COMMENT:
If the only reason that you clicked on this addon was to express your extreme distaste for anime, or if you feel leaving a hateful comment towards me or the original creators is acceptable behaviour, then expect to be blocked, because all you're doing is making yourself look like an idiot. Nobody cares if you don't like something. Just ignore it and move on.
Popular Discussions View All (3)

SaturnTheScorbunny Jan 30 @ 4:37pm
love the mod but where are the body groups?

MAGIKIIRO Dec 24, 2019 @ 4:53pm
nvm i might have found out why i thought her shoulder was weird, it's because i twisted it while posing her lol

MAGIKIIRO Dec 16, 2019 @ 4:29pm
only problem i got with this is that the ragdoll's left shoulder is kinda weird but otherwise this model for miku is a lot better to me so i san kyu

Anita la Huerfanita Nov 5, 2019 @ 1:14pm
Is there any possibility of bringing back the Opa Opa model?

RandomTBush  [author] Jul 31, 2019 @ 6:17pm
Jeez, there's no need for hostility. And for your information, the comment about being blocked in the description is because I was getting sick and tired of people leaving hateful comments and death threats towards me a few years back, all because I had the nerve to port an "anime" model.
< >