Greenlight > Games > pasi.kainiemi's Workshop
Greenlight is being retired. For more information on how to submit games to steam, refer to this blog post.
This item has been removed from the community because it violates Steam Community & Content Guidelines. It is only visible to you. If you believe your item has been removed by mistake, please contact Steam Support.
This item is incompatible with Greenlight. Please see the instructions page for reasons why this item might not work within Greenlight.
Current visibility: Hidden
This item will only be visible to you, admins, and anyone marked as a creator.
Current visibility: Friends-only
This item will only be visible in searches to you, your friends, and admins.
RUNNING WITH RIFLES
Description Discussions9 Announcements9 Comments870 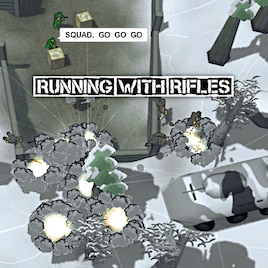 pasi.kainiemi
Offline
See all 97 collections (some may be hidden)

View RUNNING WITH RIFLES in the store

After a few months without a MP session, it's about time !

This is a bit spontaneous but let's do it!
We'll play maps that suit for 3-faction matches like Stalemate, Saint-Anne and Insular Complex.
Spread the word around!

Read More
Description
What is RUNNING WITH RIFLES?

Keep your head down SOLDIER - you’ll need it!

Pick up your rifle and join the Green, Grey or Brown army in their mission to send the enemy home in a box! RWR is an open world, top-down, tactical shooter for single player and multiplayer online, that puts you right in the middle of chaos in towns, trenches and forests turned into ruthless battlefields, controlling just one soldier in an army of several hundreds.

In a war where men die like flies and endless streams of reinforcements run to fill the void, it takes tactics and marksmanship to capture territories effectively. The open world nature of the game enables you to use a multitude of approaches to help the front line move – it's up to you to shape your role. Experience the complete arc starting as a private hardening into a high ranking officer with a squad under command, arming yourself with a variety of weapons and vehicles on your way to glory!

RUNNING WITH RIFLES is currently in public beta and is 80-90% complete. Pre-purchasing the game at {LINK REMOVED}http://www.runningwithrifles.net will gain you access to the latest beta release and all the upcoming updates including the final game when it's ready. If the game becomes greenlit in Steam, existing players will receive a key to activate the game in Steam.

RUNNING WITH RIFLES has been Greenlit and is now listed in the Steam store. For the latest information, purchase options, and discussions for RUNNING WITH RIFLES, please see it on the Steam Store or in the Steam Community.
Visit Store Page
For more details Visit Community Hub
For latest discussions
If you really, really want to, you can continue to the Greenlight page. Information on this page may be out of date, since all the action has moved to the areas noted above.