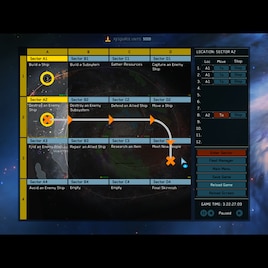 Mikali
Offline
See all 2 collections (some may be hidden)

This item has been added to your Subscriptions. Some games will require you to relaunch them before the item will be downloaded.
Description
DESCRIPTION
This demo mod modifies the game so that missions are organized in a grid- or
table-like fashion. Instead of proceeding through the singleplayer campaign in
a linear, sequential fashion, you now can exit each mission and travel to
neighboring adjacent sectors in one of the four cardinal directions. Included
is a modified and extended version of the Postmortem campaign created by
following WyvernNZ's singleplayer campaign tutorial. WyvernNZ's tutorial can be
found at this address:


INSTALLATION
If you have the Steam version of the game, you need to subscribe to the mod on
Steam Workshop, and select Mods from the game launcher. For the GOG.com version
of the game, extract the ZIP archive and copy the "DataTestMissionGrid" folder
to your "HomeworldRM" directory. Then create a new desktop shortcut, and add
the "-moddatapath DataTestMissionGrid", "-overrideBigFile", and "-luatrace"
flags to the shortcut's "Target" field. Use this shortcut from now on.

When upgrading to newer versions of this mod, make sure to first start a new
campaign by deleting the contents of the "HomeworldRM\Bin\Profiles\
(YourProfile)\TestMissionGrid" folder. This folder contains the custom save
game, as well as a number of temporary files, and the format of these files may
have changed since the last mod version. Leaving these files intact could cause
the game to crash, or other bad stuff to happen. Alternatively, you can delete
your current player profile and create a new one, but this will affect all your
other mods, as well as the vanilla HWRM campaigns. Sadly, the "Reset" button in
the Mission Select screen does not work properly with this mod, and has been
disabled.


INSTRUCTIONS
Simply start the game as you would normally. If you are using a custom desktop
shortcut to launch the game, you will be taken directly to the HWRM main menu.
If you are using Gearbox's mod launcher, make sure to select this mod, but do
*not* enable either the HW1 or HW2 campaigns! Leave both checkboxes unchecked.

In the main menu you will see many of the same menu options as in the unmodded
game. However, the first menu option will now be "TEST MISSION GRID CAMPAIGN".
Click on this, and you'll be taken to the new mission selection screen. You'll
notice that now the missions are arranged in a grid of sectors instead of a
vertical list. The positions of the sectors in the grid are intended to reflect
their physical coordinates in space. I.e. Sector D4 is "Galactic South" and
"Galactic East" of Sector A1, and Sector B2 is "Galactic West" and "Galactic
North" of Sector C3. The coordinate 000 on the in-game compass always points
toward Galactic North, and your starting fleets will always start the campaign
pointing toward Galactic East.

You start out the game with three "fleets" of ships, each lead by a capital or
super capital ship. You can change the makeup of each fleet using the "Fleet
Manager" screen (a.k.a. the "Squad Menu" screen), which is accessed by pressing
CTRL+Backslash. You can move your ships around the galaxy using the "Sector
Map" screen, which is accessed by pressing the Backslash key.

Battles take place in the "minor" gametype scope, and fleet movements take
place in the "major" gametype scope. The choice you make determines the
functions that are available to you. To switch between gametype scopes, press
the "Enter Sector" and "Leave Map" buttons. You can also leave a sector by
moving your squads onto one of four pink semi-circular exit grids. When you are
properly positioned, a button will appear on the lower half of your screen,
indicating the readiness of your fleet to travel to the adjacent sector.
Pressing the button will cause your squad to leave the map and enter hyperspace.

You can travel back to a sector that you have visited previously. However, the
sector will be considered "cleared", and will likely no longer contain the
enemies or objectives you encountered the first time you visited the sector.
I.e. you cannot "replay" a previously-completed mission like you can in the
vanilla HW1 and HW2 campaigns. Your progress through the galaxy is tracked in
the map screen by coloring "visited" sectors lighter than the default dark
color. In future versions of this mod, you will not be able to leave a sector
using the Sector Map screen until all mission objectives and enemies have been
cleared from the sector.

Note, when leaving a sector using an exit grid, you must dock all your ships
manually. As of version 0.12.0, the mod is more selective about who gets to
leave a sector and under what conditions. For instance, probes and platforms
will not follow the mothership into hyperspace, and fighters and corvettes need
to be docked with a capship first before the game will let you leave with them.
Capital ships need to be selected using the mouse, and must all be located on
top of the same exit grid. Lastly, capital ships require a hyperspace module in
order to leave, or need to be within a certain distance of another capital ship
with a hyperspace module. In a future version of this mod, any ships that are
left behind may be permanently lost

On the Sector Map screen, you can see how many ships are located in each sector
by looking at the small colored pips in the bottom-right of each cell. Red pips
represent the enemy, yellow pips an ally, and green pips your own ships. Large
hollow pips represent capital ships with shipholds; x-shaped pips represent
frigates and destroyers without shipholds; slash-shaped pips represent strike-
craft that can be docked; and tiny solid pips represent probes and platforms.
Fleets that are in transit between sectors will not be indicated using the
pips. Instead, large yellow arrows will indicate the number and direction of
fleets that are traveling in hyperspace.

On the Fleet Manager screen, ships are color-coded based on whether they have
shipholds, hyperspace capability, can dock, or none of the above. For instance,
probes and platforms are color-coded red since they cannot dock with other
ships, or travel between sectors on their own.

Lastly, nothing in the game world happens without passing time. In the "minor"
gametype scope where tactical battles occur, time proceeds as per normal. In
the "major" strategic gametype scope, however, you must advance, slow down or
stop time using the game timer in the bottom-right of the Sector Map screen.
You can pause the timer, or speed it all the way up to 60 minutes-per-second.
Further, as of version 0.15.0, enemy squad movements also proceed according to
this schedule. Enemy squads are spawned every 24 hours, and move to neighboring
sectors every few hours. If a player squad occupies the same sector as an enemy
squad, combat will start automatically.


MODIFICATION
Persistent data is recorded in the "Bin\Profiles\(YourProfile)\TestMissionGrid"
folder. Other configuration files can be found in the "Data\Scripts" folder.

• Siber who prodded me to continue working on this mod.
• WyvernNZ for his SP Campaign Creation tutorial.
• Norsehound for the galaxy map background image.
• sastrei for tips about HODs.
• shadowwinterknig, Dom2, EatThePath, Dwarfinator and everyone else for tons of
scripting help on the Gearbox forums!
Popular Discussions View All (3)

First, I'm guessing you didn't *deliberately* leave the PoH with a top speed of 800? ;)

Second, when I moved my fleet to the departure zone heading to B1 and had them jump, I stayed on the map after they left.

Third, while still on the map, opening the Sector Map and hitting the "Leave Map" button did nothing.

I was consequently stuck on the first map with no ships, unable to leave without quitting entirely. I'd already built the Scout squadron that the map required and grouped all units into a single fleet; dunno if I should've done anything different.

thino Mar 30, 2018 @ 6:00am
I think there is bug in dealing of arrival of fleets moving between sectors when player act in minor mode.
Some fleet appears suddenly in minor mode and some fleet have vanished in sector map.

thino Mar 25, 2018 @ 8:57pm
I see, an enemy fleet begins battle in minor mode
not when it enters the same sector with a player's fleet at first time but after 24 hours of that.

thino Mar 23, 2018 @ 12:22am
"Enemy squads are spawned every 24 hours, and move to neighboring
sectors every few hours. If a player squad occupies the same sector as an enemy
squad, combat will start automatically."

Does this mean the game automatically goes minor game type mode in such case?

thino Mar 7, 2018 @ 9:48am
I can fix the eroor by changing campaign name to ascension and making some files correspondent to that.
I doubt that the game engine allow other campaign name now.