Greenlight > Games > PlayAnarchyGames's Workshop
Greenlight is being retired. For more information on how to submit games to steam, refer to this blog post.
This item has been removed from the community because it violates Steam Community & Content Guidelines. It is only visible to you. If you believe your item has been removed by mistake, please contact Steam Support.
This item is incompatible with Greenlight. Please see the instructions page for reasons why this item might not work within Greenlight.
Current visibility: Hidden
This item will only be visible to you, admins, and anyone marked as a creator.
Current visibility: Friends-only
This item will only be visible in searches to you, your friends, and admins.
Devil's Cove Adventure Game
Description Discussions3 Comments162 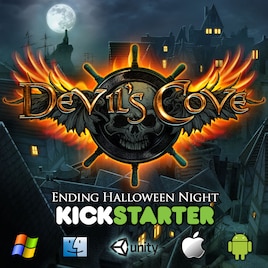 PlayAnarchyGames
Offline
See all 14 collections (some may be hidden)

What is Devil’s Cove?
The adventure centers around a sinister Plague Doctor who is wreaking havoc in the cursed harbor town of Devil’s Cove where a series of heinous crimes have been committed. The town is cowering in fear and even worse, the local authorities appear to be complicit and have silenced all who have tried to stop these tragedies. Players will return to the golden days of adventure gaming as they uncover ghastly horrors and even contribute their own diabolical ideas to the gameplay.

What’s unique about this Kickstarter project?
Devil’s Cove will be a unique game development experience where the players will truly be part of the development process. Everyone who funds Devil’s Cove will have early beta access to the game and get to help shape the final version. In addition, backers will not have to choose which platform they want the final game for - they can have it for all the supported platforms - PC, MAC, iOS, and Android! Best of all, our Kickstarter reward tiers give players the opportunity to help craft the twisted challenges, and even make a cameo as a hero or villain in the game.

What's Next?
The new golden age of adventure games is upon us. Adventure games like Double Fine and Broken Sword kicked the door down, and revealed that the players are hungry for the kinds of games that us developers have been dying to make again, but that publishers didn’t want to take a chance on. Now we’re ripping the doors off our walls and welcoming the players into our development process. The making of Devil’s Cove will be an amazing experience for everyone involved and we hope that you will join us.”

Devil's Cove is currently live on Kickstarter and ends October 31st - Halloween Night - under the full moon when all the other devils and monsters are roaming the streets!

MitchManUSA Jul 8, 2014 @ 8:02pm
im not into these types of gmaes i always wonder why they are created and stuff i know some people have a thing for them, but the biggest sore spot is the 3D element a game like this needs. then this product would stand out. i dont see success only in a small fan crowd.

Devil's Cove Adventure Game has been Greenlit and is now listed in the Steam store. For the latest information, purchase options, and discussions for Devil's Cove Adventure Game, please see it on the Steam Store or in the Steam Community.
Visit Store Page
For more details Visit Community Hub
For latest discussions
If you really, really want to, you can continue to the Greenlight page. Information on this page may be out of date, since all the action has moved to the areas noted above.