Greenlight > Games > Crowe T. Robot's Workshop
Greenlight is being retired. For more information on how to submit games to steam, refer to this blog post.
This item has been removed from the community because it violates Steam Community & Content Guidelines. It is only visible to you. If you believe your item has been removed by mistake, please contact Steam Support.
This item is incompatible with Greenlight. Please see the instructions page for reasons why this item might not work within Greenlight.
Current visibility: Hidden
This item will only be visible to you, admins, and anyone marked as a creator.
Current visibility: Friends-only
This item will only be visible in searches to you, your friends, and admins.
Project: Make
Description Discussions23 Announcements5 Comments1346 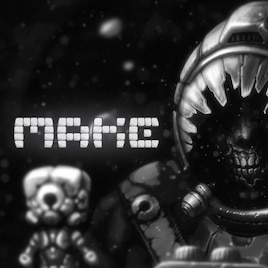 merm
Offline
See all 206 collections (some may be hidden)
Recent Announcements View All (5)
On Hold
November 29, 2013 - jumbo_spaceman

As some of you already know (via the facebook page), development has been put on hold indefinitely. Just posting here to make sure there's no confusion. Thanks for all the support and e-mails asking about the status of the project.

Thanks to a generous invitation from the fine folks at Unity, we'll be bringing a build of the MAKE prototype to GDC 2013 in San Francisco, CA. The game will be playable at the impressive Unity booth at the Moscone Convention Center, March 27 through the 30th :)

Make is a physics playground - A sandbox world with engaging game modes built on top of it. We wanted to Make something that gives you a sense of discovery and wonder - where creativity is king - a place to explore and experiment - to compete and cooperate - with your friends. The major features that define the game experience, so far, stem from these concepts.

Gravity
Make features relative gravity. There's no global up or down direction, and any surface can be a source of gravity. Simply traversing the game world becomes a unique experience. This allows us to build our levels in really interesting and unusual ways. Objects orbit and react to gravity wells. Characters run, swim, and build structures on different surfaces. It's a cool and mind-bending sight to behold, and a great place to play in.

Building
Building is at the creative heart of the game. It's simple to do, but deeply designed and as complex as you want to make it. The world of Make is home to a variety of building blocks, each with its own physical properties. You can snap these cubes to build anything from simple weapons and buildings to complex traps, circuits, and modes of transportation. The list of cubes is growing and we plan to introduce new creative and exotic types in future video updates.

Besides snapping blocks together, you get a gun that shoots grappling tethers. They work like stretchy bungee cords for anchoring, pulling and attaching things at a distance. They're conductive and you can use them to transmit signals and build circuits. They serve as a great weapon, too. The signal sent down the tether is a jolt of electricity, and if it's used on another player or enemy, it works like a taser.

Building stuff on the fly brings great, unexpected moments and perpetually evolving strategies to enemy encounters, competitive multiplayer matches, as well as unique ways to co-operate with your friends.

The gameplay experience comes in the form of both single player and multiplayer game modes that take advantage of the emergent properties of the sandbox mechanics and simulation. We started with traditional game modes like Deathmatch and a UT style Bombing Run (using our explosive cube, which makes the runner both vulnerable to attack and dangerous in close quarters), and we are working our way towards exciting new concepts that are entirely unique to the Make universe, including a uniquely structured free-form single player/co-op campaign.

FAQ
Thanks for the awesome and encouraging response, guys. We really appreciate it!

Let me take a moment to answer some of your questions:

Theme
A few of you were wondering how our cover image relates to the gameplay shown so far. The world of Make inhabits a deep fiction with a broad thematic range. The game will contain a non-linear campaign that wraps around an intriguing central plot, and all of the levels in the other game modes will expand on this fictional universe. In future updates we'll be showing more of the range of experiences you can expect. I think you will like the surprises we have in store.

Gameplay Style
Make is not just a building game. In fact, the idea is to use the sandbox elements in the context of action oriented gameplay where you set traps, build temporary cover, and create weapons to fight enemies and interact with the strange fauna of the game world. There are also very direct ways of interacting with the world if you prefer a more fast paced approach. There will be a stand-alone game mode for experimenting, as well as lots of competitive and cooperative multiplayer modes.

Other Platforms
We intend to bring the game to multiple platforms, so Linux and OSX are both on the table. We are, however, in the research phase of possibly using DX11 to allow for even more possibilities... It is still too early to tell even if we will be using DX11, and in turn which platforms will definitely be supported.

ScienceFiction97 Feb 8, 2017 @ 7:04pm
So I guess this game is given up on? Even with all of its development, it was just abandoned? Even after being greenlit and everything...