Greenlight > Games > Kuupu's Workshop
Greenlight is being retired. For more information on how to submit games to steam, refer to this blog post.
This item has been removed from the community because it violates Steam Community & Content Guidelines. It is only visible to you. If you believe your item has been removed by mistake, please contact Steam Support.
This item is incompatible with Greenlight. Please see the instructions page for reasons why this item might not work within Greenlight.
Current visibility: Hidden
This item will only be visible to you, admins, and anyone marked as a creator.
Current visibility: Friends-only
This item will only be visible in searches to you, your friends, and admins.
Exodemon
Description Discussions4 Announcements14 Comments319

Kuupu
Offline
See all 28 collections (some may be hidden)

View Exodemon in the store 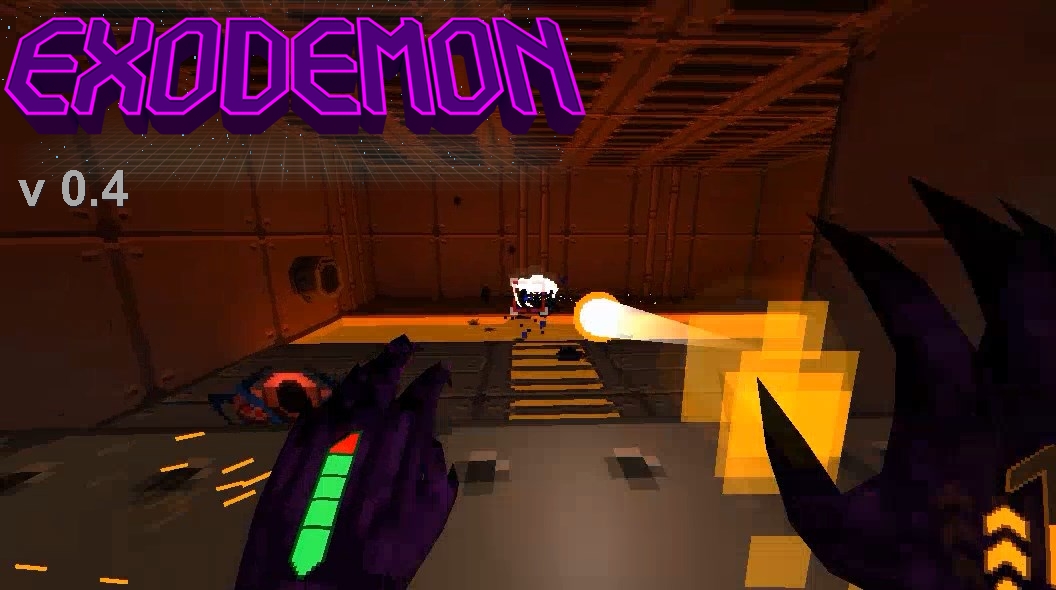 With one entirely new level (level 9), rework of all the early levels, a new weapon, refined enemies and a lot of improvements.

I hope you enjoy and sorry for taking so long to release this version.

Also we are launching a Patreon, there you can support us on a more direct way and if you are willing to make a game yourself, we can help you!
Please consider supporting us there on Patreon: https://www.patreon.com/kuupu

As noted on another update, I moved to a new home in december and I’m still trying to recover from the financial hole, so I’m working on like… 3 projects at the same time to have enough money to pay the bills.

But I had some time to work on Exodemon anyway, I was able to finish all the level design, item placement and enemy placement. :)

Here some images from the newer levels (from 22 to 27) 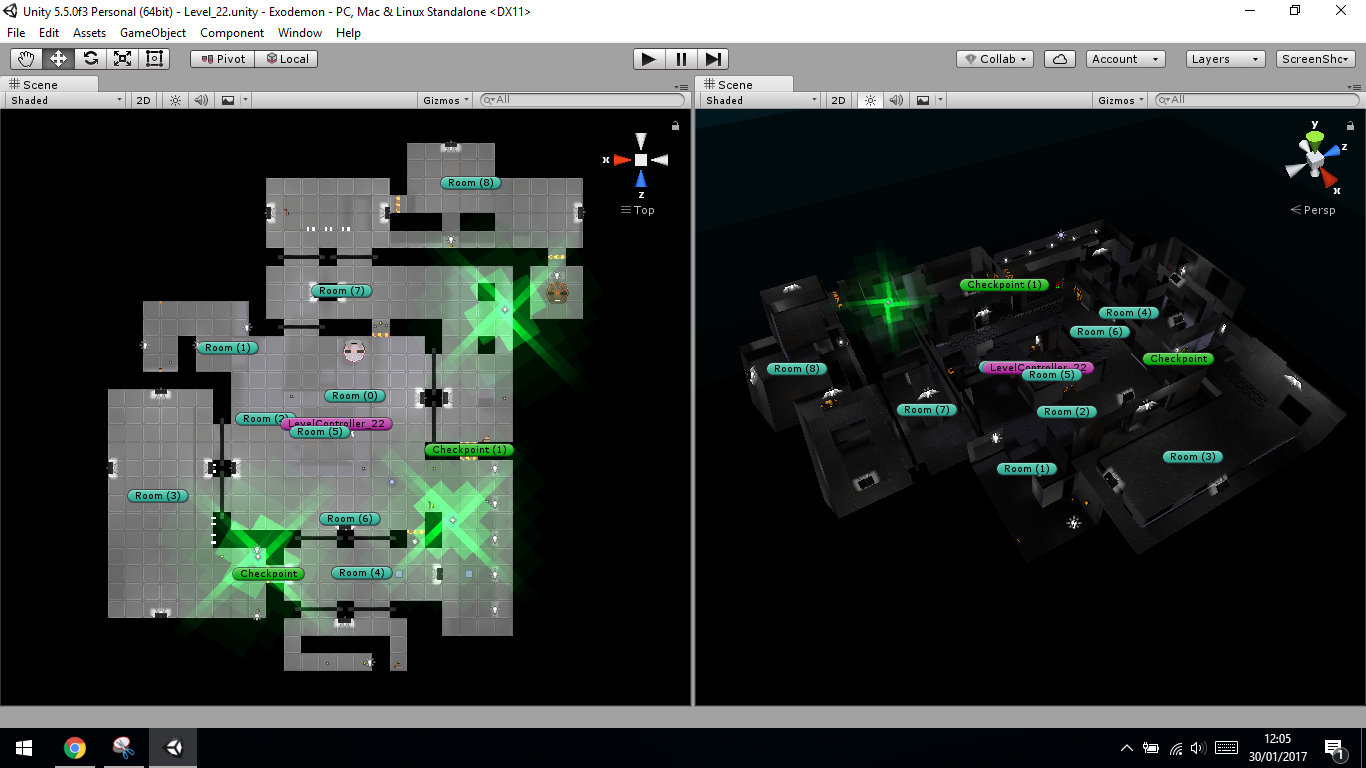 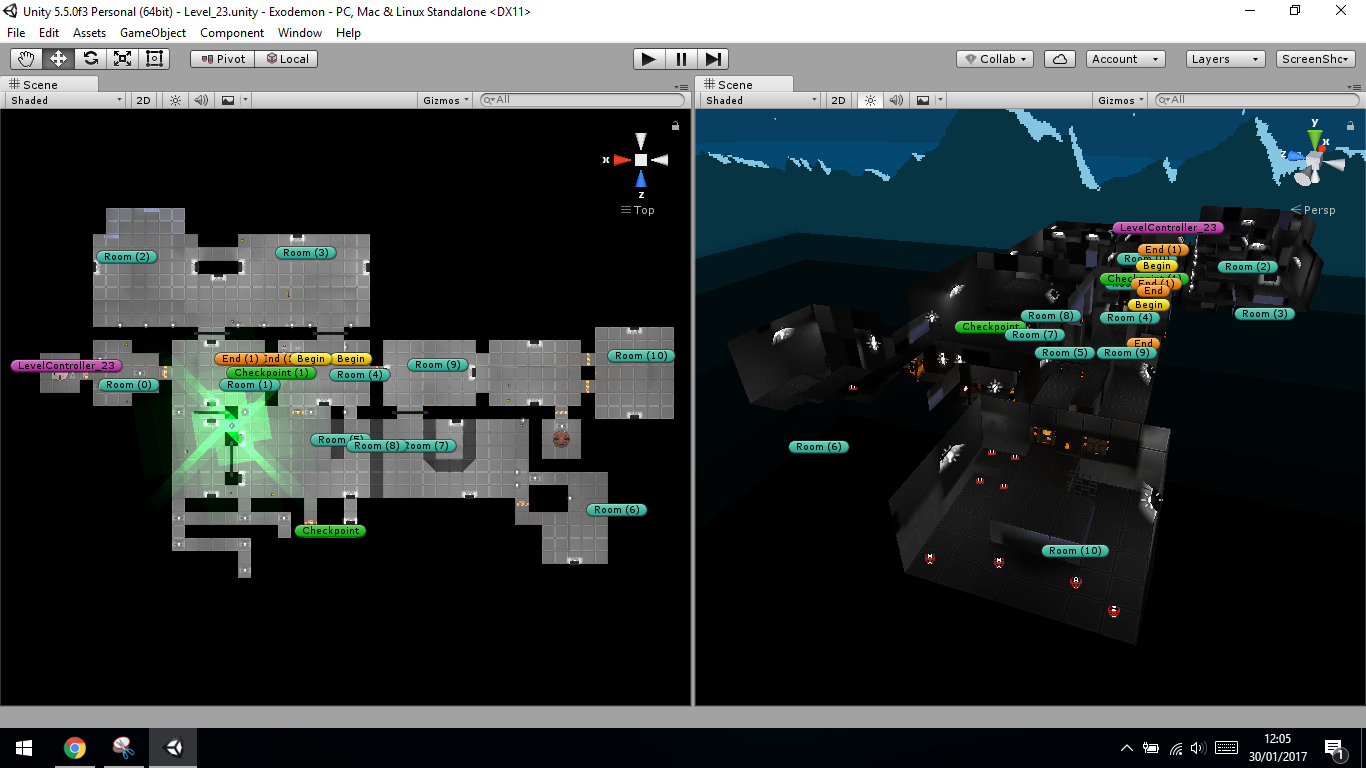 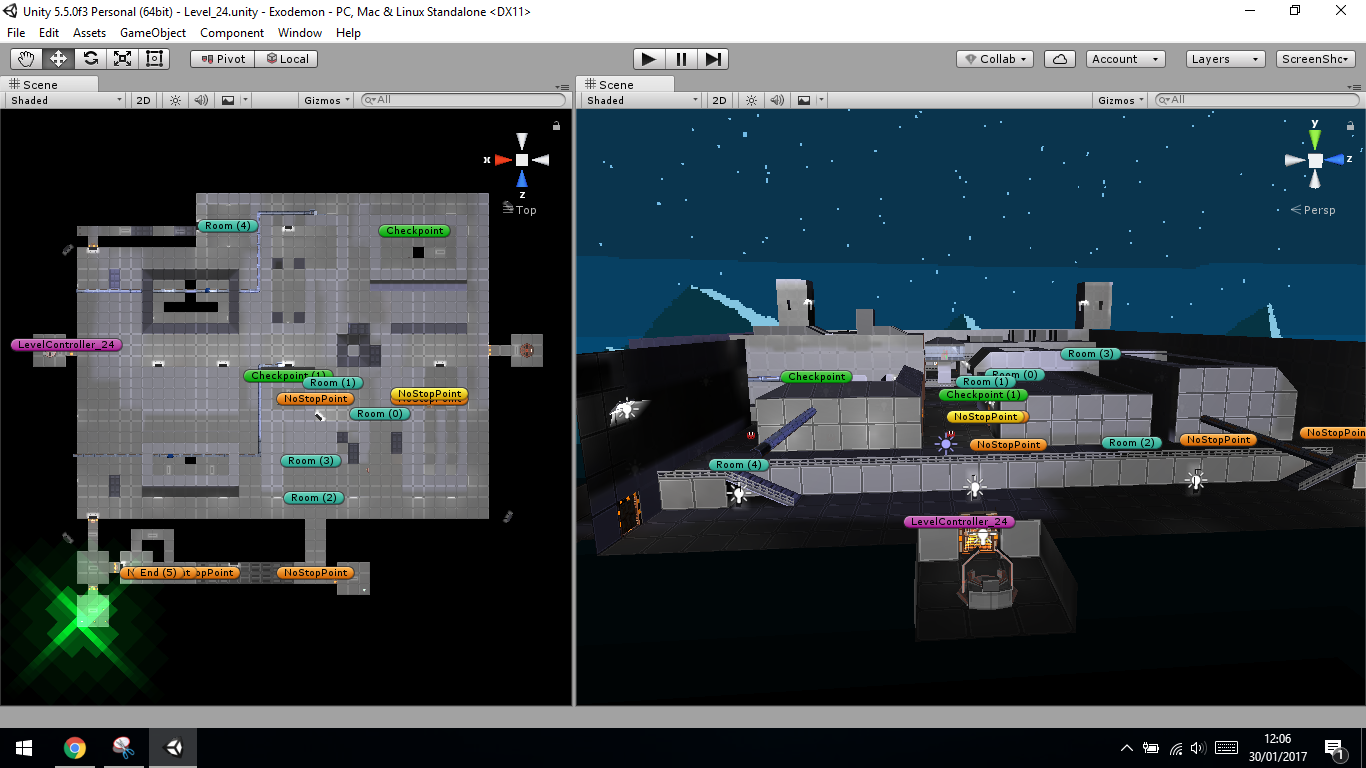 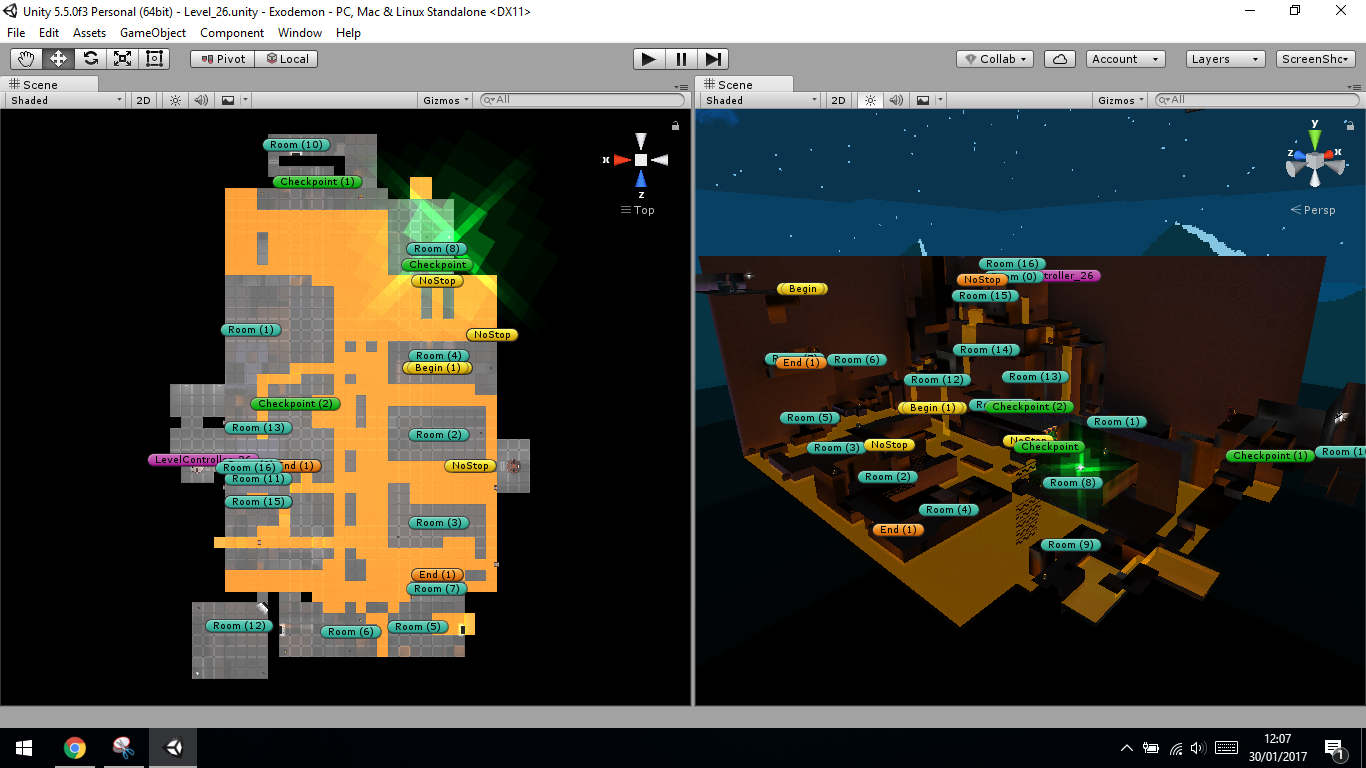 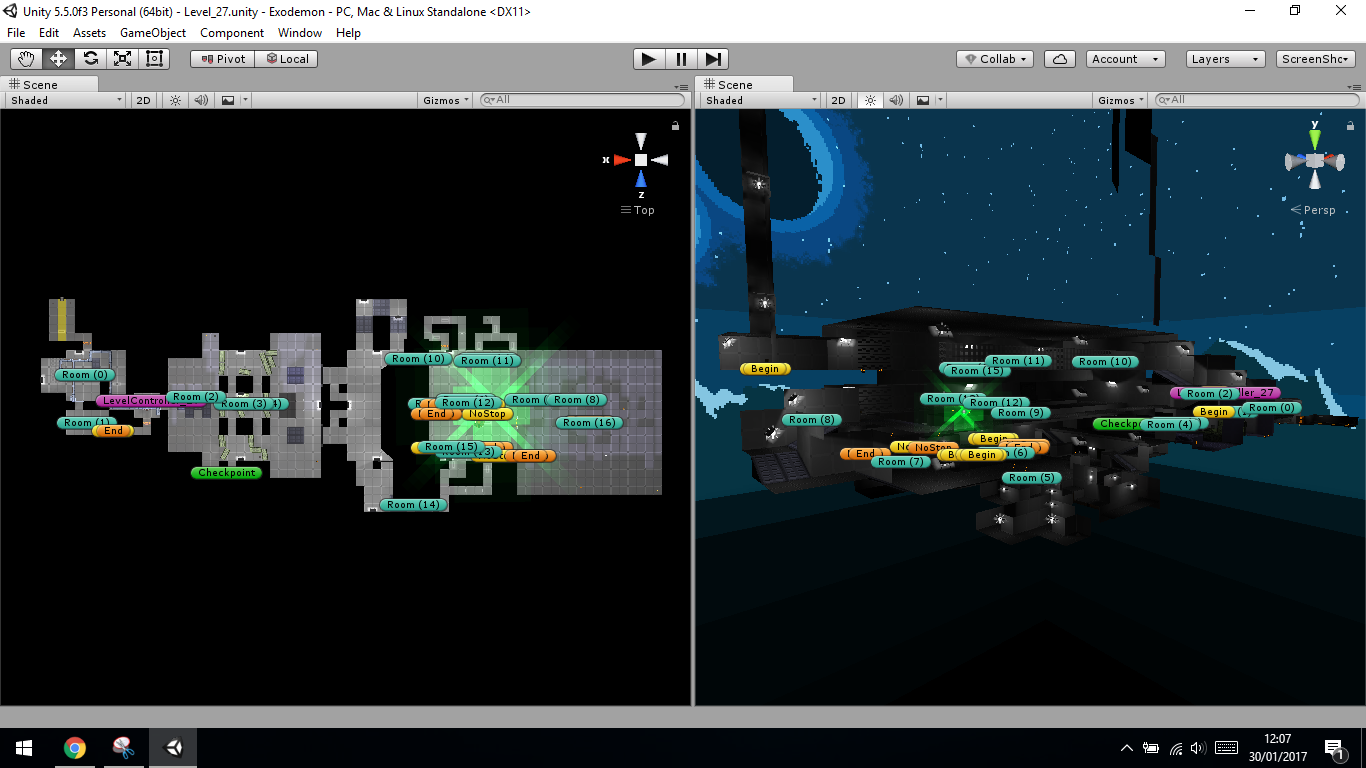 Also, I changed some information about the game in the description, such as download count, new features, and future update (because this features are already in the game).

I hope everyone can understand why this game is taking a little more to be developed, but be sure I do all I can to make it happen :D

For more information check our GameJolt page:
http://gamejolt.com/@kuupudev
And for small update, follow us on twitter:
https://twitter.com/kuupudev

Read More
Description
Release date: Early 2017
Exodemon is a fast paced first person shooter with an old-school feel. You have been possessed by an alien entity - slash and tear your enemies with your monstrous claws, find the last escape pod before you lose what's left of your humanity!

These games were always fast, bloody, explosive and, above all, respected your intelligence as the player, never holding your hand and showing the way in a childish manner.
I am using those characteristics as the guideline for the development of Exodemon, in order to capture the feel that made these games so special.

Until this point I'm developing this game alone, everything from programming, art, music, sound effects to the game design and level design. From now on Kaol Porfirio will join the development and in the near future one more person will added to the team to create the sound effects and music.

Using 3D graphics mixed with 2D sprites as in the glorious days of the best FPS games.
Each level can be explored in different ways, the most ambitious players are rewarded by finding new weapons and upgrades.

Exodemon has various obstacles to challenge you and your demonic hands!
Each section of the game is filled with treacherous enemies and colossal bosses.

Play for free at

Exodemon was originally developed under the name "Devil's Hand" during the jam LudumDare 35 in 72 hours by one person (Roni Silva).
Due to positive feedback from the community, I decided to continue to improve and extend the game.
The latest demo, in the link above, includes the main features and the first section of the game, containing 7 levels, 4 weapons, 2 enemies and 1 boss.

The community has been a pivotal part of the Exodemon's development, helping to shape the game since it's first version a few months ago.
Today I want to engage the awesome and huge steam community in order to continue to grow and improve Exodemon.

Exodemon was featured twice on Game Jolt and recently was selected as finalist to participate in one of the most traditional Brazilian game development events, the SBGames.

Exodemon reached more than 22.7k download at Game Jolt and itch.io so far, has an average score of 4.4 out of 5 and counts with several Let's Play videos on youtube.

What expect for the final version of the game:

[DFS] Mortis Jan 21, 2019 @ 9:38pm
I bet if you had a Patreon link here, people would send you money.
Multiple projects isn't an easy thing to do, and it seems everybody really enjoys this game (myself included), so you can safely assume people would help you out with budget issues.

So, progress ig going VERY slow but the game is still on
I'm working on a fulltime job developing Relic Hunters Legend at Rogue Snail and working on side projects to get some extra money, I'm planning to move to a new place by december so I need some extra cash ;)

Thank you for not forgeting about the game <o/

Mr.Humildo Jun 9, 2018 @ 4:06pm
Is the development dead? I didn't hear something from this game in almost one year and i really like it

Exodemon has been Greenlit and is now listed in the Steam store. For the latest information, purchase options, and discussions for Exodemon, please see it on the Steam Store or in the Steam Community.
Visit Store Page
For more details Visit Community Hub
For latest discussions
If you really, really want to, you can continue to the Greenlight page. Information on this page may be out of date, since all the action has moved to the areas noted above.