Store Page
RealRTCW >  Workshop > William's Workshop
This item has been removed from the community because it violates Steam Community & Content Guidelines. It is only visible to you. If you believe your item has been removed by mistake, please contact Steam Support.
This item is incompatible with RealRTCW. Please see the instructions page for reasons why this item might not work within RealRTCW.
Current visibility: Hidden
This item will only be visible to you, admins, and anyone marked as a creator.
Current visibility: Friends-only
This item will only be visible in searches to you, your friends, and admins. 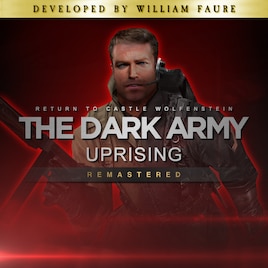 William
Offline
See all 8 collections (some may be hidden)

This item has been added to your Subscriptions. Some games will require you to relaunch them before the item will be downloaded.
Description
Ready to defy darkness? Deathshead is back to unleash the power of the philosopher's stone through his new super soldiers - will B.J. Blazkowicz survive?
The Dark Army: Uprising Remastered is an enhanced version of the famous Return to Castle Wolfenstein mod The Dark Army: Uprising, the first part of an unofficial yet solid continuation to the classic games of the Wolfenstein series. The Dark Army as a whole is aiming to bridge the gap with the latest Wolfenstein games, which are set in an alternate timeline – hence the story of this mod taking place between the events of Wolfenstein (2009) and Wolfenstein: The Old Blood, made by different studios.

Many new “huge” levels, great replayability
Prepare yourself to dive into the unknown, as you sneak beyond enemy lines within various huge and mysterious environments, which will keep you busy for a few hours, and many more if you want to explore each campaign, mode, etc…

Solid scenario, deep storytelling, movie-like cutscenes…
As a continuation to the legendary Wolfenstein classics, the scenario represents one of the most important aspects of the mod. Dive into a story that’s been thought and written by a fan, for fans. Entertainment is a key factor in this mod. Prepare for a few twists and turns as you progress in your mission, through cutscenes, radio contacts, intel…

Three campaigns
There are three campaign variants in this mod – the Day, Night and Dark campaigns. Elements like the weather, the lighting, the ambience, the enemies, their weapons, the items scattered around the maps, B.J.'s outfit... differ from one campaign to another. The most striking difference probably lies within what kind of weaponry you'll find, as each campaign has exclusive weapons. While both of the Day and Night campaigns represent the classic formula, you may also try the Dark campaign, a radically different experience. This campaign is literally filled with undead enemies, while the environment is engulfed in a bloody red fog, which grows thicker and thicker as the player progresses through the game.

New Game+
When you successfully complete a campaign, you’re automatically sent into a different one, and most of all you’ll preserve your previously acquired equipment and weaponry.

Dark Realm
The ultimate challenge. Travel into an otherworldly area, and survive...

Dynamic, modern interface
From the menus to the HUD, a lot of work went into the player’s interactive environment. Visually ergonomic, the new interface was crafted especially for Wolfenstein players.

Numerous Easter-eggs & secrets
Throughout the maps, many secrets are scattered. It’s up to you to find ‘em all.
< >
89 Comments

Globster Mar 16 @ 9:31am
What a horrible chore to play through this for the achievement. Terrible mind-numbing level design. Endless cutscenes with hard to decipher speech. But a good modding effort, I guess.

David_Sh Mar 4 @ 1:14am
Easily the best map so far out of the ones endorsed by the RealRTCW team.

Bug16 Feb 21 @ 9:27am
An update now that I've played the mod for a few hours. The map prior to the crypt was superb and what I'd call commercial quality as it's very well done. I really enjoyed the crypt map. Yes it's long but I wasn't bored. One issue is I can't get beyond this map because once I've killed the end of level boss I get the cut scene with the two proto soldiers and Death's Head then I drop into a small black room that I don't seem to be able to escape. Shame really as I was really enjoying the mod and I also won't be able to get 100% achievements for RealRTCW. :(

Bug16 Feb 19 @ 8:10am
I've only just started to play this mod and the first thing to disappoint is I can't change the cross hair to the type I prefer. The original game allows for many types of cross hair but this mod forces me to use one I actively dislike. Any chance we can have our cross hairs back?

r3lentless987 Jan 23 @ 2:55pm
by the way, I couldn't find the radio operator in the crypt level. I couldn't progress into the boss fight. So I just skipped the rest of the mission. The crypt level is very boring, there's too much walking and the map is so huge and confusing.

r3lentless987 Jan 23 @ 2:52pm
good mod, but I can barely hear the characters talking in and out of the cutscenes, and there are no subtitles either. Also, I wish I could skip the cutscenes.

Shadowderpy Jan 17 @ 10:49pm
the game keep crashing when i launch the mission after the Crypt one when deathhead capture you

1millionserenitynow Dec 11, 2021 @ 5:59pm
This mod is well put together and very true to its source. Though the sound mixing in the cutscenes needs a bit more work. Either way, it's not exactly a deal breaker. Well done, William Faure.