Community Contributor
220 XP
Long time gamer and Point & Click aficionado. Hit me up! Or better yet, join our group over at the Coalition of Point & Clickers !!!

Chudah™
Offline
An Invitation to join the best group of gamers on Steam!
If I sent you a random friend invitation it's usually because you seem to be a point and click adventure fan! If I was right, please join our group over at the Coalition of Point and Clickers!
If not I wish you happy gaming Leisure Suit Larry - Wet Dreams Don't Dry
9.6 Hours played
BottomLine at the Top: I never thought I would see the day that a true LSL game would ever be made again. An absolute must buy for fans of series and classic P&C games in general!

(Side Note: I am proud to say this will be my 100th game review posted here on Steam, and I couldn't have picked a better game for it!)

Intro:
I grew up on LSL and have been waiting for a true sequel to Love for Sail for over 20 years (we are just going to ignore the magna ♥♥♥ laude games here, as it should be). When I heard that a company had bought the rights and was making a sequel I was hit with a sense of both amazement and hesitation. After the travesty that was the aforementioned "LSL" games featuring no LARRY, I tried to temper my expectations while secretly crossing my fingers. As a true fan of this series and a P&C aficionado I can honestly say that this is a faithful "reboot" to the series that captures the humor of the original games and brings it into the 21st century!


-------------------------------------
Pros
-------------------------------------
-Literally laugh out loud funny. Even more debaucherous than previous titles. The sequence where you have to catch the rat had me in tears.
-Features original voice actor from LSL 6, 7, Laffer Utilities (name drop right there amirite?!)
-Great art style. Clean and modern but still captures that classic LSL feel.
-Fun story and plot. Perfectly brings Larry into the 21st century with lots of satire about modern dating/tropes/life in general.
-Lots of in jokes for fans of the series as well as references to other famous P&C games (monkey Island, Day of the Tentacle, etc.)
-Super stable, starts right up, no crashing or other major bugs. Made in Unity.
-Has Object/interactivity Highlight function
-Good game flow, good puzzle difficulty for the most part hits the goldilocks zone of not to hard but not too easy. Well balanced in this regard as if you get stuck trying to work on one thing you usually can proceed with another. This is an exceedingly difficult thing to get right in a quality P&C game and the way they went about it in this I found to be kind of unique. It’s almost like it gives you a "Sandbox" way to deal with puzzles. Other games can suffer from too much linearity which inevitably leads up to getting stuck due to some overlooked small thing or missed hint in game.
-Good overall length (ha phrasing.)
-Like the hidden background gags. A certain someone from LSL 7 is hiding in the background, you'll have to find him yourself ;)
-Lots of homages to classic LSL games (Including the age verification questions from LSL1!). Nostalgia factor is off the charts on this one.
-I liked the music soundtrack on this one. The dungeon club music slaps and the credit original sound is catchy.

Meh.
-------------------------------------
-So, Al Lowe did not have any major involvement in this game that I am aware of. For some of the diehard purists out there this might immediately turn them off to trying this out. All I can say is just try it.
-Larry's character design changes. Just to clarify I put this is Meh because I ultimately like the new design but again for the LSL purists out there, I know this will be something they complain about. This is an artistic liberty the developers chose to make it their own and for the game they made it works. But if we were to look over Larry's "lore" from previous games the fact that he was a short, balding, um...under endowed, loser was a big part of the joke. In this game I think they were a little less "harsh" if you will with regards to this aspect of Larry’s persona. To me they still captured Larry's awkwardness well via the whole being out of time so to speak.
-I still would have liked to see a Larry in space game (A la the ending of LSL7). Imagine the tie-ins they could have done back in the day with the Space Quest Series! But the direction they went with this one is more than fine.
-The epilogue section was kinda weird. It was an interesting taste of how I imagine the next game in the series featuring Faith as a playable character. Having a female protagonist in a LSL game is a cool homage to LSL 3 and 5 that featured Passionate Patti. I am looking forward to that mechanic and the actual playable ending with Faith was fine. But the cutscenes of the past were kind of awkward, could have been incorporated into the main story I feel like and left the epilogue purely as Faith in the boat.

-------------------------------------
Cons
-------------------------------------
-Some spelling mistakes in the written dialog boxes. This is a minor issue but for a title like this that’s asking for as much as it is, it ends up being a big faux pas.
-Also, there are some other strange issues with dialog. Things like punctuation errors, completely different words being said vs. written, incorrect voice files playing with certain actions, and one really weird thing where Larry's line was spoken by the person who he was just talking to (specifically Bea in the Leisure Suite after the "no but she really needs it!" dialogue option). Imagine if in the last Star Wars movie that Harrison Ford’s voice was accidently dubbed over something Leia said, it’d be weird right? IF this were any other game this would be such a minor gripe that I’d put it up in the Meh category but given the Brand and expectations of this game, and the overall quality otherwise it makes this issue stick out. The fact that it also has not been rectified after this game has been out for the amount of time it has is also inexcusable. If you read that and think I am holding this game to a higher standard you are absolutely right, this is LSL we're talking about here!!!
-After looking at an object, if your cursor is still on the object it won’t show the pink circled (look/use) icon but instead the regular white triangle cursor. Minor gripe but again I am purposefully being nitpicky with this one.

Final Thoughts: Overall I think this was a faithful homage to the lewd depravity that was 80's/90's adult P&C adventure gaming. Rebooting a game series this legendary in the genre for a completely different company that the original creator is a very tall order. The fact that Al Lowe's name is not on it, or a Sierra logo for that matter, made the true diehards shun this game from the get-go. But I am here to say, as someone who grew up with this series and whose own sense of humor was shaped by it and just have very fond memories of the games in general, that this is a true LSL game and I applaud the developers for their hard work. The asking price for this game makes it among the most expensive modern P&C games out there but factoring in the $ needed to get the rights to this game, the overall quality, and the care they took in being accurate to the source material I think it is justified. If it had been EA or Activision rebooting this it would be twice as expensive and a squandering cash grab (go play magna ♥♥♥ laude if you want that experience) that you’d be angry after playing. This game has killed off my skepticism for the future of this series and I am looking forward to the sequel coming out soon!

On a more personal note, I played this in 2020, a year which for me (and everyone else) has been exceptionally difficult. I can honestly say that playing this game was one of the few highlights of a year I and many others wish they could forget. So, a shoutout to the developers for really putting in the effort to a beloved series.


For more point and click goodness, check out our P&C fan Steam group over at the Coalition of Point & Clickers !!!
View all 1 comment
Achievement Showcase 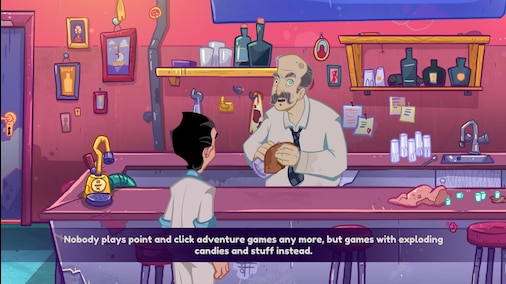 I know about 890 people who would disagree!;)

CrazyPyro69 Jan 3 @ 8:29pm
Thanks to everyone for the kind new years wishes! Here's to a hopefully much better 2021

I sent you and an invite! I might be able to help you with your group!

Talk to you soon